Altice USA lost 13,000 broadband customers in the first quarter of 2022 – a surprise since analysts were expecting the company to gain 2,000 in the period. But CEO Dexter Goei is confident that the company will see broadband subscriber growth return in the second half of the year amid the company's fiber-to-the-premises (FTTP) buildout and its plans to launch multi-gig services. 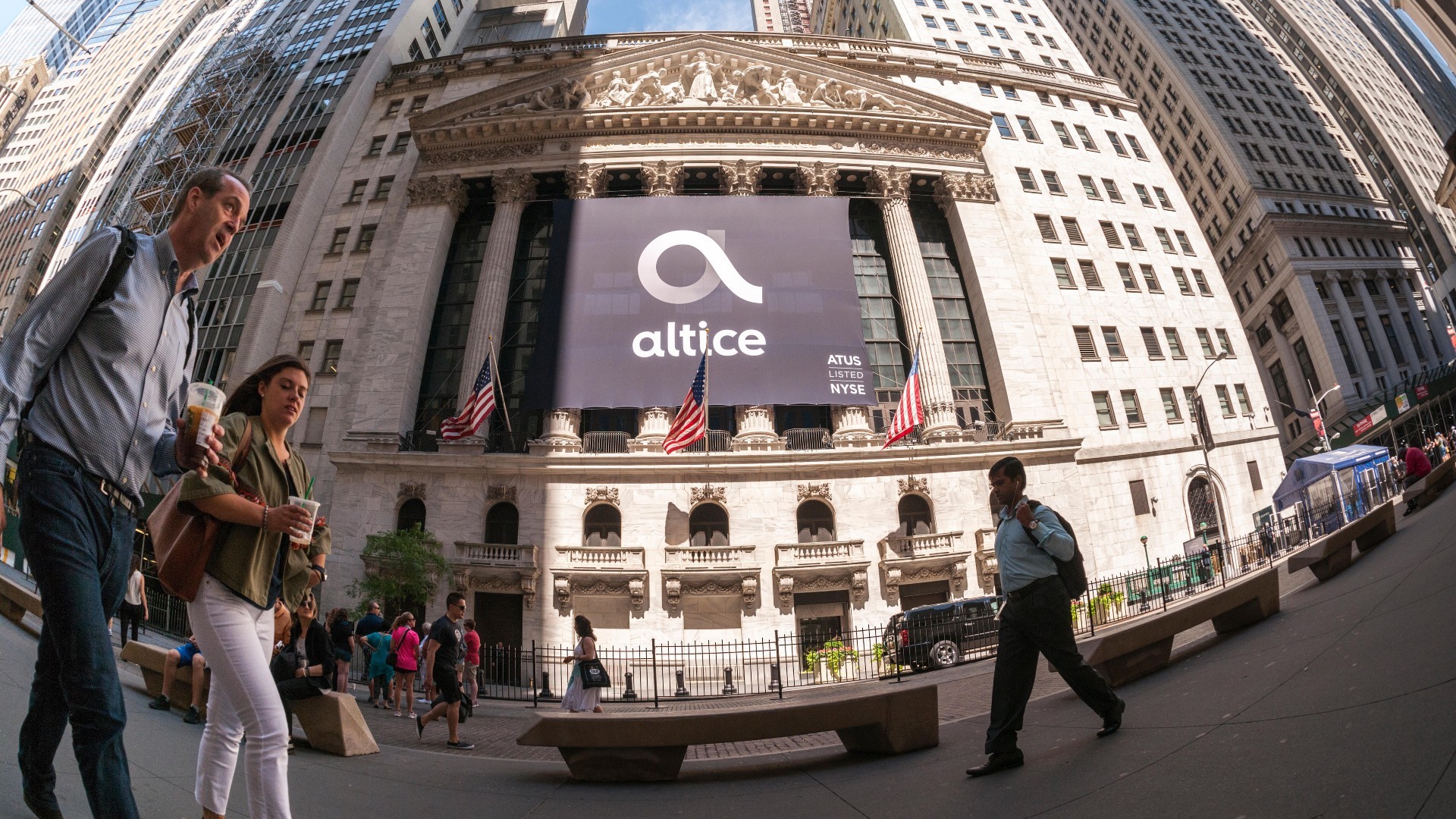 "We believe we are in a significantly better competitive position today than we were 12 months ago, and we're moving full steam ahead preparing for the launch of our own multi-gig fiber broadband service later this year on our Optimum Fiber network," Goei said late last week on the company's Q1 2022 earnings call.

His optimism follows Altice USA's plan to bring fiber and multi-gigabit speeds to more than two-thirds of its footprint, including 2.5 million homes in some of its rural Suddenlink areas, by the end of 2025. 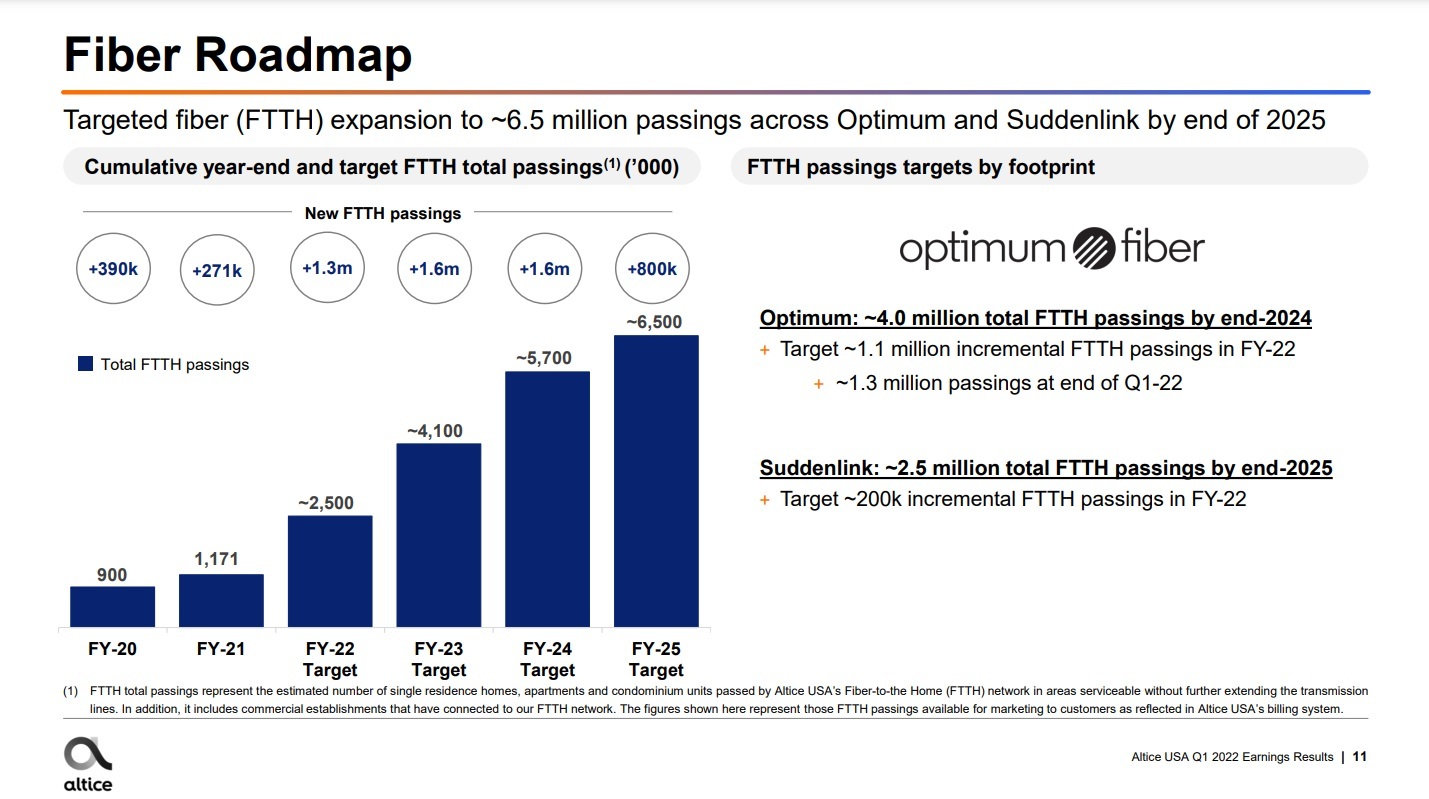 According to Altice USA's current plan, 2023 and 2024 are sizing up to be the biggest fiber network build years.
(Source: Altice USA Q1 2022 earnings presentation)
Click here for a larger version of this image.

As for the lackluster broadband results in Q1, Goei said Altice USA didn't push as hard on promotions as it did in the prior quarter (the company lost 2,000 broadband subs in Q4 2021) as the operator aligned its offers more closely to Verizon Fios. But initiatives underway, including the FTTP deployment and more attractive mobile bundles being paired with a more aggressive stance at retail, give him confidence that Altice USA will see broadband growth return in the second half of 2022.

Goei said Altice USA is on track to bring multi-gig speeds to more than two-thirds of its footprint in the next four years, ending with 6.5 million FTTP passings by the end of 2025.

Altice USA released an incremental 146,000 fiber passings in Q1 2022, for a total of more than 1.3 million passings. The bulk of that fiber deployment is in Altice's Optimum footprint in parts of New York, Connecticut and New Jersey.

The company is adding about 11,000 to 12,000 fiber subs per quarter, ending Q1 with 81,000 fiber customers. Goei said Altice USA is starting to ramp up migrations of customers on the hybrid fiber/coax (HFC) network to FTTP. "Fundamentally, we will not be offering the HFC product in areas where we have fiber available," he said.

Altice USA's 1-Gig service penetration rose to 17% in Q1 2022, up 70% from the year-ago period. Just under half of new customers are taking the 1-Gig speed tier, Goei said. The average data usage among broadband-only customers is at roughly 630 gigabytes per month, and 15% of the company's broadband-only subs are using more than 1 terabyte of data per month.

Goei said those usage trends fit well with Altice USA's fiber buildout plan. He also talked up the operational benefits of FTTP, noting that Altice USA would have to upgrade about 500,000 active components on the HFC network compared to "just a few thousand pieces of equipment" to support faster speeds to the same number of homes.

"This is why we will be able to launch multi-gig symmetrical speeds on our fiber network later this year, just by adding modules at our headends and in our field cabinets without needing to change any of the physical infrastructure," he explained.

Goei believes Altice USA is in good shape competitively with Verizon Fios, which recently began to roll out symmetrical 2-Gig services. But he acknowledged that the company is seeing pressure from Frontier Communications as the telco starts to drive fiber into pockets of Connecticut.

"But we will be fully fiberized in Connecticut by the end of this year. So I think we've got good momentum in terms of being able to address that competitive threat," Goei said.

Meanwhile, Altice USA's more rural Suddenlink footprint is facing more competition from AT&T as the telco continues ahead with its own fiber network expansion and the widespread launch of 2-Gig and 5-Gig broadband tiers.

Goei said he's still not seeing a huge competitive threat from fixed wireless access (FWA). He noted that Starry claims to cover about 15% of Altice USA's Optimum footprint, but he is only seeing them active in certain multiple-dwelling units (MDUs). Verizon added 194,000 FWA subs in Q1 2022, including 82,000 coming from business customers, but "we're not really seeing a lot of pressure there," Goei said.

"Fixed wireless best suited for low density, albeit not truly rural, markets, where mobile network congestion is likely to be a concern," Moffett explained in a research note following Altice USA's Q1 results. "That puts legacy-Suddenlink into FWA's crosshairs."

Altice USA, which recently notched a new MVNO deal with T-Mobile that gave the operator more flexible pricing options, added 12,000 mobile lines in Q1, ahead of the 7,000 expected by analysts. Altice USA ended the period with 198,000 mobile lines, good for a 4.3% penetration of its residential sub base.

Altice USA initially sold mobile under a "digital-first" strategy to limited success, but it hopes to accelerate sub growth by ramping up the retail side of the mobile business. Altice USA has opened ten new stores so far in 2022, and expects to open 75 stores this year, Goei said.