In comments filed March 24, ACA Connects urged the Commission to "avoid extraneous requirements" that would likely undermine rather than fulfill the purpose of any new rules, and it asked for the Commission to follow through on steps that would mitigate implementation burdens for smaller service providers. The organization also recommended that its constituents will need a year or more to comply with any requirements that come out of the process. 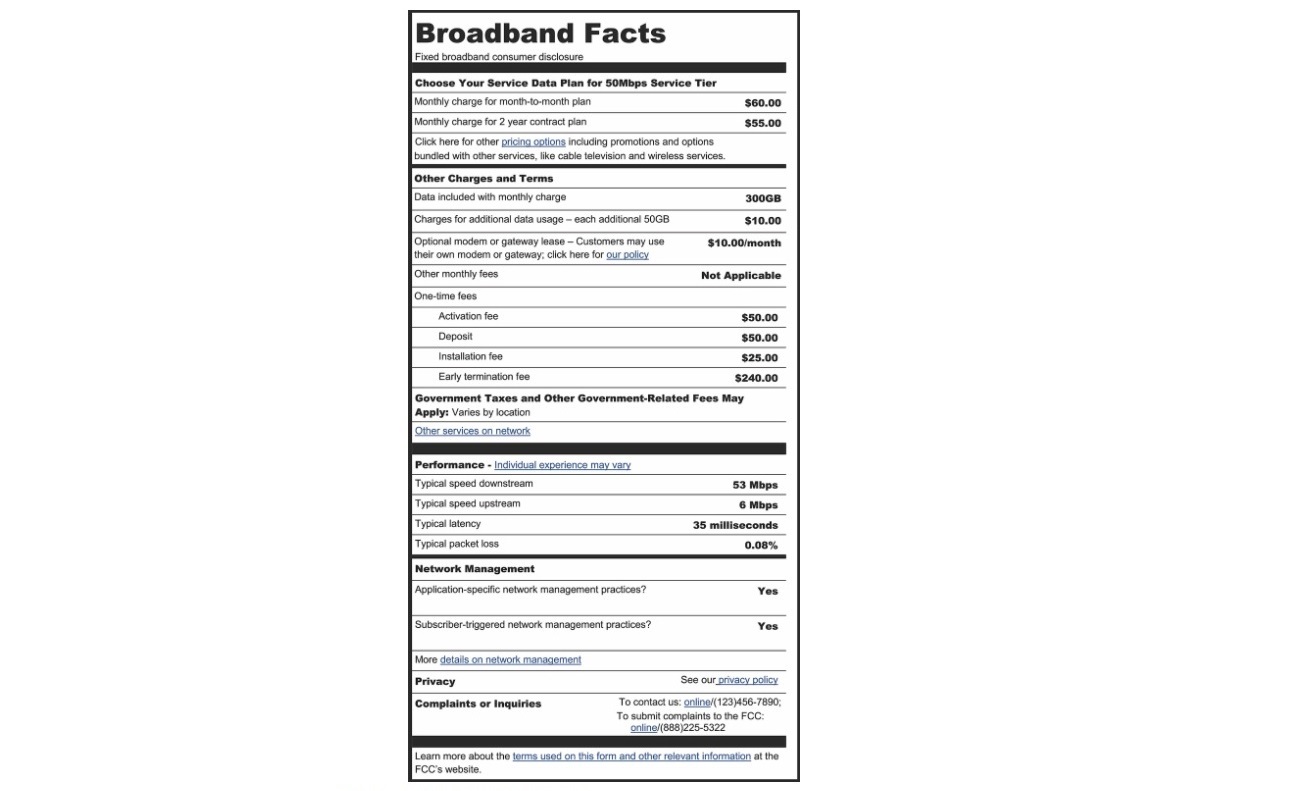 A mock-up from 2016 of the nutrition-style labeling the FCC has in mind for broadband that can help consumers comparison shop for high-speed Internet services.
Click here for a larger version of this image.
(Source: FCC)

ACA Connects' reply comments enter the picture a couple of months after the FCC voted to adopt a notice of proposed rulemaking, effectively resurrecting a plan first introduced in 2016. (Please see Broadband World News for a roundup of input from several other industry stakeholders.)

Noting that there's a "clear roadmap" for the FCC to adopt requirements for broadband labels, ACA Connects argued that there's no need for the Commission to "revisit its well-established guidelines for reporting of actual speeds and latency by fixed broadband providers ... [T]here is no evidence that the Commission's longstanding guidance for fixed broadband providers in reporting actual speeds and latency on their transparency disclosures has led to systemic or widespread deficiencies in reporting."

ACA Connects also pressed the FCC to adopt the group's suggestion to not require the reporting of packet loss on broadband labels. It's an "esoteric" metric that is "incomprehensible to the typical consumer," and not one that is easy to convey on a label," ACA Connects said.

The group also suggested that the FCC should avoid being too granular by layering in privacy practices on the face of the label. Doing so would "throw the proportions of the label out of balance and is unnecessary to enable consumers to take privacy into account when comparing providers and plans," ACA Connects argued.

The organization wants the FCC to largely follow guidance on the 2016 labels regarding how pricing information is reported. ISPs, ACA Connects added, should be allowed to report non-promotional monthly rates along with a link to a separate page that does contain promotional rates, bundles and other pricing options.

ACA Connects noted that this point is amplified by USTelecom, which held that packing all of those pricing disclosures on labels would be "unnecessarily complex and unclear for consumers" and put tremendous burdens on providers. ACA Connects also agreed with AT&T that disclosing info about the Affordable Connectivity Program (ACP) on the labels would be "too complex," but suggested that the FCC should at least provide clarification on the requirements pertaining to ACP disclosures.

ACA Connects believes guidance on "point of sale" disclosures, such as posting labels prominently on websites, is sufficient, but it wants the FCC to reject calls that labels be displayed on marketing materials. "It is simply infeasible to reproduce this amount of information in such a wide array of contexts, and attempts to do so are likely to overwhelm consumers," the group said.

A year or more is needed to comply

ACA Connects also weighed in on how much time should be allowed for compliance once the broadband label rules are adopted.

While there's been suggestions that a six-month period is sufficient to implement the labels, ACA Connects agreed with fellow cable group NCTA and AT&T that the operational complexities involved would require more time.

"Given the complexity and volume of compliance tasks involved, we urge the Commission to establish an effective date for its broadband label requirements at least one year – rather than six months – from the date of OMB [Office of Management and Budget] approval."

And should the FCC layer in more expansive requirements supported by some commenters, "even a one-year timeframe is unlikely to be sufficient," ACA Connects said.