This week in our WiCipedia roundup: SheHacks hosts largest female hackathon in world; the birth of diversity data; wear your geek on your sleeve; and more.

Join Women in Comms for an important morning of networking and discussion at our annual WiC networking breakfast event in Denver on March 22. Let's put an end to sexual harassment in the workplace. There's still time to register for this free event!
We've Always Wanted a Glow-in-the-Dark Binary Code Infinity Scarf 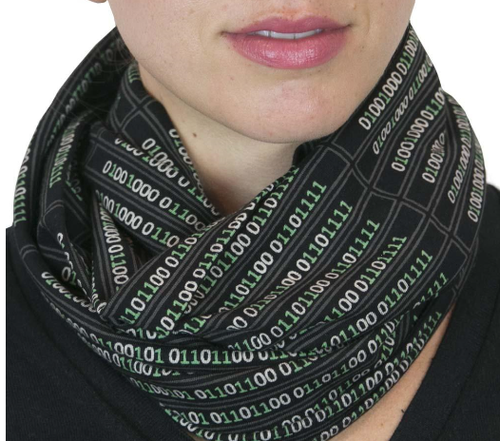 And it's solar-powered?!
(Source: Svaha)

ErynLeavens 2/9/2018 | 1:16:29 PM
Re: Spiffy scarves Totally agree, Kelsey! I think the clothing is a fun idea but their marketing has a long way to go to match the desired demographic.

The double standard for success is old and needs to go. Here's to hoping 2018 is the turning point. ; )
Reply | Post Message | MESSAGES LIST | START A BOARD

Kelsey Ziser 2/9/2018 | 9:12:13 AM
Spiffy scarves Binary code scarf is pretty cool but I looked at the website and I'm not sure how dressing like Miss Frizzle makes you "look like a scientist" in the context I think the creators were going for. The designs are interesting but seems like more of what a science teacher might wear versus an engineer at a conference. Maybe I'm too culturally conditioned?

Glamour article was interesting and I'd have to agree -- women have been stepping up and showing up for years, but if you climb too high you're "unlikeable" and "trying to hard." A male CEO, on the other hand, might be "unlikeable" but people would probably just call him "successful" and leave it at that.
Reply | Post Message | MESSAGES LIST | START A BOARD
EDUCATIONAL RESOURCES
sponsor supplied content
Accelerating Audio Processing in Wireless and VoIP Applications
Carrier Insights: Evolving the Virtualized RAN
Seamless Connectivity Fuels Industrial Innovation  Forrester Report
The importance of collaboration in creating next generation technology
Achieving low power 5G Open RAN Radios
Industrial Connectivity: Accelerating the Roadmap to Becoming Digital-First, Forrester Event
Disaggregation Ahead, Open RAN Challenges and Opportunities. A Panel with ADI, Vodafone, Facebook, Marvel
Critical Steps Telcos Can Follow to Deploy an End-to-End Open RAN Solution
Educational Resources Archive
More Blogs from WiCipedia
WiCipedia: How to tackle implicit bias and the 'lonely only'