Do you have a story – positive or negative – to share about being a woman in comms? Let us know, and take our quick survey about your experiences, right here. Anonymous submissions welcome, and the next 25 survey takers to share their email address will receive a Starbucks gift certificate!
Tweet of the Week 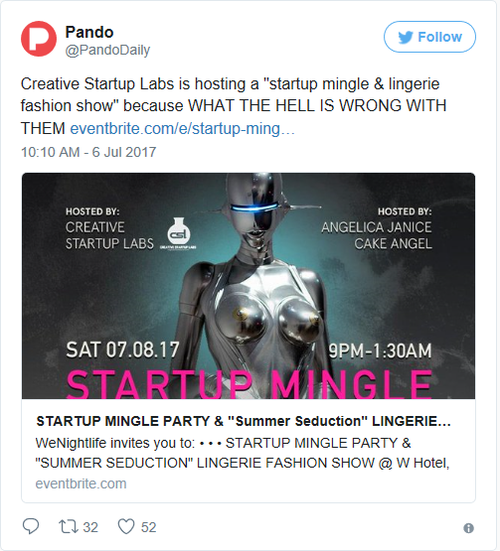 In the future, this robot is the ideal woman. 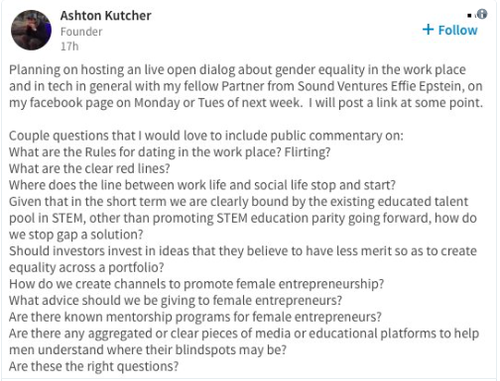 Who wants to bet that Kutcher attended the aforementioned Robot Lingerie event?!

ErynLeavens 7/14/2017 | 1:01:31 PM
Re: Tone Deaf Robots Kelsey, I agree about Kutcher. I think he gets thrown under the bus alot because of his other celebrity status and easy-to-pick-on-ness. The first question was slightly idiotic as a jumping-off point but I don't think his intentions were all bad.

Kelsey Ziser 7/14/2017 | 8:59:57 AM
Tone Deaf Robots The Creative Startup Labs networking event sounds pretty tone deaf to me and they're certainly targeting one specific audience...definitely frustrating to hear about. Also, they have a host called "Cake Angel"?!? *sigh*

Not all of Kutcher's questions are bad, but I agree, it's weird that he started the first few questions on a theme of "how can guys date their coworkers without getting in trouble?" which wholly misses the point in a dialog about gender equality.
Reply | Post Message | MESSAGES LIST | START A BOARD

Sarah Thomas 7/14/2017 | 8:10:41 AM
engineering That is great -- and surprising -- to hear about female engineering students outnumbering males in the US. It seems counter to a lot of the other stats I've heard about graduation rates and enrollment. (I hope the numbers don't change by graduation...) I'll have to dig in more to see how they break down across STEM fields and what's driving them, but that makes me hopeful!
Reply | Post Message | MESSAGES LIST | START A BOARD
EDUCATIONAL RESOURCES
sponsor supplied content
Juniper Networks Scalable IP Services Fabric for Wide Area Networks
Juniper Moves the Network Out of the Way, So You Can Focus on Customer Experience
Get Connected with Chris Lewis Podcast: Cloud-Native & Distributed Edge Architectures in SP Networks
The Open Evolutions of the 5G Network
Rakuten and Juniper Discuss the Management of O-RAN Platforms
Open, Automated, & Programmable Transport Networks: A 2022 Heavy Reading Survey
The Importance of Greater Broadband Investment by World Broadband Association (WBBA)
SD-WAN: Avoiding Costly Pitfalls When Ordering Broadband for Critical Underlay Networks
Educational Resources Archive
More Blogs from WiCipedia
WiCipedia: The importance of diversity in cryptocurrency