This week in our WiCipedia roundup: Even children's shoes are unfairly gendered; backlash galore for Google gender memo author; can being female be used as an advantage in tech?; and more.

Interested in joining Women in Comms on our mission to champion change, empower women and redress the gender imbalance in the comms industry? Visit WiC online and get in touch to learn more about how you can become a member!
The Dolly Babes Have Spoken 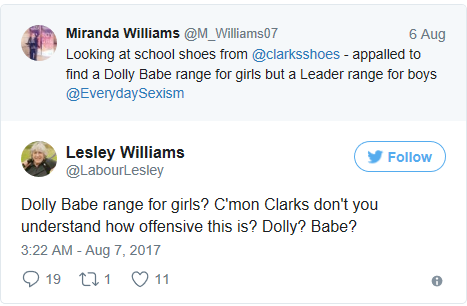 Mitch Wagner 8/18/2017 | 3:29:58 PM
Re: Foot in mouth I still recall a conversation three or four years ago with a woman friend who was the mother of a toddler. She says she was shocked, going into a clothing store, how gendered everything was.

I should note here that my friend is a tough, lesbian, self-described tomboy -- but she is simultaneously a nice Italian girl from working-class Brooklyn and knows how the world works and expects that when she goes to a children's clothing store, she will find girls' clothes that look different from boys clothes.

All she wanted was something for her little toddler daughter that had the logo of their favorite sports team on it. And she couldn't find it on the girls' side, she said -- everything there was pink and frilly and ultra-femme.

It's a small point, but sometimes the small things become a big deal precisely because they're so small.
Reply | Post Message | MESSAGES LIST | START A BOARD

PaulERainford 8/18/2017 | 9:54:53 AM
Foot in mouth Clarks is a byword in the UK for 'proper' children's shoes - parents across the land take their kids there to be fitted properly with footwear, particularly as the new school year approaches. But now it seems they want to put their fine reputation in jeopardy by employing marketing nitwits. Shame.
Reply | Post Message | MESSAGES LIST | START A BOARD
EDUCATIONAL RESOURCES
sponsor supplied content
Understanding 5G: A Practical Guide to Deploying and Operating 5G Networks
Testing 5G: Tools and Techniques for Successful Implementation, Maintenance and Monetization
Heavy Readings Accelerating Open RAN Platforms Operator Survey
How to Use A Digital Twin of the Hybrid Network Infrastructure
Transformation and 5G O-RAN
Whats in the future of 5G millimeter wave?
How to build high-performance 5G networks with vRAN?
How critical are localization and perception technologies for enhanced autonomous driving
Educational Resources Archive
More Blogs from WiCipedia
WiCipedia: 'Blind' hiring may offer solutions for women in tech