This week in our WiCipedia roundup: What's beyond Brotopia?; blockchain diversity is a priority; all-female teams; and more.

Join Women in Comms for an afternoon of workshops and networking in Austin at the fifth annual Big Communications Event NEXT WEEK on May 14. Learn from and engage with industry thought leaders and women in tech. There's still time to register and communications service providers get in free!
Beyond Brotopia
(Source: The Milken Institute) 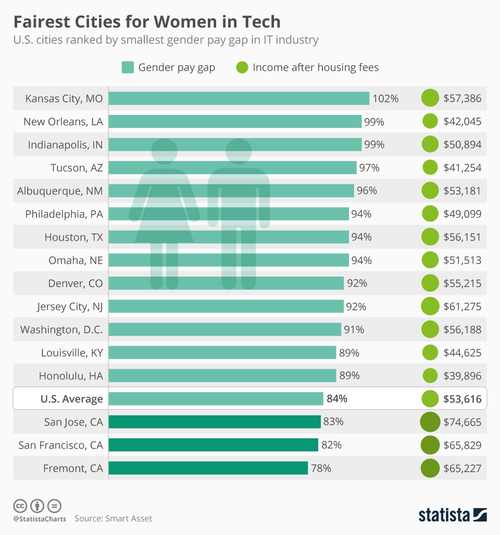 This chart wins the award for news that makes absolutely no sense.
(Source: Statista)

Like what we have to say? Click here to sign up to our daily newsletter
Related Stories
COMMENTS
Newest First | Oldest First | Threaded View
Add Comment
Be the first to post a comment regarding this story.
EDUCATIONAL RESOURCES
sponsor supplied content
Understanding 5G: A Practical Guide to Deploying and Operating 5G Networks
Testing 5G: Tools and Techniques for Successful Implementation, Maintenance and Monetization
Heavy Readings Accelerating Open RAN Platforms Operator Survey
How to Use A Digital Twin of the Hybrid Network Infrastructure
Transformation and 5G O-RAN
Whats in the future of 5G millimeter wave?
How to build high-performance 5G networks with vRAN?
How critical are localization and perception technologies for enhanced autonomous driving
Educational Resources Archive
More Blogs from WiCipedia
WiCipedia: 'Blind' hiring may offer solutions for women in tech