The Harvey Weinstein scandals were a watershed moment for the entertainment industry, according to Executive Producer Janet Leahy, who has worked on shows like Mad Men and The Cosby Show. As more harassment stories are told, more people are coming forward to speak out against the abuse. As she said, "Once you know something, you can't sit with it." (See Let's Break the Silence Around Sexual Harassment .)

At the Women in Comms breakfast session yesterday, Leahy, alongside the President of Arrow Solutions Kathy Boelter, CEO of Women of Wall Street Karen Ashworth Macfarlane and the Founder and CEO of Corporate Cowgirl Up Wendy Bohling shared their own firsthand experiences with sexual harassment, as well as their view on where workplaces, particularly in the comms industry, need to enact change. 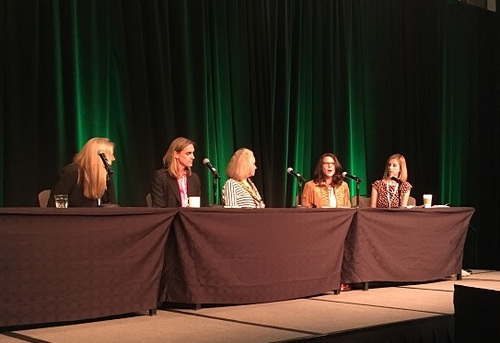 Boelter says her experience with sexual harassment has more often come from outside her office -- often clients or "a person who thinks they have power over you" is the culprit.

"This is a polarizing topic in the workforce... earlier in my career it was a lot more overt," she said. The workplace has become a much more casual environment than when she started her career -- it's commonplace for employees to be Facebook friends, text after hours and attend casual social events and as a result, sexual harassment looks much different in recent years."

"The opportunity to cross the line looks different than it did in the early days... I see coworkers or clients in more casual situations that aren't necessarily a work environment and that's where I sometimes see people crossing the line," Boelter added. "As an employer, that worries me a little bit -- how do I create an education or culture where there's a professionalism in how you conduct yourselves with each other?"

Macfarlane says on Wall Street, where she spent her early career, it was common to get together with coworkers or clients after hours, and the firms she worked for created policies that "the same rules apply when you're off your worksite as when you're on your worksite."

Both on Wall Street and in telcos, it's commonplace for employees to sign arbitration agreements which prevent them from going public with cases of harassment, says Macfarlane, but that can create an environment where individuals know they can get away with abuse.

"Until we can change the laws around protecting the corporation instead of protecting the people, we're going to have an inherent problem... my goal is to put people before the corporate structure," says Macfarlane. "If we put people first, statistics have proven over and over again that you'll have a happier, more successful company, you'll have a more diverse group of people working together... I'll be pleasantly surprised when arbitration agreements go away."

Boelter points out that her company has arbitration agreements which cover more than sexual harassment because "companies need to protect themselves in a lot of ways."

"None of this changes until there are more women at the table, and that takes a lot of intention," Bohling added, regarding the prevalence of unconscious bias and sexual harassment in the communications industry. "Bias is more subtle but it still impacts your career."

Join Women in Comms for an afternoon of workshops and networking in Austin at the fifth-annual Big Communications Event on May 14. Learn from and engage with industry thought leaders and women in tech. There's still time to register and the workshop is free!

Women of Wall Street's Macfarlane says she's witnessed where blind hiring -- when companies remove a candidates name from job applications while they're under review -- is positive in creating more diverse work environments. Another solution is grading employees and having hiring managers issue promotions based on those grades in a gender-blind manner. (See Another Reason to Promote Women in Comms.)

For lasting change to happen, men have to advocate for women and have open conversations about how their perspectives and experiences in the workplace differ, said Corporate Cowgirl Up's Bohling.

"Right now the executive suite is male-dominated... Men, you have the responsibility to change this culture and you're the only ones that can. That means wanting to learn what it's like for the only woman in the room that's on your executive team, and for actually asking how that feels and what you can do differently to support them."