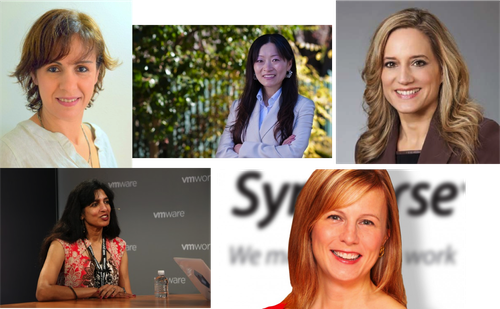 This past year has been an exciting, fast-paced one on the technology front, with a number of technologies -- including virtualization, New IP, open source, white box, IoT, 5G and telco cloud -- promising to transform the industry as we know it.

Helping to drive these incredible shifts in technology are a number of notable women from the next-gen communications industry who make up our shortlist for the "Hedy Lamarr Award for Female Tech Pioneer of the Year." This award seeks to recognize "a woman in the next-gen comms industry for her remarkable influence and technological contributions to the sector in the past year."

And, as a reminder, we've named it for Lamarr because while she was a famous, often underestimated actress. She also co-invented the spread spectrum technology in the 1950s that serves as the backbone of digital communications today. (See Be a WiC Leading Light, Like Hedy Lamarr!)

Here is our list of five finalists that we know would make Lamarr proud for the work they've done on NFV, telco cloud, LTE interconnect, security, video and more. (See Women in Comms Leading Lights: The Finalists.)

The winner will be announced at the Leading Lights Awards dinner, which will be held during the evening of Monday, May 23, at the Hotel Ella in Austin, Texas, following WiC's one-day conference and job fair ahead of the Big Communications Event.

Chloe Ma, Senior Director, Marketing, Mellanox
At interconnect company Mellanox Technologies Ltd. (Nasdaq: MLNX), Ma is responsible for driving adoption of the vendor's cloud, SDN/NFV and Open Composable Networks technologies amongst network operators, which means also convincing them to undertake a complete network and cloud transformation using open-source software and open-design hardware. It's a wholesale change for operators in a lot of cases, but Mellanox has made a lot of headway in the past year with Ma's help.

Jayshree Ullal, CEO, Arista Networks
Ullal has had an impressive career in the comms industry since the early 1990s, but has taken things to the next level as CEO of Arista Networks Inc. She spearheaded the development of the infrastructure vendor's Extensible Operating System (EOS), an open, standards-based, fully programmable network operating system that powers the switches and routers for the Internet, used in data centers, cloud computing, high-performance computing and high-frequency trading. She is helping operators transform their networks so they are free from proprietary systems and vendor lock-in. In the past year, Arista has introduced additional cloud networking technologies, including the Arista 7500E/7500R Series, CloudVision and NetDB, based on EOS.

Also of note, Arista's success under Ullal has caught the ire of Cisco Systems Inc. (Nasdaq: CSCO), which is going after the company in court for alleged patent infringement. Despite the legal distraction, Ullal has held her own and continues to deliver stellar financials and innovation for the company.

Mary Clark, CMO, Syniverse
As the CMO of Syniverse Technologies LLC , Clark's job is to help brands and mobile operators understand how to take advantage of consumers' most personal device -- their mobile phones -- in a way that augments the experience rather than takes away from it. She focuses on enabling technologies like mobile banking, mobile hotel check-ins and location-based retail discounts.

Perhaps most importantly, in the past year, Clark has played an integral role in LTE interoperability, helping address a big pain point for international travelers, and tackled the issue of mobile privacy, working with other industry players to overcome consumers' non-trivial privacy concerns .

With LightSEC, it was Barda's vision to bring together NFV and cyber security -- something not traditionally done in the industry -- to create a flexible, easily programmable security system that would grow with networks as they became increasingly large and software-defined. She also championed the open strategy that became the backbone of ECI's ELASTIC networks platform and has made big data analytics an integral part of all its offerings.

Yvette Kanouff, Senior Vice President/General Manager, Service Provider Business, Cisco
In March, Kanouff was promoted at Cisco Systems Inc. (Nasdaq: CSCO) to lead its service provider business group, an endorsement of what's been an outstanding career and incredible past year of technological innovation at the company. She was previously in charge of Cisco's cloud virtualization and video strategies as the SVP and GM of Cloud Solutions, and helped the company give competitors like Juniper Networks Inc. (NYSE: JNPR) a run for their money. Under her direction, Cisco built up its cloud-enabled video portfolio to include live, linear, on-demand and over-the-top TV services to multiple screens, as well as led efforts to enhance Cisco's software-as-a-service, NFV and hybrid cloud offerings.

In her new role, Kanouff leads the development strategy for Ciscos service provider segment, including core routing, switching and optical networking, network and service virtualization, service provider access networks for mobility, cable, wireless, cloud and video software and solutions -- new responsibilities that make her an executive to continue to keep an eye on next year as well.

Mitch Wagner 5/31/2016 | 5:25:24 PM
Re: Hedy Lamarr I expect she faced far more sexism than she would have faced today, compounded by the fact that she was both a movie actress and a sex symbol.

On the other hand, a surprising number of people then were capable of overlooking prejudice and seeing what was plainly in front of them.

kq4ym 5/29/2016 | 10:56:10 AM
Re: Hedy Lamarr I wonder haw the real Lamar was taken seriously by those working during the war years. As it was all hush hush secret stuff at the time, it's no wonder that outside the tech industry most folks don't realize our spread spectrum technology was all due to her. pioneering thinking and efforts.
Reply | Post Message | MESSAGES LIST | START A BOARD

Kelsey Ziser 5/18/2016 | 5:19:43 PM
Re: Great group of finalists Wow, talk about movers and shakers! Great to see so many amazing women behind huge industry changes.
Reply | Post Message | MESSAGES LIST | START A BOARD

Kelly Anderson 5/18/2016 | 3:23:37 PM
Great group of finalists I am thrilled to see Yvette's name on there. She has had such an impactful, industry changing career. She embodies the "Tech Pioneer" title fully.
Reply | Post Message | MESSAGES LIST | START A BOARD