THE HAGUE -- SDN NFV World Congress 2018 -- France's Orange has estimated that as many as 50,000 employees, equaling about one third of its entire global workforce, may need "reskilling" if it is to avoid falling well behind cloud providers such as Amazon Web Services and Microsoft Azure, it emerged at an industry conference today.

The French telecom incumbent, which had exactly 149,031 employees on its books at the end of June, has been struggling to bridge the gap between network and IT skills as it tries to make its business run more like a software-driven Internet company, and less like an old-fashioned telco.

Jehanne Savi, who leads the Orange (NYSE: FTE) all-IP and on-demand networks program, said the overhaul would have implications for staff in other parts of the business.

"We have estimated in Orange that we need to reskill an order of magnitude of 50,000 people," she said on a panel session at this week's SDN NFV World Congress in The Hague. Besides technical staff, employees who work in sales and marketing functions and departments related to procurement may also need to be retrained, Savi told conference attendees. "This figure is quite a number." 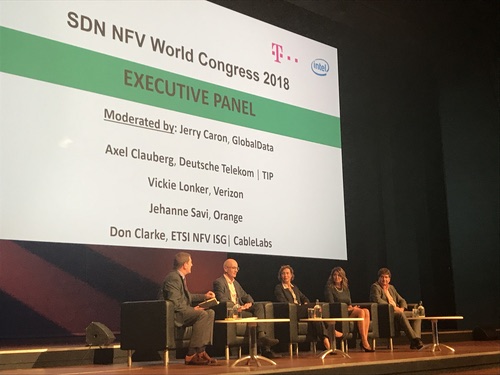 The disclosure came shortly after Savi had complained during a keynote presentation about the scarcity of skills in the telco ecosystem and urged the industry to work together on ensuring the education system is properly aligned with telco needs.

"It is something we should act on by thinking not only about internal transformation but also about the education pipe that provides us with appropriate resources," said Savi. "We must act so we are able to get new talent and this is quite demanding because we are mixing the two worlds -- the network world and the IT world."

The issue is pressing as operators try to lure software experts attracted to jobs within Internet companies like Google (Nasdaq: GOOG) and Facebook. Pay could be one issue for telcos. Media reports earlier this year indicated that a median salary at Facebook is around $240,000. While pay data for European operators is not readily available, Deutsche Telekom AG (NYSE: DT), Europe's biggest operator, had personnel costs of about 71,000 ($81,500) per employee in 2017. Regardless of wages, telcos have also lacked the zeitgeisty appeal of the web players, a shortcoming that will become more pronounced if operators continue to cede ground. (See Fat Cats Get Fatter as Jobs Go to the Dogs.)

Don Clarke, an architect at CableLabs and key figure within the European Telecommunications Standards Institute (ETSI) specifications body, said he was optimistic about progress within educational institutions, noting that some now offer courses on software techniques in a network environment. The issue of internal skills and reorganization is a "whole different boardgame," he acknowledges. "You need to bring network and IT competencies together, not necessarily in the same people but certainly in the same teams," he said.

That approach is the one Verizon Communications Inc. (NYSE: VZ) has taken to reskilling its technical teams, according to Vickie Lonker, a vice president of network and security product management at the US operator. "It is about putting many different carbon life forms together," she said. "We had an expert in machine learning who recently joined and she brought a whole new perspective."

Reskilling will entail a considerable investment for telcos while service revenues remain under pressure from competitive and regulatory forces. It will also happen as operators continue to shed staff whose roles have been made obsolete by automation and the rollout of digital technologies. Orange's overall headcount fell from 155,202 employees at the end of 2016 to the end-June figure of 149,031, and more than 1,000 employees left in the recent April-to-June quarter, its latest financial report shows. (See Big Telcos Have Slashed 107K Jobs Since 2015.)

"It is not just about investment in technology but also on the human side," Savi told attendees, emphasizing the importance of the reskilling initiative. "For the telco to become a software telco we need these assets."

As well as training up staff on new IT systems, Orange and other telcos have also recognized a need to introduce the requisite "soft skills" into their organizations if they are to speed up service development and emulate the cloud providers. "What is important is not only the ability to manage SDN [software-defined networking] and NFV but also the soft skills and the ability to manage small streams and to act and fail fast," said Savi.

Axel Clauberg, a technology vice president at Deutsche Telekom AG (NYSE: DT), has expressed similar concern about the skills shortage and cultural transformation that telcos now face. If operators are to realize the full benefits of virtualization, they will have to assume greater responsibility for systems integration than in today's world, he said at today's event. (See DT's Terastream: A Bigger Splash?)

"In order to do that we need skilled people and it is hard to get that," said Clauberg during a keynote presentation.