Vodafone Rewards Top Brass as Thousands of Staff Are Axed

Vodafone cut thousands of jobs across its international operations in its recent fiscal year as top executives collected millions more in annual compensation, according to the operator's just-published annual report.

Figures released at the end of last week show that Vodafone Group plc (NYSE: VOD) cut 5,421 jobs in the fiscal year ending in March this year, or nearly 5% of its total headcount (a reduction due only in part to the divestment of its Dutch business).

The cuts happened as Vittorio Colao, who is stepping down from the CEO role later this year, saw his overall compensation rise to nearly 8 million ($9.4 million), from around 6.3 million ($7.4 million) a year earlier, thanks in part to bonus payments. (See Eurobites: Colao to leave Vodafone in the fall.)

The pay increases for Colao and Read may come as no surprise given profitability improvements at Vodafone and the success of earlier investments in network operations. In that respect, they are certainly not as controversial as the recent pay rise for BT Group plc (NYSE: BT; London: BTA) CEO Gavin Patterson, who is under pressure from shareholders over his management of the UK's ailing fixed-line incumbent. (See BT to Slash 8% of Jobs in Efficiency Drive, BT's Patterson Gets Tasty CEO Bonus as Troops Suffer, Eurobites: BT Shareholders Call for Patterson's Head and BT's Patterson May Be Running Out of Time.) 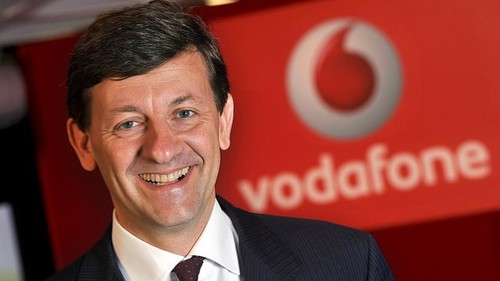 Vodafone CEO Vittorio Colao has seen his compensation rise as the operator's headcount has dipped.

But the move to reward Vodafone's top brass even as an efficiency drive was claiming jobs may still seem morally questionable to critics. It could feed into an unsettling narrative that company bosses are getting richer while automation, industry consolidation and the pursuit of bigger profits force others out of work.

US-headquartered CenturyLink Inc. (NYSE: CTL) is another example of a Tier 1 telco that has similarly announced a generous pay deal for its departing CEO while planning hefty cuts to the workforce. (See Automation, M&A Lead to 1,000+ Job Losses at CenturyLink.)

The divestment of Vodafone's business in the Netherlands, which was merged with a cable business owned by Liberty Global Inc. (Nasdaq: LBTY) at the end of 2016, appears to account for a sizeable chunk of the job reductions detailed in the operator's annual report. But even when operations in the Netherlands are excluded, headcount fell by more than 2,300.

One set of figures shows that Vodafone had an average of 106,135 employees in the recent fiscal year, down from 111,556 in the previous year. Another set, which does not include the Dutch operations, shows headcount at 103,564, compared with 105,870 a year earlier.

Responding to questions from Light Reading, a Vodafone spokesperson said the first set of numbers was published in accordance with UK reporting standards and covers both full- and part-time employees. The second set treats people on a full-time equivalent basis, meaning someone who works 20 hours per week might be counted as 0.54 of an employee.

The variance between the previous two fiscal years is mainly a result of omitting employees in the Netherlands from last year's figures, he said.

Vodafone recently attributed a sharp increase in profitability to cost-cutting efforts. Despite a 2.2% drop in revenues during the most recent fiscal year, to around 46.6 billion ($54.6 billion), its operating profits were up by 15.4% to 4.3 billion ($5 billion).

According to the first set of headcount figures, staff numbers were relatively stable at Vodafone's Italian and Spanish operations, but the operator looks to have cut 760 jobs in Germany and 859 in the UK. Those cuts represent about 5.2% of the German workforce and 6.5% of jobs at the UK subsidiary.

There were also more than 2,000 job cuts at the Indian business, which Vodafone is merging with local rival Idea Cellular Ltd. to create a new market leader.

A staffing increase at Vodafone's common functions unit, with employee numbers rising more than 3,000, to about 24,400, helped to offset the reductions elsewhere.

Like other major telcos, Vodafone is trying to automate and digitize its operations in response to new business challenges and customer demands, although a spokesperson previously told Light Reading that automation was mainly about improving customer services, rather than cutting jobs. (See Vodafone Prioritizes Automation as Efficiency Bolsters Margins and Chatbot Takes Charge: Vodafone's Customer Services Overhaul.)

Reporting full-year figures last month, Vodafone said that it saw "substantial scope" for automating processes in IT and network operations, back-office functions and other administrative areas. It has set up an "automation unit" at its shared service centers, indicating that around 200 "bots" were active in that unit in the first three months of 2018.

Pay data published by Vodafone also points to a reduction in average wages across the group. That was probably a result of the Dutch divestment, with the operator waving goodbye to executives across the pay scale at Vodafone Netherlands.

Compensation was up sharply for Vodafone's top brass, however. Colao took home a quarter more in overall remuneration despite the lackluster sales performance in the recent fiscal year and an 11.5% drop in Vodafone's share price on the London stock exchange during the past 12 months.

Vodafone's spokesperson rejected criticism that Colao's pay deal was overly generous and said the increase in his and Read's compensation was mainly due to an increase in long-term incentive payouts for the year under review.

"The global long-term incentive [GLTI] award was based on free cash flow performance multiplied by our total shareholder return performance, the latter of which was significantly above the median of our peer group, resulting in overall vesting above target," he said in emailed comments. "Vodafone has stretching GLTI targets that do not pay out for underperformance -- the average vesting over the last three years is 45% of maximum."

Bengt Nordström, the CEO of the Northstream consulting business, says Colao deserves credit for making improvements to various operating subsidiaries. "The share price development hasn't been great, but he has fixed a number of problems they had, like under-investment in networks," he says.

The Italian executive also recently claimed victory in his negotiations to acquire several more businesses from Liberty Global, including its large Unitymedia operation in Germany. The deal, which is vehemently opposed by German incumbent Deutsche Telekom AG (NYSE: DT), would create a new cable giant in the German market. (See DT CEO to Fight Vodafone-Liberty Deal.)

Vodafone is confident of getting the transaction past European competition authorities, but Deutsche Telekom CEO Timotheus Höttges clearly wants German regulators to intervene and block the arrangement. Analyst firm CCS Insight has also expressed doubts that a deal will go ahead in its planned form.

Whatever the outcome, Colao will not be at Vodafone to see it. He is due to leave Vodafone in October, when Read will take the reins. When he does leave, though, he won't need to worry about where his next pay check is coming from.

Phil_Britt 6/18/2018 | 9:40:35 AM
Re: Sounds American Unfortunately, because it's no longer the American (and some Europenan countries) way. It's the trickle up theory. Look at any recent comparisons of top executive pay to line worker pay and compare that to the difference 40 years ago. More and more it's the haves and have-nots, with the middle dwindling to near non-existant.
Reply | Post Message | MESSAGES LIST | START A BOARD

kq4ym 6/18/2018 | 8:55:13 AM
Re: Sounds American Since top execs are rewarded for increasing profits, why not reward the dismissed employees handsomly for their contributions to that same profitability and for a bonus reward for losing their jobs despite their contribution?
Reply | Post Message | MESSAGES LIST | START A BOARD

iainmorris 6/6/2018 | 3:33:51 PM
Update This story has been updated since it was first published to incorporate feedback and comments from Vodafone.
Reply | Post Message | MESSAGES LIST | START A BOARD

Phil_Britt 6/5/2018 | 8:55:25 AM
Sounds American Many of the largest U.S. corporations have been doing the same thing for many years. Looks like this practice now going worldwide.