Twenty-one major telcos tracked by Light Reading collectively shed more than 44,000 jobs in 2018 and in the last three years have cut nearly 127,000 roles, equal to about 7% of their total workforce in 2015, as they streamlined operations and merged assets.

The savage cuts are a sign of upheaval across the entire industry, parts of which now face an existential crisis. Struggling to boost sales as they funnel cash into expensive 5G networks, traditional service providers are being squeezed out of business opportunities by faster-moving Internet companies.

Where regulation permits, operators have seen merger activity as a potential answer to their problems. Under pressure from Internet firms and investors, they are also taking advantage of new technologies to automate tasks previously assigned to employees. 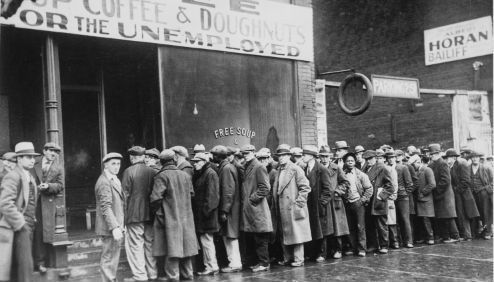 Those twin forces are hitting staff like a hurricane. US telco giant AT&T last year slashed 11,780 jobs across its telecom empire and the Time Warner TV business it acquired in June 2018, a figure equal to about 4% of the combined workforce in December 2017. Cuts at Verizon, AT&T's number-one rival, went even deeper. The 10,900 jobs that disappeared in 2018 represent about 7% of Verizon's headcount at the end of 2017.

The cutbacks are not confined to the US. The UK's Vodafone cut more than 7,000 jobs from its books in 2018, equating to 7% of its global staff numbers. Sharp reductions in India -- where Vodafone merged with local rival Idea Cellular -- were largely responsible. But Vodafone has also taken an axe to its UK workforce after introducing an automated customer care system called TOBi, which answers queries once handled by assistants. Layoffs are now planned in Europe: Vodafone aims to cut nearly one quarter of all jobs in Spain and a fifth in Italy, where TOBi is being launched.

Other telcos making hefty reductions include CenturyLink in the US and Telenor, a multinational operator with headquarters in Norway. A filing with the US Securities and Exchange Commission shows that CenturyLink cut around 6,000 jobs last year, equaling 12% of its overall headcount in December 2017, after it acquired rival operator Level 3. Responding to a Light Reading query about the scale of those cuts, a CenturyLink spokesperson blamed them on the removal of "redundant positions," following the Level 3 takeover, plus "transformation initiatives."

As for Telenor, its global workforce shrank by nearly one third last year, to fewer than 21,000 employees, as it dispensed with assets and continued to invest in automation. The sale of telecom operations in central and eastern Europe, and divestment of a banking platform in Pakistan, means nearly 8,000 members of staff would simply have found themselves working for a different employer -- at least initially.

But roughly 2,000 of Telenor's job cuts were linked to process automation and the shift to more "digital" sales channels and systems, under plans that were first announced during an earnings update for the fourth quarter of 2017. Telenor has indicated that efforts to boost profitability will claim 2,000 jobs annually "toward 2020." A planned merger of Asian operations with Malaysia's Axiata could lead to further redundancies as duplicate roles are stripped out.

While the overarching trend is for staff cuts, several operators gained employees in 2018 because of takeover activity and other business initiatives. VEON, an emerging-markets operator generating the bulk of its sales in Russia, grew by nearly 6,200 employees after it absorbed retail assets that were previously part of its Euroset joint venture with MegaFon, another Russian operator. Despite the recent growth, it remains about 6,200 employees lighter than in 2015, with overall headcount at 46,132 in December 2018.

UK telecom incumbent BT, one of Europe's most overstaffed operators, recorded net growth of nearly 1,000 employees last year, despite ongoing efforts to cut 13,000 back-office and mid-level management jobs. As it trims those parts of its workforce, BT has been recruiting the engineers and technicians it needs for the deployment of new fiber-optic and 5G networks.

Canada's "big three" all recorded growth in headcount, too. While none explained the increase in their financial statements, Ibrahim Gedeon, the chief technology officer of Telus, has previously complained that introducing new technologies has forced him to maintain a larger operations team than he would like. 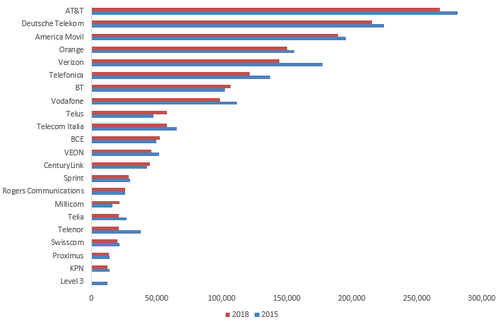 Source: Companies, regulatory filings. Note: Including Level 3, which merged with CenturyLink at the end of 2017, the chart shows 22 companies.

Similar developments have led to a sharp increase in IT costs at Three, a mobile operator in the UK. Although it is not an operator featured in Light Reading's survey, Three has had to maintain its legacy IT systems until every customer has been moved across to newer platforms. Ultimately, however, Three expects the overhaul to claim between 700 and 800 jobs -- accounting for two thirds of all staff in its technology and operations departments.

Threes update, which came a few weeks ago, is proof that automation's impact will not be restricted to customer service departments, where the introduction of "chatbots" like TOBi has already claimed jobs. It also points to the influence of the Internet giants on telco operations: Three's planned cuts are partly explained by a tie-up with Microsoft Azure, which is to host IT systems previously managed in-house.

Freed up or laid off?
On the network side, the threat to jobs now comes from systems that can operate without any need for human intervention. So-called "intent-based networks" are being designed to execute instructions from start to finish, where an engineer would previously have been required throughout parts of the process.

Many telcos have given up suggesting automation will simply "free up" staff for alternative and more interesting roles in the business, an argument that was in vogue several years ago. Senior executives at vendors developing these technologies have also issued warnings about their impact on the workforce. During an interview about intent-based networks in April last year, Jeffrey Gao, then president of Huawei's router business, told Light Reading: "Our target is to use just one tenth of the current people to manage the network in the next three to five years." Kireeti Kompella, the chief technology officer of engineering for Juniper Networks, also thinks technology teams will shrink as intent-based networks are deployed. 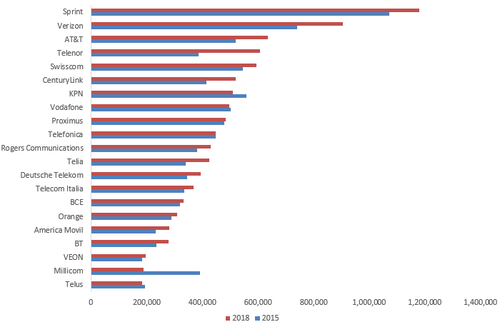 Source: Companies, regulatory filings. Note: Figures are skewed heavily in the case of Millicom because of a sharp fall in revenues between 2015 and 2016 linked to the discontinuation of some business activities.

For some of the world's biggest telcos, staff cuts have led to substantial efficiency improvements, which should eventually buoy profitability in a weak environment for sales growth. Verizon's revenues per employee soared from about $741,000 in 2015 to $906,000 last year, despite a flattish sales performance. Using today's exchange rate, Telecom Italia's increased from $337,000 to $368,000 over the same period. As telcos are increasingly assessed alongside highly automated web giants, with per-employee revenues of more than $1 million annually, those metrics could assume much greater importance in future.

In the wider economy, jobs data currently points to a boom. Despite concern about artificial intelligence and automation, work is plentiful and conditions are improving, according to a recent leader in the Economist magazine that cites reliable data about employment statistics. For telco workers losing their jobs, there may be some comfort in knowing that opportunities exist in other sectors -- whatever those may be.

In preparing this story, Light Reading examined annual and quarterly reports, as well as filings with the US Securities and Exchange Commission, for the 20 largest telcos by revenues with headquarters in North America or western Europe (including Canada, Mexico and the US). Sprint, a US operator that is now a subsidiary of Japan's SoftBank, was added to that list for a more complete picture of the US market.

While the other 20 companies are active largely in Europe and North America, a number have operations in other parts of the world. UK-based Vodafone has businesses in Africa and India, for example, while Mexico's América Móvil runs networks across South America.

For most operators, the fiscal year mirrors the calendar year, although in some cases it ends in March. A year ending in March 2019 has been considered alongside 2018 data from other companies for the purposes of this article.

Wherever possible, fiscal year-end employee figures have been used. If these were unavailable, year-average numbers were analyzed instead.

All currency conversions have been carried out at rates on June 5, 2019.

To access a read-only Excel file including all the data that was compiled and generated during the preparation of this story, click here.