So Much for the Diet: Huawei Gained 8K Workers Last Year, Report Shows

To anyone on the tradeshow circuit, Huawei's heft is most visible in the entourage that surrounds its notables. Some employees seem to have little purpose other than to hold open doors, applaud when a rotating chairman bashes the US or simply congregate in shoals, proving to anyone else who floats past that Huawei is really big.

This was expected to change in the last couple of years after Eric Xu, one of the rotating types, complained in a 2017 New Year message that operating efficiency and cash flow were not improving. Remedial action was needed, he said, such as cutting down on "empty and extravagant marketing events and conferences." 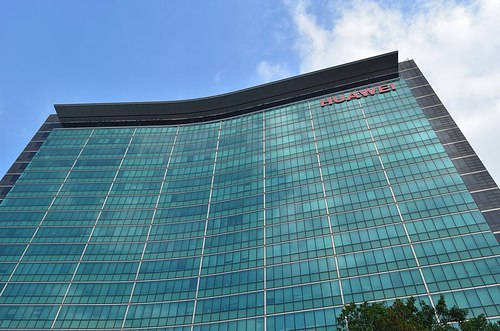 More recently, Ren Zhengfei, Huawei's founder and non-rotating boss, has talked about dumping "mediocre" employees if the US anti-Huawei campaign results in a loss of business.

But like so many other diet plans conceived at New Year, Huawei's does not appear to have had the desired effect. Rather than trimming headcount, Huawei has bulked up, according to its just-published annual report. Having cited roughly 180,000 employees in its 2017 annual report, it says there were about 188,000 on its books last year. That's an increase of about 4.5% in staff numbers.

Huawei neither acknowledges nor explains the increase in its annual report. The figure is simply presented without any other point of comparison, and only by referring to the 2017 report can you see the change. Nor is there a breakdown to indicate where staff are based or what they do.

But the increase came while Ericsson and Nokia, Huawei's two big western rivals, were making or planning substantial cuts. Ericsson finished 2018 with exactly 95,359 employees, according to its earnings report for the final quarter, having shed 16,105 members of staff in the previous two years, including around 8,000 at its managed services unit. Peter Laurin, the head of that business, has blamed recent investments in artificial intelligence (AI) for many of the layoffs: With a new AI-powered operations engine, Ericsson needs fewer staff to support customers.

Rather like Huawei, Nokia has become more bloated in the last couple of years, according to financial statements. Having employed an average of 101,000 employees in 2016, when it bought equipment rival Alcatel-Lucent, it was up to 103,000 last year, its latest filing with the US Securities and Exchange Commission shows. But cuts are on the cards. Last November, Nokia said it would aim to slash annual operating costs by 500 million ($562 million) in the next two years through staff cuts and by reducing overheads. Since then, it has announced layoffs in several European countries. 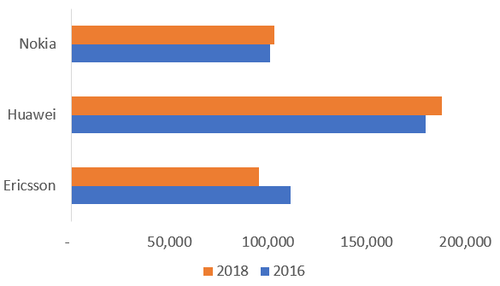 Notwithstanding the US campaign against it, Huawei's networks business has recently been under the same kind of market pressure felt by Ericsson and Nokia. Its reported revenues fell 1.3% last year, while Nokia's declined 3% and Ericsson's grew 3% (partly because of favorable currency movements).

Thanks to its fast-growing enterprise and device units, however, Huawei managed a 20% increase in overall sales last year, and 25% growth in net income. Unlike its competitors, it has not been struggling with profitability, either. Last year, its operating margin came in at 10.2%. Ericsson managed just 0.6%, while Nokia, with its small operating loss, registered -0.3%. 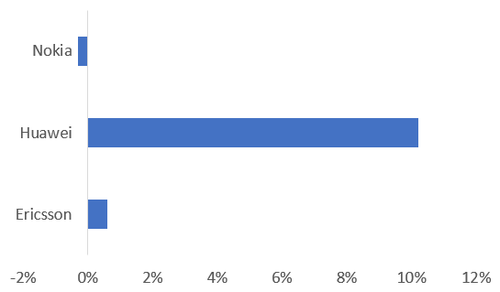 Slashing headcount could be a dangerous move by Huawei amid the current uncertainty. Its reputation rests on its R&D muscle and responsiveness to customer demands. Signs it is cutting back could alarm those service providers who say Huawei's resources are one of its biggest advantages over Ericsson and Nokia.

Circumstances may also have conspired against Huawei's efforts to lose weight. Admittedly worried that US authorities could block access to important components -- a move taken last year against ZTE, a smaller Chinese vendor -- Huawei has been stockpiling equipment. Inventories and other contract costs were accordingly up one third last year, to about RMB97 billion ($14.5 billion). "Cost includes expenditures incurred in acquiring the inventories and bringing them to their present location and condition," said Huawei in its annual report.

Even so, these must be nervy times for "mediocre" employees. Ren's comments about axing staff came in January, as US enemies launched a full assault on Huawei, and several analysts reckon the US campaign will result in a loss of 5G market share for the company. Eric Xu's New Year resolution in 2017 may have been somewhat half-hearted. The founder's message this year is likely to carry more purpose.