Facebook has renewed its commitment to recruit another 500 employees at its UK business by the end of the year despite the increasingly tough talk from the British government about reducing immigration following an exit from the European Union.

The social networking giant had about 1,000 employees in the UK at the start of 2017 but that number is set to hit around 1,500 by year end, said Facebook executives at a press briefing in London earlier today.

"London is a great hub and it gives us access to all of Europe," said Kyle McGinn, a product director at Facebook. "There is a thriving startup scene which is perfect for us. We've been here about ten years now and we continue to invest and are committed to the location."

The UK facilities represent Facebook's biggest engineering investment outside the US, with UK-based staff working on some of the company's most eye-catching innovations, including the Oculus virtual reality headset and Aquila, a solar-powered drone designed to provide Internet connectivity in remote communities.

You Mean It's Not Hands-Free? 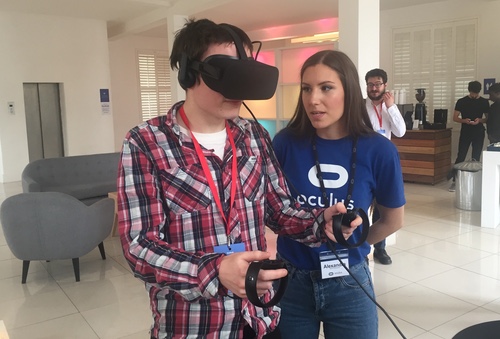 Shedding more light on the engineering work done from the UK, McGinn told reporters that Facebook has about 30 teams spread across seven distinct areas.

Besides Aquila, Oculus and other virtual reality and augmented reality projects, Facebook's UK business has invested heavily in what it calls a "protect and care" initiative, which appears to cover everything from addressing password issues for the users and communities on its platform to figuring out next steps should a Facebook member post messages about committing suicide.

The new recruits should help Facebook to beef up its expertise in some of those areas as it continues to grow, but they could also be assigned to fresh initiatives the company has yet to announce.

"We always move into new areas when we find people who can do the work," said Bryan O'Sullivan, an engineering director at Facebook, on the sidelines of the event. "We are opportunistic, and when we find expertise we invest."

Facebook also clearly attaches considerable value to its relationships with academic institutions in the UK like University College London and Imperial College. Those tie-ups appear to have spurred some of the "open source" work that Facebook has done with technology giants such as Google (Nasdaq: GOOG), Microsoft Corp. (Nasdaq: MSFT) and Amazon.com Inc. (Nasdaq: AMZN).

"We've done specialized work and then open sourced that to the rest of the industry," O'Sullivan told reporters. "London is a great hub to be doing this sort of work in because of the skillsets we can access."

The remarks will be welcomed by UK authorities keen to show that multinational firms are still investing in the UK despite its decision to leave the EU.

In the aftermath of the UK's "Brexit" referendum in June 2016 -- during which a slim majority of voters opted to quit the EU -- companies including mobile operator Vodafone Group plc (NYSE: VOD) threatened to move their headquarters from the UK to Europe if the decision meant being locked out of Europe's single market. (See What Hard Brexit Means for Vodafone, BT.)

The Conservative government has taken flak for its hardline stance on Brexit, with critics arguing that tough immigration controls will have dire consequences for the UK economy.

Hoping to silence her critics, and secure a bigger share of parliamentary seats, Prime Minister Theresa May has called a general election for June 8.

Most UK pollsters expect the Conservatives to win that election comfortably.