But some telecom operators at the event weren't reading from the same cheery script. Just a few minutes into a subsequent panel debate about collaboration, Elisabetta Romano, the chief technology officer of Telecom Italia, was launching into a tirade against her suppliers. "We firmly need vendors to step up in order for us to be able to give to our friends what they need," she said, effectively arguing that without the right technology operators cannot meet the emerging demands of business customers. If the organizer's messages were all about digital progress and collaboration, Romano's remarks served as an abrupt reminder of the gulf between operators and vendors that continues to yawn. 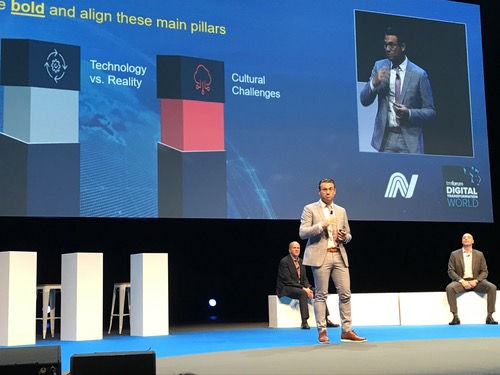 As far she is concerned, the recent optimism about the emergence of cloud-native technology is ill-founded. "We are talking about adding software and core at the edge and we need to have orchestration. We have plenty of orchestration but not yet the right one and that is something vendors need to work on. We are talking about cloud-native and guess what? Vendors are not yet delivering cloud-native software for us. Time is running out." It was a no-nonsense call to action for Telecom Italia's vendors, which on the orchestration side include Cisco, Ericsson and Netcracker.

At least one business at this week's event sounds tired of the discord this situation has produced. Vesa Jutila, the co-founder and chief operating officer of Hatch, a part of Finnish gaming company Rovio, told operators -- from behind the safety of his on-stage plinth -- that he is sick of the fragmentation. "You all have a different type of billing integration and way to offer mobile edge access and it is impossible for a small company," he said. "There needs to be more flexibility otherwise we go somewhere else."

Yikes. Given the suggestion that an important gaming company could take its business to a provider that is not from a traditional telco background, it is no wonder Romano sounds worried. And she is not the only one. "Now you understand the problem," Nikos Katinakis, the head of networks and IT for Australia's Telstra, told the audience in response to Jutila's remarks. "They are stuck with what they are getting, and we are stuck with what we are giving."

Vendors are always the scapegoat, of course. They would probably say it's not always clear what operators want from them, said Mark Newman, the TM Forum's chief analyst. And the constant complaint that traditional vendors just do not measure up does sometimes appear unfair. After all, when Japanese ecommerce player Rakuten set out to build what it claims is the world's first genuinely cloud-native mobile network, it chose Netcracker, one of the big guns in the B/OSS (business and operational support systems) market, as its supplier -- and not some radical, unheard-of alternative.

"Netcracker didn't have all the right technology but was committed to work on massive internal changes to achieve results," said Tareq Amin, the chief technology officer of Rakuten Mobile, and the industry's poster boy for cloud-native technology, during a closed-door session later in the day (more on that in a subsequent story). Netcracker executives might have preferred lavish praise for their technology as well, but they looked as chuffed as a prize-winning schoolboy at Amin's comments about their adaptability.

Sometimes it is hard not to feel that time is running short for this industry. The rollout of 5G networks will cost four times as much as building 4G networks, according to Angus Ward, the CEO of digital platform solutions for BearingPoint, a management and consulting firm and technology vendor with headquarters in the Netherlands. Operators that cannot make the transition from selling pure connectivity to offering more value-added services may be heading for a "car crash," he says.

The warning signs are increasingly apparent. Facing a costly 5G buildout across European and international markets, Vodafone earlier today slashed its dividends after agreeing to splurge billions on spectrum licenses in Germany and Italy. The UK's BT is doing a bad job of cutting its headcount as it prepares for a similarly expensive deployment of fiber and 5G networks in the UK. Industry figures gathered in Nice have the same gripes year after year. Perhaps Rakuten's innovation, and all the interest it has generated, can spur change. But Rakuten is obviously unencumbered by legacy. And until its service is launched in October, it is like a keenly anticipated movie yet to prove its blockbuster credentials.

Next year, the TM Forum is abandoning the sun-kissed French Riviera for the Nordic charms of Copenhagen. At least something is guaranteed to be different.

harryrolton7 3/19/2020 | 5:16:12 AM
Re: takes time for Core Software to be cloud native and to be mainstream. nice to see this type of posts share more like this and i am sharing to check it out
Reply | Post Message | MESSAGES LIST | START A BOARD

susansem 5/15/2019 | 11:30:04 PM
Re: takes time for Core Software to be cloud native and to be mainstream. There are some vendors who do offer cloud-native software in the core but the trust, expertise and ability to offer end to end solutions across the network are lacking.  Finally, the investments required to change over 3-5 years need to be justified with a biz case and the lack of clarity with 5G is hurting it.
Reply | Post Message | MESSAGES LIST | START A BOARD

komatineni 5/15/2019 | 8:20:06 PM
takes time for Core Software to be cloud native and to be mainstream. It's rather easier to blame each other but it's all about money and business case. Operators want 'cheap' so to justify the transition or business case while vendors and current technology doesn't match the needs. Added to the skill set issues, architectural limitations, and regulatory needs make it too complex to adopt in core domains. In non-core (be it IT or support systems) it is rather easier to move. Or big guys with other businesses could lead like Rakuten.

But with hundreds of Gbps or close to Tbps traffic in a centralized location making the move to cloud yet meeting the regulatory requirements, changing the mindset from pets to cattle take some time. Distributing to the edge was a good idea and will happen but the current infrastructure (be it infra or fibre or IX peering/transit points) makes it very confusing to the majority of the emerging markets.

There are some vendors who do offer cloud-native software in the core but the trust, expertise and ability to offer end to end solutions across the network are lacking.