Tracking Deutsche Telekom's progress toward this target is not easy. Except in its capital market day presentations, the company does not include a figure for total operating costs in its financial statements, let alone provide any indication of direct and indirect costs. Yet by deducting adjusted EBITDA (earnings before interest, tax, depreciation and amortization) from revenues, one can arrive at a ballpark figure for operating costs (this same calculation was used to roughly gauge GHS costs as a proportion of the total, as discussed earlier). 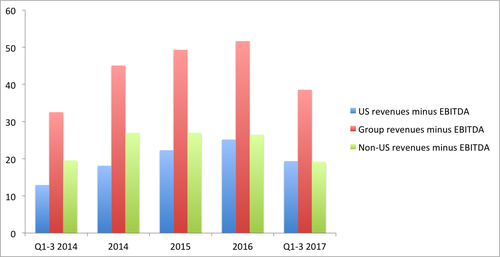 At about 27 billion ($31.2 billion) in 2014, this revenues-minus-EBITDA figure is somewhat lower than the 29.7 billion ($35.2 billion) that Deutsche Telekom generated in non-US operating costs that year, according to its February 2015 presentation. The capitalization of some costs, which entails moving them on to the balance sheet, could explain some of the difference.

Presented with details of Light Reading's calculations, Deutsche Telekom did not dispute the methodology and numbers but did feel the comparisons over the first nine months of the year were not strictly fair. "We've been talking about annual figures," said the operator's spokesperson. It was then he acknowledged that divisions besides GHS are lagging on cost-cutting activities.

For investors, there may be cause for optimism. While operating costs might not have fallen much in the last few years, staff numbers including the US business are down 5% since 2014, from nearly 228,000 that year to around 216,500 in September. Most of those cuts seem to have happened since the beginning of 2016, which could explain some of the recent spending on "transformation." As automation allows Deutsche Telekom to continue pruning its workforce, it may incur further one-off costs. But it should eventually be left with a much sleeker business. (See Efficiency Drive by Major Telcos Has Claimed 74K Jobs Since 2015.)

Unsurprisingly, Deutsche Telekom has been rather coy when asked what impact automation could have on its headcount. But it has only recently said that "brutal automation" will be needed as it develops a "zero touch" network it can operate with minimal human intervention. And it will be remarkable if pan-net does not lead to further job cuts in the next few years. While that is a major worry for employees throughout the Deutsche Telekom organization, any prospect of juicier profit margins should bring a smile to investors' faces. (See 'Brutal' Automation & the Looming Workforce Cull and DT: Brutal Automation Is Only Way to Succeed.)