Fiber network overbuilds and expansions have not yet lost their luster even as the pace of those builds slow a bit in 2022. But a top industry analyst warns that the future isn't looking quite as bright due to an emerging set of economic challenges that could cut down the overall rate of return on those buildouts.

While there's no question that the rate of fiber deployment has accelerated, "[r]ising costs, reflecting labor cost inflation, equipment cost inflation, and higher cost of capital, all point to diminished investment returns for fiber overbuilds," Craig Moffett, analyst with MoffettNathanson (a unit of SVB Securities), warned in his Q3 2022 synopsis (registration required) of the US broadband sector. "Those returns will only weaken further as buildouts are necessarily pushed out to less attractive, lower density, markets."

If, as Moffett suspects, the investment returns for fiber overbuilds prove to be "inadequate," it follows that capital markets will eventually pull back funding. "Indeed, this is how all bubbles ultimately pop," he added.

Moffett doesn't expect a near-term pull back on fiber overbuilds, but he notes that there are already signs that the pace of deployments has slowed among certain operators.

As recent as its Q3 2022 earnings call, AT&T has reiterated that it's on track to expand its fiber footprint to more than 30 million locations by 2025. The company deployed fiber to about 2.3 million locations through the third quarter of this year, but appears hard-pressed to meet its guidance to build 3.5 million to 4 million fiber locations per year.

Given that the fourth quarter is typically a slow construction period, AT&T "looks to be well behind its deployment goals," Moffett wrote. "If the company retains the pace of deployment in Q3, they will end the year 675K homes short of their goal, or an 18% shortfall compared to the midpoint of their target."

But AT&T isn't alone. Lumen has also fallen behind its target, as has TDS and altafiber (formerly Cincinnati Bell) and Altice USA. Those on track or ahead of pace include Frontier Communications, Consolidated Communications and Verizon. 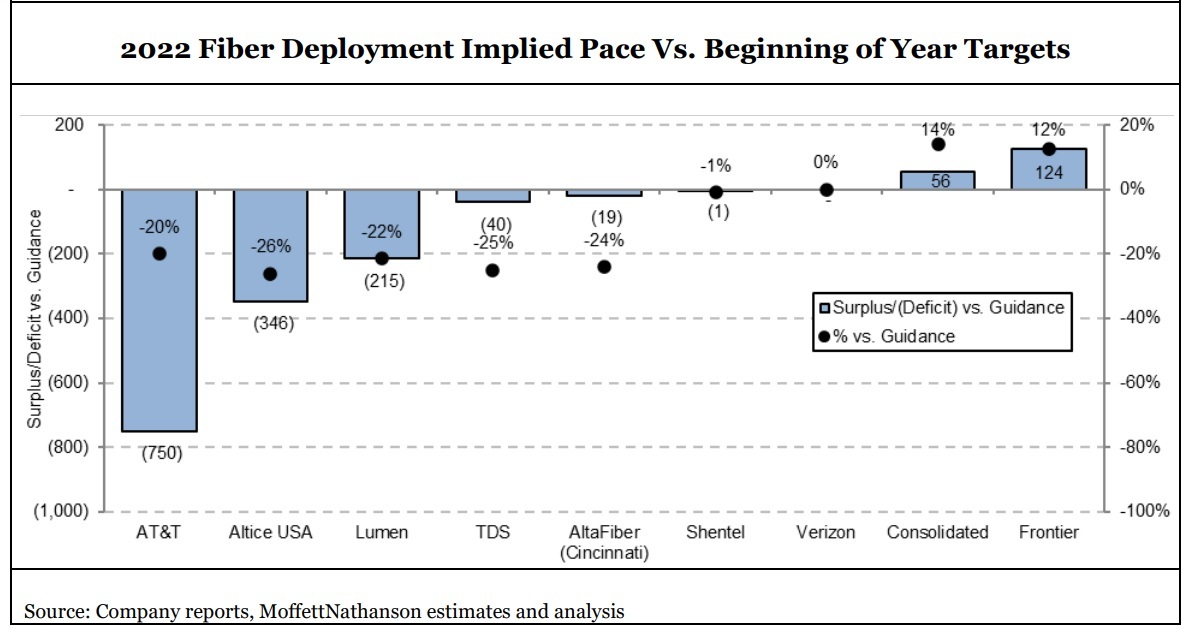 Other industry watchers are also focused on this trend. The analysts at Wells Fargo recently lowered their fiber buildout forecasts for 2022 and 2023. They cut their 2022 forecast for the US to about 8 million new fiber locations, down from 9 million. For 2023, they expect the industry to build about 10 million locations, cut from a previous expectation of 11 million.

Multiple factors slowing down the pace

Though overall buildout figures are still relatively high, some operators recently have blamed a blend of reasons for the recent slowdown in pace, including a challenging labor supply, permitting delays and rising costs for capital and equipment.

And, like the pace of buildouts, the cost situation is clearly not the same for all operators. While Consolidated is seeing the cost per home passed rising to a range of $600 to $650 (up from $550 to $600), Frontier expects its costs to remain at the expected range of $900 to $1,000.

But more generally, Moffett believes the returns on those investments "will only weaken further as buildouts are necessarily pushed out to less attractive, lower density, markets."

One takeaway from that, he warns, is that fiber overbuilding is poised not only to generate lower returns that originally hoped, but that there also will be upward, not downward, pressure on broadband prices.

Back to the pace of buildout, there's heavy demand for labor for today's overbuilding plans, and it will only get heavier as the $42.5 billion Broadband Equity, Access and Deployment (BEAD) program gets rolling.

Remedies are out there, with Moffett pointing to the Fiber Broadband Association's rollout of its OpTICs Path fiber technician training program earlier this year as one example. ATX Networks, a network tech supplier, is chipping in with the recent launch of a Field Personnel Replenishment Program.

But they might not completely bridge the gap. "These efforts may help expand capacity, but they are unlikely to fully meet demand, and they are almost certainly not going to forestall near-term labor cost inflation, in our view," Moffett wrote.

With rising equipment costs and the cost of capital also factoring in, Moffett views a 20% rise in fiber deployment (for both passing and connecting homes) a "reasonable range" in the coming two to three years.

Tied in, Moffett wonders if operators will be forced to raise prices to help restore returns to the levels anticipated when fiber buildout plans were first conceived. While it's unclear if competitive dynamics will allow for that, "it does appear to us that expectations of falling ARPU [average revenue per user] are misplaced," Moffett wrote.

But the mix of higher cost of capital and deployment for fiber projects, paired with deployment in lower density markets or those with more buried infrastructure, stand to reduce the value of such fiber projects further.

"Capital markets will sniff out this dynamic long before the companies themselves do, and they will withdraw capital. This is, of course, how bubbles are popped," Moffett warned.

FWA leads the way in Q3

US cable turned in a modest gain of 38,000 broadband subs in Q3 2022, an improvement from cable's first-ever negative result in Q2. Cable saw broadband subscriber growth of 1.2% in Q3, down from +4.4% in the year-ago quarter.

Meanwhile, fixed wireless additions set a new record thanks to continued growth at both Verizon and T-Mobile. However, T-Mobile's 5G Home business posted 578,000 FWA subscriber adds in Q3, up just 3.2% from the prior quarter.