AT&T's consumer and business wireline units are on two tracks. The consumer side is being aided by an aggressive fiber buildout to help wipe out most legacy losses. But the business wireline side of the house, also saddled by legacy services and technologies, is requiring more drastic action as AT&T looks to "reposition" those assets.

Starting with the consumer wireline side, AT&T added 316,000 fiber subs in the second quarter of 2022, improving on year-ago adds of 246,000 and extending its grand fiber total to 6.59 million. AT&T said this marked the tenth straight quarter with more than 200,000 fiber net adds.

AT&T ended the quarter with 37% subscriber penetration in its fiber markets. 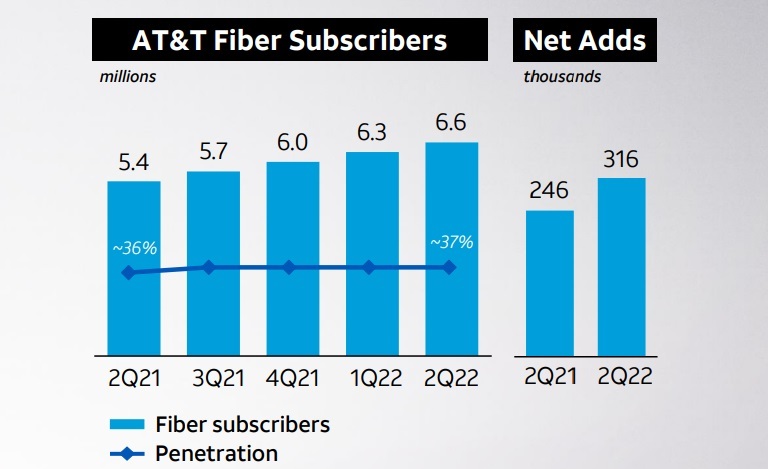 Together, AT&T lost 25,000 total broadband subs in the quarter, versus a year-ago gain of 51,000. Those total quarterly losses rose to 43,000 when DSL losses were included, compared to a gain of 28,000 in the year-ago quarter. Analysts were expecting AT&T to post a net subscriber gain of about 20,000.

But AT&T's aggressive fiber buildout, which included 1 million new fiber locations in Q2 for a total of 18 million, have boosted AT&T's average revenue per unit (ARPU). Fiber ARPU rose to $61.65, fueling a higher blended ARPU (fiber and non-fiber) of $57.64.

While fiber continues to aid the cause for AT&T's consumer wireline business, the future of AT&T's business wireline unit is in a state of flux. Revenues shrink as the company puts a stopper on certain legacy voice and data services, including VPN services, and faces a reallocation of government spending away from some of those services.

As such, AT&T is pressing ahead with a plan to "reposition the asset," AT&T CEO John Stankey said on Thursday's earnings call. "This business is increasingly facing secular pressures as customers replace traditional voice services with mobile and other collaboration solutions."

That pressure is sizable given that the company estimates that about half of its segment revenue is derived from these legacy voice and data services. And the pressure is showing in the numbers, with business wireline revenues dipping to $5.6 billion, down 7.6% year-over-year. 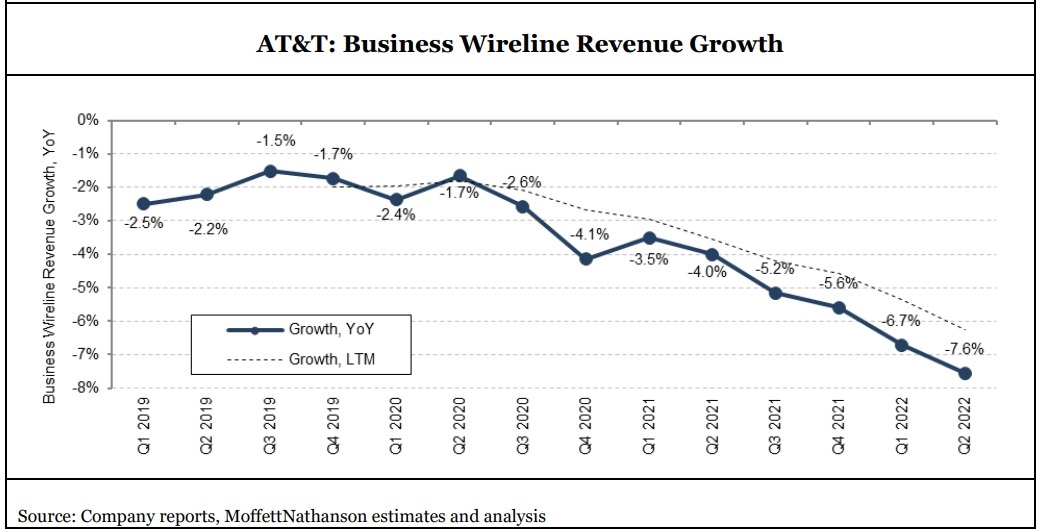 Chart used with permission.
Click here for a larger version of this image.

"In short, Business Wireline is a problem. And it's not getting better," Craig Moffett, analyst with MoffettNathanson, summed up in a research note (registration required).

AT&T, which expects this repositioning to take multiple quarters, intends to counter the issue in part by backing away from some low-margin products, shift customers to AT&T's owned-and-operated infrastructure, take advantage of its fiber network buildout (helpful when pursuing an underpenetrated small- and medium business segment) and pursue more business-focused mobility deals.

"We know this transformation won't happen overnight, but similar to our turnarounds in mobility and consumer wireline, we're confident we have the right strategy in place," Stankey said.