Frontier Communication's fiber story flipped ahead another page in the third quarter, as the company added record fiber subscribers and stayed on track to hit its big fiber buildout targets.

Frontier added a record 64,000 fiber subscribers, beating the 57,000 expected by analysts. That helped to offset greater than expected copper subscriber losses of -58,000. 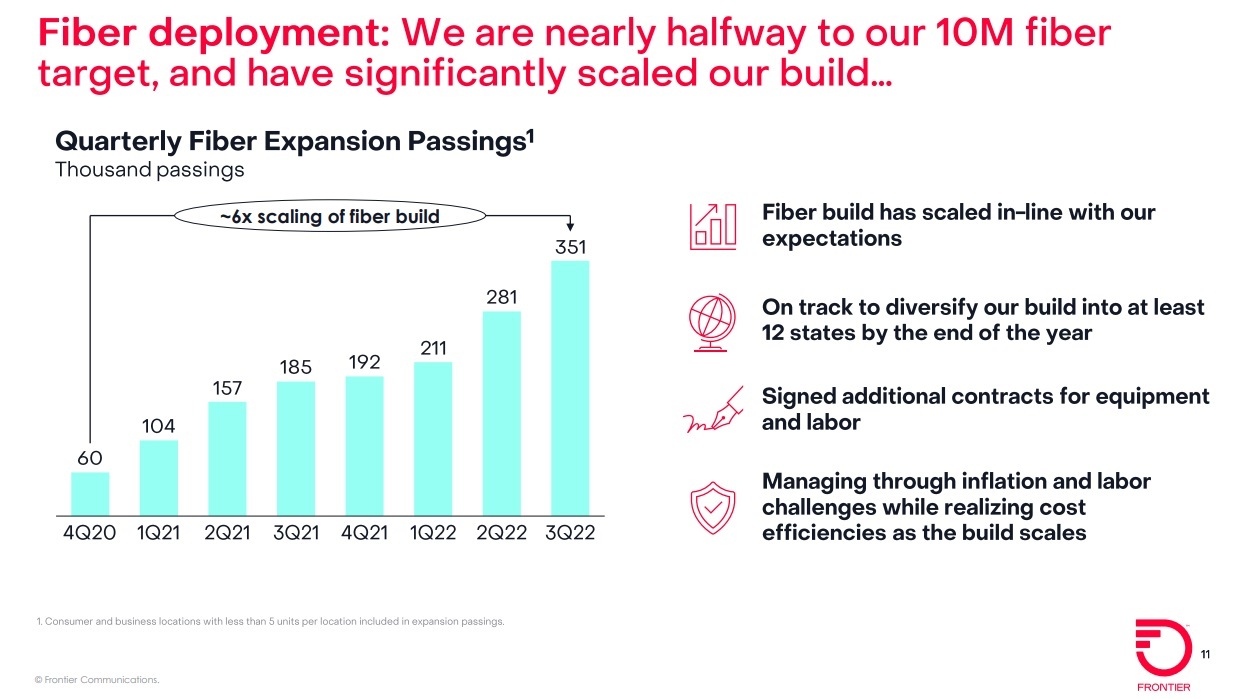 Despite seeing "moderate inflation," Frontier expects the cost per home passed for fiber to remain in the range of $900 to $1,000, company CFO Scott Beasley said Wednesday on Frontier's Q3 earnings call.

In Frontier's "base" fiber footprint of 3.2 million homes (in more mature areas where fiber's been available for several years), penetration rose 30 basis points in Q3 to 42.9%. "When we look at the growth over the past year, we see a clear path to achieving our long term target of 45% penetration in our base markets," Frontier CEO Nick Jeffery said.

Fiber ARPU (average revenue per user) was up 2.6% year-over-year, but came a little short of expectations thanks in part to gift card promotions. Frontier's consumer fiber ARPU, at $62.97, missed New Street Research's expectation of $63.67 and a consensus estimate of $64.51. Copper ARPU, however, beat estimates: $49.65 versus an expected $48.57.

On pricing and the potential for MVNO partnerships

Frontier currently has no plans to raise prices due to inflation and other economic pressures, but the company left the door open to such a move.

"We'll be a rational pricing actor in this market," Jeffery said. "If those [inflationary pressures] don't moderate, then of course we maybe consider pricing actions to compensate...just as we're seeing others doing."

Frontier also has no immediate plans to strike an MVNO deal that would enable it to use mobile in a bundle to help gain and retain broadband subscribers – a playbook already in use by Comcast, Charter Communications, WideOpenWest and Altice USA.

As churn rates remain stable and low, Jeffery explained, "the argument for using some of that scarce capital to divert into an MVNO to solve a problem that we don't yet have, I think, would probably not make our shareholders super happy."

But Frontier has experience in the mobile arena from execs who previously hailed from Vodafone, Verizon and AT&T.

"We're watching it very closely and if consumer behavior changes or if the market changes in a material way that impacts us such that moving some of our scarce capital to build or partner with an MVNO would be a smart thing to do, we'll do it and we'll do it very quickly," Jeffery said. "But now isn't the moment for us."

Frontier ended the quarter with $3.3 billion of liquidity to fund its fiber build. Beasley said Frontier has additional options if needed, including taking on more debt, selling non-core real estate assets, access to government subsidies and the benefits of a cost-savings plan that has exceeded the target (from an original $250 million to $400 million).