Today's booming $8B fiber access market is under attack

If 5G mobile is the part of telecom that still consumes much of the industry and political attention, the smart money is on fiber.

Nokia, a bellwether, reported stable sales at its mobile business for the recent first quarter but a 37% year-on-year boom in fixed. Global market revenues from passive optical network (PON) equipment exceeded $8 billion last year, according to Omdia (a market researcher and sister company to Light Reading). In 2027, they will be nudging $16 billion, it predicts.

Investor and government enthusiasm for digging up streets and laying cable explains why companies are piling into a sector that has been dominated until now by just a handful of mainly Chinese suppliers. Last year, Huawei, ZTE and Fiberhome claimed a 64% share of the market for optical line terminals (OLTs), the boxes that sit at the telco end of the fiber line. With nearly a quarter of OLT revenues, Nokia was the only big Western provider. But all these companies are suddenly under attack. 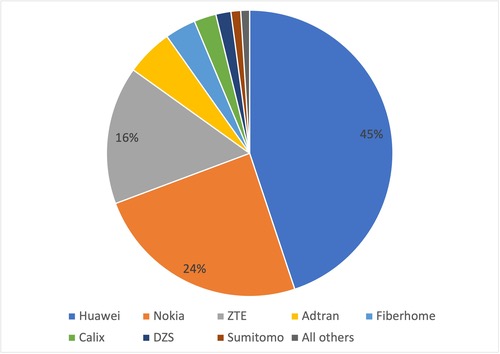 Opportunity for others stems partly from the backlash against Chinese vendors in much of the world. A UK ban on the purchase of fiber products from Huawei and ZTE has been a blessing for Adtran, a fast-growing US maker of broadband equipment. For the first quarter, Adtran's revenues were up 17%, to nearly $155 million, after market share gains in 2021. Ronan Kelly, Adtran's chief technology officer for the EMEA region, says the clampdown in the UK and other European markets has helped to level a playing field skewed by anticompetitive practices.

"We have seen over the last two decades fantastic inroads achieved by vendors coming out of China – not just Huawei, there are others as well – but thankfully we've also seen the European Union get involved around dumping on the markets, and stuff like that," he said on a recent Telecoms.com podcast. "In the long term, I don't think it serves anybody well to have innovation squeezed out of the industry  When you are playing against a loaded deck, it can be very difficult to sustain yourself."

But the fiber market is also attracting interest from companies that have not previously made broadband access equipment. In the vanguard of that movement is Ciena, a US firm best known as a manufacturer of optical equipment used outside the access network. Michael Genovese, an analyst with Rosenblatt Securities, says it is now a "meaningful player" in a part of the PON market he values at $3 billion.

Indeed, Ciena has already been able to land a contract with AT&T, one of the biggest US operators, for the supply of OLTs based on XGS-PON, a higher-speed successor to the GPON standard widely used today, according to Genovese. AT&T plans to extend fiber to between 3 and 4 million homes by 2025, he says, and has previously relied heavily on Nokia for its OLT equipment. Genovese estimates the AT&T deal alone may account for 2% of Ciena's revenues next year.

India's STL, formerly known as Sterlite, is another player moving from other parts of the optical equipment sector into OLTs for broadband access. It has already developed an offer that uses a "pluggable" OLT product made by Tibit, a partner based in California, notes Julie Kunstler, a principal consultant with Omdia. With that, STL can run its PON software on white-box equipment, appealing to operators that have prioritized disaggregation and openness, said Kunstler in a recent report.

"The hardware will be off the shelf and then all the value will be lying in the software," said Ankit Agarwal, STL's managing director, likening this disaggregation trend to the one happening in the radio access network. "There are benefits regarding scalability, telemetry and quality-of-experience applications. All of this can reduce cost of ownership, essentially, and be run on cloud-native platforms to provide a 10-gig service."

Should the incumbents be worried? Gains by smaller players and new entrants have come largely at the expense of Chinese vendors so far, with Nokia increasing its market share last year, according to Omdia's figures. But even Huawei's OLT revenues grew in 2021, those figures show, as operators in China – and smaller countries still friendly toward Chinese vendors – continued pouring money into fiber rollout. The old Chinese adage that a rising tide lifts all boats seems to apply.

"In Europe, one of the things that you must notice is the penetration of fiber is so low," said Federico Guillen, the head of Nokia's networks business, during an interview with Light Reading earlier this year. "Italy, the UK, France, Germany, Belgium, the Netherlands – all of them are massively deploying fiber now. Even the cable operators are starting to go to FTTH [fiber-to-the-home] because DOCSIS [a cable standard] has limitations."

Yet despite the market outlook, investors remain glum-faced about most of these companies. The share price of Nokia, which derives only about 13% of its sales from fixed access, has lost a fifth of its value since the start of the year, while Adtran's has fallen 21%. Ciena is down 43% over the same period. STL's share price has halved.

Sales are rising, but not by enough – in many cases – to offset a big increase in costs. Adtran recorded a $1.1 million loss for the first quarter after its cost of goods sold rose 25%, to $100.2 million. The figure was up 30% at Ciena over this period, to about $547 million. After spending heavily on research and development, as well, it reported a 62% drop in net income, to about $39 million.

Share-price movements since the start of 2021 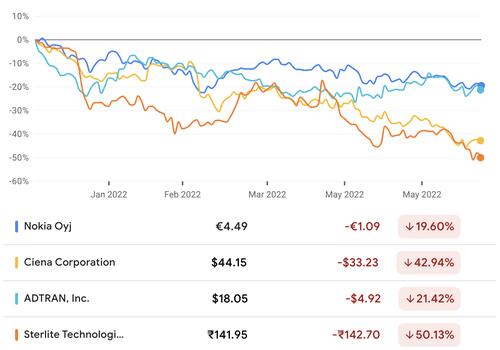 The shortage of semiconductors and other components needed for optical equipment has driven up costs as China continues to fight COVID-19 through lockdowns. "A number of key optical subcomponents suppliers, as they themselves have publicly noted, have been unable to fulfil their supply commitments due to constrained access to semiconductors," said Gary Smith, Ciena's CEO, during a financial update this month. Supply chain conditions "appreciably worsened" during Ciena's recent second quarter, he told analysts.

Without an overhaul of China's zero-COVID strategy, conditions will not improve fast. "While we have, by design, a very low overall supply chain exposure to China, our revenue is being affected given that China is effectively the primary source of many of these low-value commoditized parts," said Smith. "There simply aren't enough parts to go around and satisfy demand across a number of industries and market segments."

Better component availability would buoy sales and lift profit margins, said Tom Stanton, Adtran's CEO, during his own company's last quarterly update. If China remains a headscratcher for many players, international semiconductor firms are currently investing billions of dollars in additional European and US capacity. It has produced some warnings that a components glut could swiftly replace the current shortages. Today's burgeoning community of OLT makers will certainly hope so.