The breakup of Telecom Italia is taking longer than the collapse of the Roman Empire. The ailing phone incumbent now seems to have burned through more turnaround plans and bosses than Boris Johnson has through Cabinet ministers. As Britain's embattled leader finally resigned (sort of), loved only by his grotesque menagerie of loyalists plus Dilyn the Downing Street dog, Telecom Italia was presenting its newest carve-up scheme to investors  like a sick man explaining to family members why his legs need amputating. Asset sales, 9,000 job cuts and plenty of wishful thinking all feature in the story.

Management's basic aim is to separate Telecom Italia's fixed-line network infrastructure (imaginatively called NetCo) from the parts of the company that sell services and deal with customers (ServiceCo). This split would go much further than the "legal separation" in Johnson's country of BT, whose Openreach unit is the rough equivalent of NetCo. Openreach and BT's other units count BT Group as a common parent, but NetCo could end up with entirely new owners.

Telecom Italia's preferred option  described in slides that were published on its website this morning  is to bundle NetCo with Open Fiber, a government-owned wholesale network. If it cannot execute a deal on "attractive terms," and NetCo will be saddled with 11 billion (US$11.2 billion) in debts under Telecom Italia's plan, then it will consider other options, including a sale to private investors.

No other European incumbent is going this far, even if many of them have spun off their mobile towers, but no other European incumbent looks quite as gangrenous as Telecom Italia. Stubbornly resistant to attempts at revival, and stung by competition, it saw revenues (on a constant-currency basis) drop 4.5% in the recent first quarter, to 3.6 billion ($3.7 billion), and recorded a 142 million ($145 million) loss. Its earnings margin (before interest, tax, depreciation and amortization) has shrunk nearly eight percentage points in two years, to 36.1%, despite thousands of layoffs.

It all explains why Telecom Italia  once cited as one of Europe's most valuable stocks  has watched its share price fall 68% in the last five years. Today, it is worth as little as 5.4 billion ($5.5 billion). Even BT, which is hardly in the best of health, can muster a stock market value of 19.1 billion ($19.5 billion). If it were sold for its current market capitalization, Telecom Italia would have to clone itself three times just to pay off its net debt of 22.6 billion ($23.1 billion) at the end of March.

The hope is that separating prized infrastructure assets from other messiness will prompt a revaluation. The appetite for fiber assets in markets such as the UK  where Goldman Sachs has lavished funds on CityFibre, the biggest fiber rival to BT  is certainly encouraging. If glass fiber is anything like copper, it will be in the ground for decades, a reliable source of returns for investors with a long-term mindset. Broadband showed just how important it is to national economic prosperity during the pandemic. And government bonds had, until recently, lost much of their allure following the 2008 financial crash, persuading investors to hunt elsewhere.

Telecom Italia is reportedly seeking a valuation of 25 billion ($25.5 billion) for the ducts, poles and various equipment that would make up NetCo. That seems feasible, but investors really would need to be in it for the long haul. The company's full-fiber network today reaches about a quarter of Italy's population and its core profitability is expected to shrink under Telecom Italia's plan as buildout continues. Core earnings minus capex are forecast to fall to zero by 2025, from about 400 million ($408 million) last year, before rising to 1.9 billion ($1.9 billion) in 2030.

NetCo's prospects, though, will depend largely on the future structure of the Italian market. As a wholesale monopoly, it would presumably be subject to pricing regulation and lack a market incentive to upgrade ageing networks. The reason for the UK's recent surge is the emergence of infrastructure rivals to BT, but Openreach  as the broadband incumbent  is heading for a loss of market share unless all the various "altnet" plans fail. Even Telecom Italia does not position NetCo as a growth story. It puts last year's revenues at 5.3 billion ($5.4 billion) and says they will creep up to 5.4 billion ($5.5 billion) in 2030.

The oddity is that NetCo is probably the most exciting thing about Telecom Italia domestically. Revenues at its large consumer division are expected to sink from 6.8 billion ($6.9 billion) last year to 6.5 billion ($6.6 billion) in 2026. And while profits are predicted to rise, Telecom Italia plans to cut 3,000 of 14,000 "full-time-equivalent" roles at this unit to fatten margins. It gushes in its presentation about the relatively small enterprise unit, guiding for revenues of 5 billion ($5.1 billion) in 2030, up from just 3 billion ($3.1 billion) last year. But this forecast seems based on a lot of wishful thinking about the Internet of Things and lucrative partnerships with Internet giants. 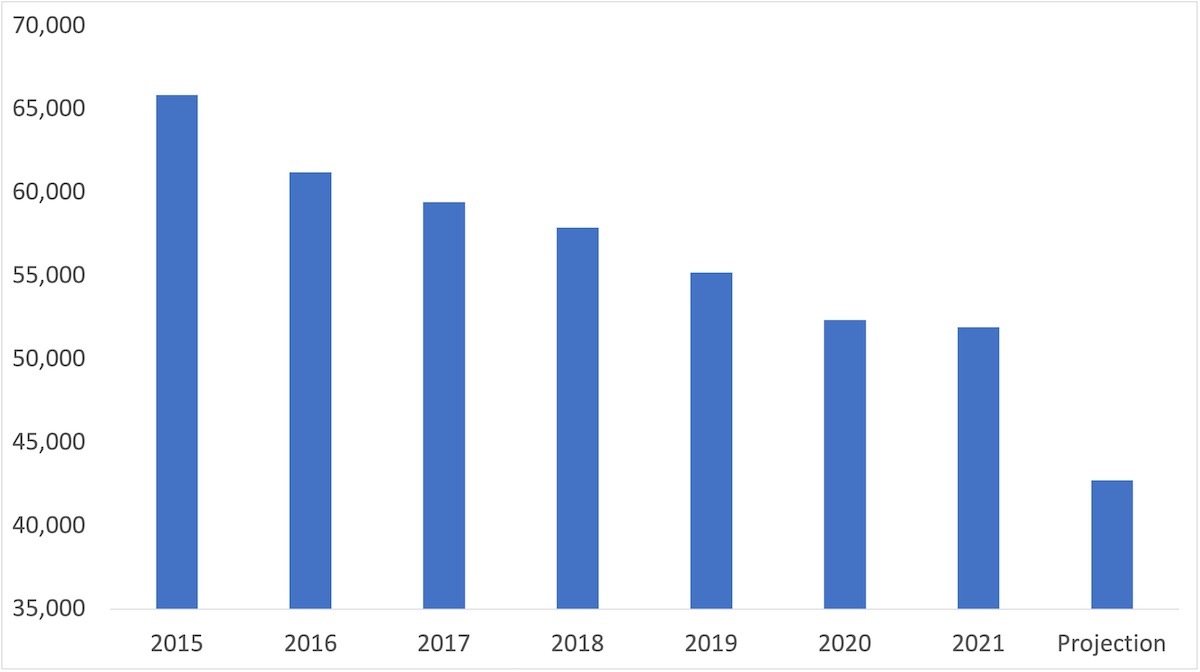 Workers will be horrified if they care to look through the investor presentation. Back in 2015, Telecom Italia employed nearly 66,000 people worldwide, but its headcount had plummeted to just 52,000 employees by the end of last year. Around 21,400 of these people would find themselves working for NetCo and their numbers would dwindle to 15,000 by 2030, under the latest plan. Deduct another 3,000 or so jobs at the consumer business, add 200 that Telecom Italia plans to recruit for enterprise, and staff are looking at a net reduction of 9,200 across the organization.

Squabbling Telecom Italia shareholders (principally Elliott Management and France's Vivendi) have thwarted earlier management efforts at turnaround. CEO Pietro Labriola is the latest in a succession of leaders caught between rival groups. A major difficulty will be settling on a price for NetCo that is to everyone's satisfaction, with Vivendi reportedly valuing it at 31 billion ($31.6 billion). If this real-life soap opera drags on for months yet, nobody will be surprised.