In the aftermath of Brexit, praise for the UK by European organizations has become a rarer commodity. But the country received a "special mention"  and for entirely positive reasons  in the latest update this week by the FTTH Council Europe, a Brussels-headquartered lobby group for the fiber industry. Once the full-fiber laughing stock of Europe, the UK is suddenly the region's dynamo. Since September 2021, when the FTTH Council Europe last published data, fiber networks have passed another 3.5 million homes. Around 10.5 million are now within reach of copper's high-speed successor, reckons the organization.

The residents of some communities are spoilt for broadband choice as investors pile into the market. In the old days of copper, the only big infrastructure alternative to BT, the incumbent, was Virgin Media, a cable company. Most broadband retailers relied heavily on Openreach, BT's fixed-line networks business, to provide services. Now dozens are building their own fiber networks. 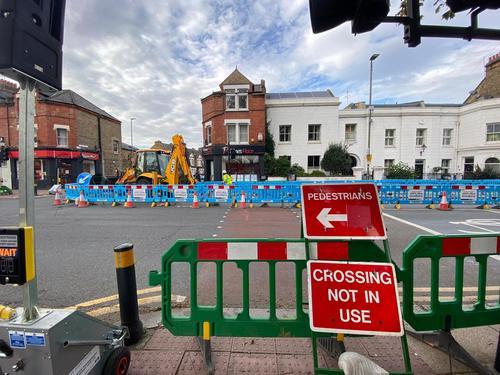 It has sparked talk of a gold rush among the companies that provide broadband equipment, as well as speculation about the future look of the market. Nobody believes most of these fiber investors will survive as independent operators. The uncertainty is over just how much infrastructure-based competition is economically feasible, and what it means for BT.

During the mobile-phone revolution, a worry for all telco incumbents was that consumers would ditch their fixed lines and go mobile only. The impact, of course, was softened considerably by demand for broadband services, which still need those fixed lines. But the likelihood some consumers will switch to new infrastructure players raises the specter of broadband line losses that cannot so easily be stymied.

The danger for BT is that it fails to convert all its broadband connections (both wholesale and retail) to fiber as that technology becomes ubiquitous. Stripping out customers using all-copper services, Openreach supports roughly 18.3 million broadband connections on a "superfast" network that passes about 29 million properties. The take-up rate, in other words, is about 63%, and it has risen sharply from 51% two years ago as consumers have migrated from copper to fiber-based technology.

But the delta between this take-up rate and the full-fiber one is currently enormous. At the end of March, Openreach had fewer than 1.8 million full-fiber connections on a network that passed almost 7.2 million homes, producing a take-up rate in this sector of just 25%. Nor is it rising that fast, having improved from about 20% two years ago.

This does not mean consumers have flocked to other full-fiber infrastructure providers. In September last year, when Openreach supported about 1.3 million full-fiber connections, the FTTH Council Europe reckoned there were just 1.8 million altogether in the UK. Other infrastructure companies, unfortunately, have not been as transparent as Openreach, and Ofcom, the regulator, does not publish equivalent statistics. But if those figures are accurate, Openreach would have a market share of about 72%.

At this stage, likelier explanations for the disappointing rate of full-fiber take-up include consumer apathy, poor marketing and service activation issues (homes passed is not necessarily synonymous with ready for use). Even so, that figure of 72% market share is six percentage points less than Openreach's share of total UK broadband connections in 2020, based on Ofcom and BT data for that year.

Figures published by Point Topic, a market-research company, add to the concern. They show that BT's share of the wholesale local access market has been slowly but steadily declining over the last five years, dropping below the 80% threshold as Virgin and other infrastructure providers have advanced. 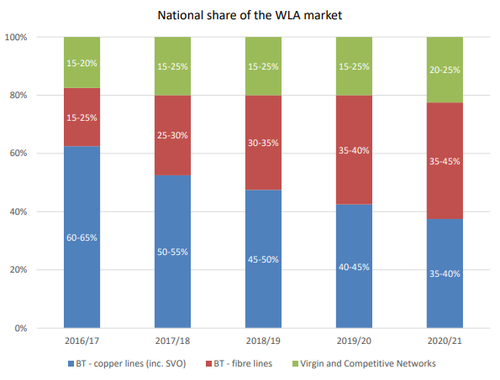 The phenomenon of "overbuild"  where multiple networks target the same areas  is increasingly visible throughout Europe, said Analysys Mason, a firm of consultants and analysts, last year. In a report available on its website, Richard Morgan, a partner, said the economic case for overbuild depends on multiple factors, including network deployment costs, revenue potential, market structure and wholesale arrangements.

But he also noted that Openreach is deliberately overbuilding its rivals, a move Deutsche Telekom is keen to avoid in Germany. "This announcement comes at a time when over 100 altnets are competing in a 'land grab' across the UK, and some have argued that Openreach's increasingly ambitious targets could be posturing designed to scare off altnet investment," said Morgan.

Openreach's full-fiber take-up rate of 25% may not seem that troubling in a country where only a third of homes can access a full-fiber service. But if fiber supplants copper in the next few years  as many experts anticipate it will  then Openreach would need to do much better to avoid being weakened. And a glance at the status of incumbents in competitive, fiber-rich markets is not comforting. In Spain, where Analysys Mason last year put full-fiber coverage at 93% of households, Telefónica's take-up rate has remained at 29% for the last five quarters, for instance.

That is a lot of unused fiber, and rolling it out in the UK is not cheap. Passing a UK home with fiber costs less than it used to but still requires an upfront investment of about £300 ($377) on average, according to BT, whose capital expenditure soared 25% last year, to nearly £5.3 billion ($6.7 billion). Unless the altnets fail disastrously, BT looks destined for a broadband retreat of some kind. The only question is how much territory it cedes.