The apocalyptic horsemen of coronavirus pestilence and Ukrainian war have caught up with Finland's Teleste and sent the small broadband equipment maker sprawling. Operating profits this year are expected to fall "significantly" from the figure of 5.5 million (US$5.8 million) in 2021 (Teleste was not more specific), warned CEO Esa Harju in a statement issued after markets had closed last night. Material and component shortages have hurt deliveries, while inflation and costs are on the rise, said Harju.

The Helsinki market's reaction this morning seemed to be a panicky sell-off, sending Teleste's share price down as much as 18% before noon. It is one of several big dips this year, the last of which came in early May when Teleste reported a sharp drop in profitability but guided for a full-year improvement. Shares had subsequently recovered but have now dropped 22% this year.

The sudden change to guidance is likely to have alarmed investors. It points to managerial shortcomings, a rapid deterioration in the market environment or both. Whichever, confidence in the company has slumped and shares are trading at their lowest level since March 2020, when COVID-19 swept into town. 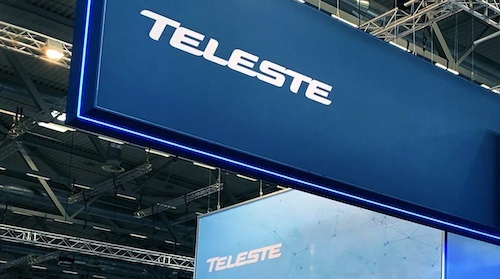 Teleste's update comes weeks after its first-quarter report showed a 2.6% year-on-year increase in revenues, to 38 million ($40 million), and a record order backlog. The Finnish company was a small beneficiary of the broadband investment boom, helping service providers to build high-speed networks that could cope with surging adoption of Internet services  originally triggered by the COVID-19 pandemic.

But the bottom line was already sagging back then. Teleste's net profit almost vanished entirely, dropping 97.2%, to just 100,000 ($105,200). Having generated positive cash flow of 2.6 million ($2.7 million) in the first quarter of 2021, it was staring at a 4.8 million ($5.1 million) loss. Harju blamed an "exceptionally challenging component availability situation" along with investments in growth and "operational capability delivery assurance" for increasing costs.

Yet a breakdown at the time reveals that material and production service costs were up just 3.6% and personnel costs by as little as 1.2%. By far the biggest cost increase was the 29% rise for "other expenses," including subcontracting and business travel. Those came to 5.4 million ($5.7 million) altogether, about 14% of the total.

Despite the collapse in profitability, Harju was also telling investors that Teleste could manage. "We have largely succeeded in transferring increased material costs into our customer prices, thereby protecting our product margins," he wrote in his first-quarter update. "We have also succeeded in maintaining adequate delivery capability despite the component crisis."

War in Ukraine and pandemic restrictions in China were identified as twin evils by Teleste in May. Both, it said at the time, were adding "uncertainty to material and component availability." Nor is the only company to have recently warned of the impact. STL, an Indian maker of optical equipment, says the Ukraine conflict has affected supplies of important raw materials such as helium and polymers, noting that Russia is a major supplier of helium. Restricted imports from China are an additional factor, according to STL.

Next steps for Teleste include several measures aimed at protecting profitability. Besides improving its delivery capability, it has indicated it will pass on rising material costs to customers "with determination." Yet both measures were apparently tried in the first quarter, and customers served with higher bills could simply decide to slow down the pace of broadband deployment. The alternative would be to pass costs onto their own subscribers, but that might risk a consumer backlash.

Few would be surprised to see layoffs. Headcount has already dropped sharply in the last few years, falling from about 1,500 in 2016 to just 862 at the end of March this year. The sale of service divisions explains that slump, but staff typically suffer when companies are determined to protect profitability  unless they work in software. A shortage of skilled developers requires "management attention," said Harju in his first-quarter update.

Analysts who track the sector may wonder if there are implications for much bigger equipment vendors like Ericsson and Nokia. While neither has run into major problems so far, Nokia did blame supply chain constraints for a 4% year-on-year "organic" drop in sales at its mobile division in the first quarter. And the war in Ukraine seems unlikely to end anytime soon.