US to Get New Ericsson Factory  but Not Many Jobs

One of Donald Trump's big election campaign pitches aimed at angry Midwesterners was that jobs had disappeared due to unfair competition from the Chinese. Put an end to that and prairieland would see an employment boom, was the subtext.

The trade war the US President has launched against China is certainly forcing some companies to ramp up US production. This morning, Swedish equipment maker Ericsson said it would open a new "smart factory" in the US early next year. That move follows reports that US authorities were demanding Ericsson and Finnish rival Nokia stop using Chinese facilities to make 5G kit for the US.

Unfortunately, for Trump's fanbase, Ericsson won't be relocating many jobs with its latest investment. The clue is in the "smart" reference, which basically means that traditional human roles are out, and machines are in. As few as 100 people are initially to work at the facility, "which will have highly automated operations" cranking out advanced antenna systems for new 5G networks, says Ericsson. It is all so agile that Ericsson hasn't even figured out where the factory will be: The vendor will see what different local authorities have to offer before making that decision, it seems.

We Will Fight Them on the Basestations 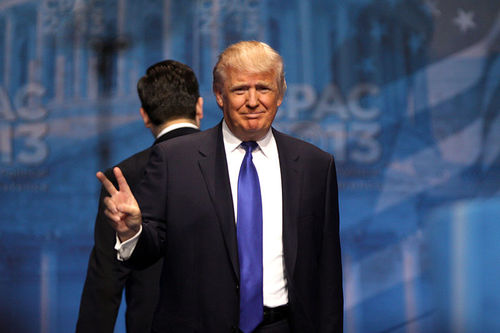 Trump pulls out Churchill's V for victory sign as he battles China on trade.

If anything, the investment could hit employment rather than help it. Last August, as part of some Trumpian de-globalization strategy to move production closer to customers, Ericsson said it would hire hundreds of US employees dedicated to 5G and artificial intelligence. The job of making 5G gear, it said, would initially go to Jabil, a US manufacturing partner with headquarters in Florida. The smart factory means Jabil's services are no longer needed, it appears.

Asked about the ramifications for the Jabil relationship, an Ericsson spokesperson had this to say by email: "Ericsson has worked initially with a production partner in order to bring the first radios for the US at the end of 2018. Now we are taking a next step by establishing our first fully automated smart factory, which will be up and running in early 2020. It will take over all production activities in the US."

Heavy reliance on automation should come as no surprise. Ericsson had 94,580 employees worldwide at the end of March, having cut nearly 21,000 jobs in the preceding three years. Many have been cut because of divestment activities, as Ericsson has narrowed its focus. Others have been lost to automation, the company has previously acknowledged.

And North America has suffered more cuts than North East Asia, the accounts show. The workforce in the US and neighboring countries had shrunk to 9,246 employees by March, from 14,081 three years earlier. In North East Asia, it was down from 13,623 to 13,169 over the same period. That region today accounts for about 14% of all Ericsson jobs, up from 12% in March 2016: North America's share has declined from 12% to 10% over the same period.

There is a good and obvious reason: Asian markets are stocked full of low-cost labor. If Ericsson must move production into the US to satisfy belligerent officials, it will rely on tireless robots and "autonomous carts" wherever it can. "We are digitalizing our entire global production landscape, including establishing this factory in the US," said Fredrik Jejdling, Ericsson's head of networks, in the statement about the move. "With 5G connectivity we're accelerating Industry 4.0, enabling automated factories for the future."

This digitalization is not confined to the US, of course. But a US policy that leads to a fragmentation of global supply chains, and drives up production costs, may force Ericsson to automate faster in other parts of the world, too. Besides investing in the US, it is "fast-tracking" the launch of smart manufacturing processes in Brazil, China and Estonia, it says.

Exacerbating all this is the fact that margins are expected to come under pressure later this year as Ericsson tries to boost its market share. And Ericsson is anticipating a "material financial" impact from a US fine for corruption under a previous management team. The Swedish vendor is through with the huge cost-savings program it announced in 2017. But officials expecting a 5G-fueled jobs boom in the telecom equipment sector may be in for a shock.