TMF rethinks B/OSS with ODA, but will industry care?

Back offices are often cluttered and chaotic places, where old ledgers gather dust and the slightest fumble can send them sprawling. The back-office IT systems that support today's telecom networks are little different. Commonly referred to as business and operational support systems (BSS and OSS, or just B/OSS), these jumbles of ageing but hard-to-eradicate technologies have become a kind of digital no-go zone for the telcos that have built them up.

Service providers have long dreamt about sweeping away the B/OSS clutter and replacing it with sleeker, more fit-for-purpose technology. But the lack of a standardized approach has bedeviled this "digital transformation." A new initiative unveiled today by the TM Forum (TMF), a well-known industry association and standards group, is intended to help.

Bearing the high-sounding name of Open Digital Architecture (ODA), that initiative is being grandly touted by the TMF as a "blueprint for an IT architecture fit for a digital world." Its overriding goal, says the group, is to give the industry a common set of principles for the rollout of new IT systems that operators can use alongside other whizzy technologies, including virtualization, artificial intelligence (AI), cloud computing and microservices.

Thinking Outside the Box? 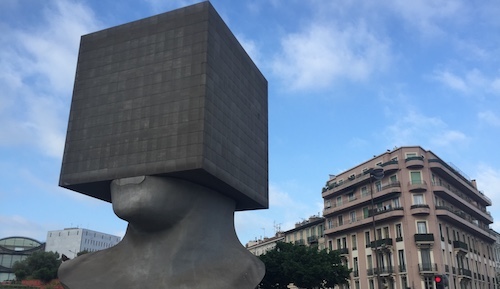 The blockhead sculpture by French artist Sacha Sosno is located right next to Nice's Palais des Congrès Acropolis, where the TM Forum holds its annual conference.

"The first problem this will solve is regarding the procurement process, which is tortuous today for buying any OSS or BSS and getting worse," says Andy Tiller, the TMF's executive vice president for collaboration and innovation. "Anything that standardizes that can take a massive amount of time and cost out of deploying new IT components."

This is, essentially, the problem the TMF was set up to address back in the late 1980s. If every service provider develops its own blueprint, vendors have to spend longer customizing their technologies, driving up cost and effort. Standardization has been a mitigating force.

It has also grown in importance as interoperability has risen up the telco agenda. Operators have recently made a big deal of their desire to mix and match technologies from different suppliers, including the open source community. They also want to open their networks and IT assets to third-party developers of potentially lucrative applications.

As a framework for replacing older back-office systems, the ODA blueprint also aims to make operators more digitally capable. If a future "Internet of Things" really does comprise billions of device connections, operators will have to be able to make and process a huge volume of network decisions without delay. A feature of ODA, says Tiller, is a common data plane that can share usage data across systems in real time. That should allow operators to speed up activities, such as reconfiguring a network in response to customer demands.

In the future, these processes will be increasingly automated as operators use AI to make decisions. "The data plane has the benefit of making the system AI-ready," says Tiller. "AI will connect directly into this data plane and have all the data it needs to figure out decisions."

This appears to be a step up from the automation happening today and heavily reliant on predictability. "If you know something will happen every day, like the city getting quieter at five o'clock, then you can implement a business rule and automate it," says Tiller. "AI comes in when you don't know the rule. It means you don't need to figure out the business rule and then a process to automate it. That just happens."

Next page: Revolution or rebranding?