Taking a Pulse on Network Automation

Comment (0)
Networks are big, complex beasts of protocols and technologies that have been breaking under human error ever since their connections grew past what you could count on one hand. They are full of interdependencies and obscure interactions that need to be fully understood by their administrators if they are to successfully maintain a high-level of availability, which is a constant struggle under the time pressures that growing businesses create.

Automation is network engineering's best hope for managing this complexity, despite its ability to break a network as quickly as a foolish human error.

The network automation survey we developed in partnership with Cisco and Ciena Blue Planet took a pulse on the network investments being made as well as creating a better understanding what is standing in the way of network automation. The February 2019 survey attracted 71 responses from communications service providers and included questions on the priorities and challenges in investing in automation for various network and data systems.

Is there a reluctance to using automation in networks? For some, absolutely. Network engineers are not software developers with deep programming skills, but at the same time, it's clear to them that tweaking the configurations on hundreds of switches and routers should not be attempted manually. Removing, or more realistically, limiting human error may be the most important motive behind network automation, although in the study that translated into improving the network's performance and making it easier to manage.

While it was interesting to see how varied the progress is among communication service providers in terms of their investments and where they currently sit along their automation journey, it was very clear which aspect of automation is most important to them.

More than half put services provisioning and delivery ahead of everything else. Service delivery automation is a general term for the technologies used to automate the human actions within an IT or business process. But while investing in automation to improve service delivery may appear to run counter to their priority to reduce costs, it will ultimately improve operational expenditures over the long run by reducing the size of the workforce needed to fulfill services and possibly shrinking the need for outsourcing. It will also produce high impact value by speeding up processes, improving compliance procedures and freeing up resources for more valuable tasks. 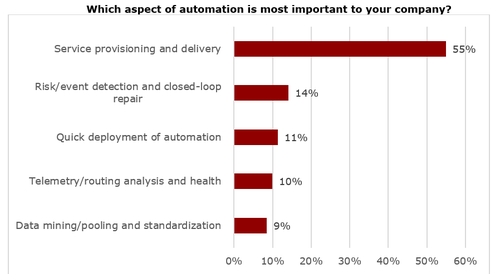 The results from the survey are clear: Automation is looked at as a catalyst to a number of valuable benefits that sync with the priorities of communications service providers. It is a near imperative for networks already overwhelmed from the connection requirements of the current world and a critical piece to building the seamless experiences customers, partners and employees increasingly expect.

In the second installment of this four-part sponsored series, we look at some more key highlights from a new Heavy Reading study about the broadband industry's plans for closing the Digital Divide.