Juniper Turns Contrail Into a Platform for Multicloud

SAN FRANCISCO -- NXTWORK 2017 -- Contrail has turned into a lot more than an SDN controller for Juniper. It's becoming a platform that will be the foundation of Juniper's network automation in a multicloud world.

A taste of Contrail-as-platform was announced today at NXTWORK, Juniper's annual customer conference. The new product and service is called Contrail Enterprise Multicloud and it's a single orchestrator for an enterprise's multicloud environment -- that is, it orchestrates workloads across a mixture of private clouds, multiple public clouds and on-premises deployments.

It's like a supercharged version of Contrail Cloud, Juniper's offering for orchestrating the telco cloud. (See Juniper Enhances Contrail Cloud.)

"The idea [is] that we're taking all the power that Contrail already had, in being one of the most popular SDN overlay infrastructure in the world, and enhancing it with support for underlay and support for public cloud," said Bikash Koley, Juniper's recently appointed CTO, during the morning NXTWORK keynote. "We have the software so you don't have to do it yourself." 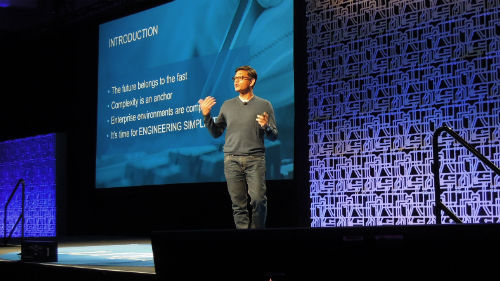 Koley didn't get into details, such as whether Contrail Enterprise Multicloud is immediately available.

Juniper acquired SDN controller startup Contrail in 2013. An open-source version exists -- it's called OpenContrail, and it's become a Linux Foundation project, as Juniper announced today -- but Koley was talking about Juniper's commercial version.

"Its use cases have thus far been somewhat limited, but there's a next act to Contrail, one that we have been working on for several years," Rahim said. Beyond the multicloud use case, Juniper envisions Contrali becoming the controller platform behind SD-WAN and the public cloud.

The overarching theme of NXTWORK is simplicity. This was obvious from the start. As the audience filed into the conference's plenary space, artsy slides featured featured quotes from the likes of Albert Einstein and Leonardo da Vinci, talking about how essential simplicity is, and how difficult it is to achieve.

Simplicity is imperative in the coming world of multicloud deployments, Rahim stressed. It's not just that customers will spread workloads around multiple clouds.The trend toward edge computing means more functions and more infrastructure will be distributed farther away from the cloud, creating a more complex network.

"Enterprise is way more complex than any of the hyperscalers are," said Koley, who previously worked at Google and has experience building a hyperscale cloud. Google and its ilk had the advantage of building from scratch, with no regard to legacy appliations, and they built a network that had to deal with a small set of applications. The enterprise is a lot messier, he said.

What would Contrail be doing with OpenStack? Providing VxLAN type virtual links between virtual ports on KVM instances that were instantiated by OpenStack on-demand? This is more of a use case for a web scale eCommerce app than an Enterprise app and not what I'd call "mass adoption" use case, but who knows.

In the case of an dynamic application that might be on OpenStack a containerized microservices application will be more responsive to traffic demands and benefit more from having dynamic links applied to the containers by the SDN controller.

While organizations are using multiple clouds they are not necessarily spanning their applications across these clouds and requiring VxLAN type virtual paths between the multiple clouds. A more common case is where micro-services additions to an application might be extended to a cloud with links back to the enterprise DC where the main application resides.

No doubt organizations are looking for alternatives to the VMware tax and they are adapting their applications by adding microservices extensions to them or developing new versions of them using new technologies and eventually abandoning their legacy applications which don't work with these newer technologies.

So vendors like Juniper are hyping these SDN technologies to start conversations with customers and motivate them to take action and buy something.
Reply | Post Message | MESSAGES LIST | START A BOARD

I'd like to address a few of the comments posted by the user below. DISCLAIMER: I work for Juniper, but these opinions are my own.


While connecting "scale out containerized microservices applications" is certainly a use case that Contrail is capable of and excels at, it was not the use case that it was originally built for. If we look back to the use case where Contrail first saw mass adoption was as an SDN controller for OpenStack environments, sans containers. Containers were a natural progression as the market matured. And the same can be said for support for multicloud - considering 85% of enterprises are using multiple clouds (according to RightScale's 2017 State of Cloud report.)


According to same report, 40% of enterprises use Docker with 30% more planning to use it. Datadog's recent container study also backs up and expands on those numbers. To me, that is significant enterprise adoption considering Docker containers have only existed since 2013. RightScale's report also indicates that Enterprise DevOps adoption ia now at 84% - while you can't necessarily draw a straight line between this and container adoption, you can safely assume that they are not apply DevOps principles to these monolithic legacy apps you speak of. Unless of course, they are refactoring them - which would probably include the use of containers anyway.


Yes, VMware has a massive install base, but in my experience, many enterprises are looking for alternatives. VMware everywhere is prohibitively expensive (VMware on-prem + VMware on AWS + NFX to connect all things.) BTW Contrail works with VMware too :) Alternatives to VMW like Red Hat's KVM and OpenShift are killing it right now in the enterprise, and it just so happens that they are container based, and multi-cloud too. (Oh yeah, Contrail supports this stack as well.)


I agree that there isn't a huge need to change legacy apps. But enterprises are under a tremendous amount of market pressure, forcing them to find new business models which often includes the development their own, new software. Often times this new software needs to speak to old software. Simplifying the connectivity between all of these disparate environments can be a huge advantage for enterprises. I also agree that there are a segment of the enterprise space that where none of this is a priority. But I think they this segment is increasingly becoming the minority - and may I suggest that their future is probably not so bright.

lightreceding 12/12/2017 | 4:52:51 PM
Juniper needs something cool to talk about Vendors including Cisco, VMware and Juniper have been talking about this multi-cloud world for years. They need something to hype to get the customer's attention.

If the organization needs to apply an overlay and the application is running in VMs they will most likey use NSX since VMware is the most popular hypervisor with the Enterprise. But there has to be some compelling reason for using an overlay and that has to do with the application being dynamic and spinning up VM or moving VMs, which isn't the case for most enterprise applications. eCommerce being the likely use case.

There isn't much need to change legacy applications and many of them are not designed to work with these newer technologies.