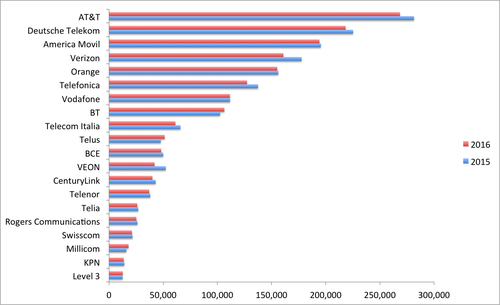 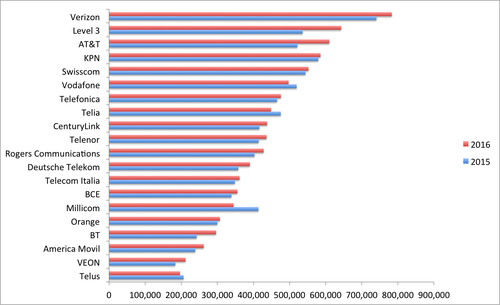 Phil_Britt 11/24/2017 | 11:48:09 AM
Re: Technology selection = efficiency of operations = adjustment of headcount = net margin increase But with contractors and outsourcers, there isn't the cost of benefits (which not all contractors offer to employees) and other costs. I interviewed a bank president one time who mentioned that one reason to use technology over a human, even if the costs were similar, is that the technology can't come back and sue the bank about termination at a later date (even if lawsuit is frivilous, still costs money to defend).
Reply | Post Message | MESSAGES LIST | START A BOARD

Duh! 11/17/2017 | 11:35:25 AM
Re: Technology selection = efficiency of operations = adjustment of headcount = net margin increase Excellent point. In all likelyhood, Verizon's revenue/employee figure arises in part from their decision to deploy FTTH through a large part of their footprint, followed by downsizing their field workforce.

Gabriel Brown's point is also well taken. All those labor costs still show up in the financials, in gross margins, or  capex. It's not as if the companies are lacking for incentives to contract out as much work as possible.
Reply | Post Message | MESSAGES LIST | START A BOARD

Gordy779 11/17/2017 | 9:07:46 AM
Technology selection = efficiency of operations = adjustment of headcount = net margin increase Very good article but it is not unexpected in that most companies always seek efficiencies of operation and technology is starting to deliver that capability.  This will continue and as AI becomes more appropriate that will also be deployed driving more efficiencies.

For example, the efficiencies of a fiber/wireless based network versus a copper based network.  These costs will directly reflect in the "revenue per employee" number and will drive the deployment of new technologies for greater efficiencies!

I don't think in many cases they are much more efficient, more just outsourcing and offshoring the inefficiency to make it cheaper.

The lack of unions is one of the big advantages that the cable guys have.  I remember how much the unions hated FiOS because of the job reclassification.

I know the article focused on some AT&T numbers.  One thing that I wonder was how much of the reduction was a natural result of the integration of Direct TV.

Duh! 11/14/2017 | 12:33:45 PM
Not just automation Don't underestimate Verizon's point about efficiency through network upgrades. A large percentage of the workforce carries union cards and wears hard hats at work every day. Fiber/DWDM/PON/Ethernet/IP networks are a lot less needy than their copper/POTS/TDM/SONET counterparts. Also, as Karl Bode likes to point out, certain Telcos have, um, relaxed their standards for maintaining copper plant.

Also, contractors don't count as employees. A lot of customer service jobs have been offshored. Labor agreements over the past few periods let them use more contractors for major projects than in the past.