BT looks more bloated than ever

When BT last year said it would cut 13,000 jobs in its latest effort to bolster efficiency, many onlookers were astonished. Not that BT, the UK's former state-owned telecom monopoly, needed such a dramatic fix: This much was clear amid growing regulatory and competitive challenges, and after an accounting scandal in Italy wiped billions off the operator's market value. The shock was that a company trumpeting concepts like "agility" and "digital transformation" could so easily dispense with enough employees to fill Wembley Arena. (See BT to Slash 8% of Jobs in Efficiency Drive.)

Just what have all these "workers" been doing over the past few years, was the question on some lips. If BT Group plc (NYSE: BT; London: BTA) were still a public sector company, the update might not have come as a big surprise: Inefficiency and the government sector go together like Boris Johnson and bad hair. But the privatization of BT happened 35 years ago, before some of the mid-tier managers set to lose their jobs were even born.

For anyone keeping an eye on BT's numbers, however, the signs of inefficiency were always there. Despite generating most of its revenues in the UK, BT employs about the same number of people as Vodafone Group plc (NYSE: VOD), a multinational operator that runs mobile networks in every region outside the Americas. At the last reckoning, BT's employee base was about 87% as big as Spain's Telefónica -- which, like Vodafone, has built a huge telecom empire outside its domestic market. Telecom Italia, another European incumbent with a more limited overseas presence, has nearly half as many employees as BT. (See AT&T, Time Warner Shed 11K Workers in First 9 Months of 2018 and Big Telcos Have Slashed 107K Jobs Since 2015.) 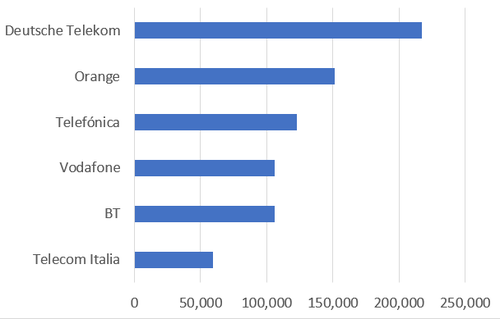 In fact, of the main European operators, only Deutsche Telekom AG (NYSE: DT) is dramatically bigger than BT. But more than 50,000 of the German incumbent's 217,000 employees work for T-Mobile US, Deutsche Telekom's North American subsidiary, and nearly 48,600 are assigned to operating companies outside Germany. At home, Deutsche Telekom has long struggled to prune staff numbers in the face of resistance from trade unions. The mooted sale of Germany's 31.9% stake in the company could remove a potential barrier to layoffs, although it has been a talking point for years. (See DT Targets 1.5B in Automation Savings, Misses Former Target.)

Employee numbers do not tell the full story, though. Only when they are analyzed next to sales does BT's inefficiency become fully apparent. Using current exchange rates, BT generated less in revenues per worker than any of its five main regional peers in 2017. Vodafone, the most efficient operator on this measure, generated about $217,000 more per worker than BT did that year. Even Telecom Italia, an operator that few would look to for an example of efficiency, is way ahead of BT on revenues per employee. 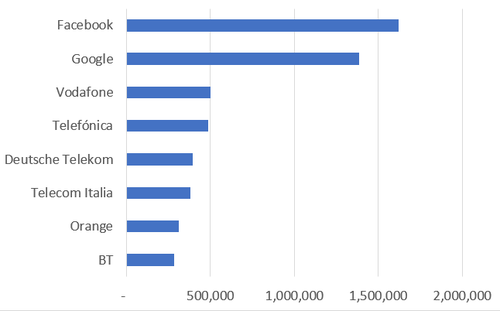 Financial analysts have traditionally paid little heed to revenues per employee when assessing a company's performance. In the telecom sector, they are likely to have preferred operational metrics such as average revenue per user, or subscriber additions in the more lucrative "post-paid" segment of the mobile market. Yet this looks set to change in a low-growth environment where the sole way to lift profit margins is by cutting costs. Besides shrinking its real estate footprint, and adopting more efficient technologies, an operator can do this organically only by shedding staff without crimping sales. If the strategy works, revenues per employee will rise.

Fortunately for investors (but not employees), developments in artificial intelligence and concepts such as intent-based networking are helping operators to cut staff numbers without damaging sales. The most sophisticated "chatbots" can now handle customer enquiries as effectively as a person would, according to operators that are investing in the technology. In an intent-based network, many of the complex tasks that gobble up an engineer's time can be automated. Apstra, a software company that claims to have pioneered the concept of intent-based networking, says one of its data center customers has been able to slash relevant man hours by 83%. (See Robot Wars: Telecom's Looming AI Tussle.)

Operators and vendors like Apstra have played down the impact of automation on the workforce. With automation, they argue, staff can be given more interesting jobs while machines take care of the boring stuff. But many executives also acknowledge that automation will have a human cost. Moreover, staff numbers at many of the world's biggest operators have been falling as bosses make automation a strategic priority. (See The Automation Taboo: Let's Talk About Jobs.)

Still growing
So far, BT has managed to buck this downsizing trend. Indeed, after announcing its redundancy plans in May, it picked up another 659 employees in the subsequent months to give it nearly 106,500 at the end of September. In addition, BT's takeover of EE does not appear to have triggered the layoffs that normally result from merger activity, as duplicate roles are cut. Including the 12,130 employees who came with EE, BT's headcount rose by 14,000 in the year it bought the mobile operator, growing from 88,500 in March 2015 to 102,500 a year later. Since then, it has grown by 4,000.

This may surprise observers who recall that BT said its restructuring program had "removed" around 2,000 roles when it reported earnings for the six months to September 2018. A closer look at the figures shows that BT cut more than 1,100 jobs at its global services division in the preceding year, and more than 800 jobs in "other" areas. But it also gained more than 1,200 workers at its consumer business, and nearly 900 at Openreach, the fixed access networks arm.

For all the latest news on automation, check out our dedicated automation content channel here on Light Reading.

Besides planning for 13,000 layoffs, BT previously indicated it would recruit another 6,000 employees "to support network deployment and customer services," for a net reduction of 7,000. Yet many of the network jobs could disappear once it has finished building its all-fiber and 5G networks, and the customer service roles may become obsolete in future as chatbots continue their advance. (See BT Cuts 2K Jobs to Boost Profits as Sales Dip.)

Even with 7,000 fewer employees, BT would lag its regional peers, generating about $303,400 in revenues per employee if there were zero growth in sales. The cuts it has announced might not go far enough for some investors, especially if operators are increasingly compared with highly automated tech giants like Google and Facebook, which made per-employee revenues of $1.4 million and $1.6 million respectively in 2017. But the UK operator will have to start somewhere -- and soon.