Atrinet faces a challenge familiar to many developers of communications network technology: It believes it has a market-leading, genuinely useful product that would improve the operational performance of its users, but has struggled to convert that belief into market traction and awareness.

Its proposition is certainly one that should resonate with telcos, systems integrators and other networking vendors around the world: That it can enable network operators to manage hybrid networks -- a mix of legacy hardware and 'new age' virtual functions  using a single software tool that can also work in tandem with OSS systems and SDN controllers.

As it seeks to gain that elusive market traction and awareness, the Tel Aviv, Israel-based vendor at least has an existing business to keep it ticking over: When it was founded in early 2014, as a spin-off from Nokia Siemens Networks' (now Nokia) Carrier Ethernet business, it already had network operator customers and cashflow, and still has more than 40 customers (including major Tier 1 operators such as AT&T, China Mobile and Orange) that use the technology inherited from Nokia. The privately-held company is profitable, according to the management team, and it's a relatively lean operation, with fewer than 50 employees, mostly in R&D. It has one external investor, VersoVentures, which took an unknown stake at the time of the spin-out.

During the past four years, though, Atrinet Ltd. has failed to set the industry alight, despite having developed a software system designed to tackle one of the biggest challenges facing telcos today  managing multi-vendor hybrid networks that are a mix of legacy hardware and virtualized functions and helping to integrate those virtualized functions into existing networks.

One of Atrinet's main issues until now, though, is that it has pitched itself as a supplier of a 'big bang' management tool, one that should be deployed as the management mothership at the heart of a long-term network management strategy and run an entire network via an interface that didn't require in-depth knowledge of network protocols or development code languages. But that wasn't a story that network operators necessarily wanted to hear (and, very likely, struggled to believe) from a small company with a niche background.

Now Atrinet has a new strategy, developed with the help of independent industry advisor David Amzallag, and it's more tactical. Now the company is pitching its NetACE software as a tool, alongside consultancy services, that can help operators through a significant transition or a major network transformation project based on two of its key attributes  its network discovery and activation tools and its ability to help operators automate some network management processes.

By aiming to play a key role in network and system transformation plans, Atrinet can now broaden its appeal and seek to work with systems integrators and major vendors as well as working directly with operators, notes Amzallag, who has experience working in senior roles at network operators (Vodafone, BT) as well as vendors (Alcatel-Lucent, Amdocs). Key to Atrinet's appeal is that, over the years, it has worked with its existing customers on network discovery projects and strategies that have exposed it to many vendors' systems and the APIs that connect those systems to others, enabling Atrinet to build up a library of APIs upon which it can develop multi-vendor transformation programs, adds the advisor.

Now it's using that library of information, a DevOps development approach and NetACE's multi-vendor management tools to target operator pain points and has already won a contract with Hudson Fiber Network in the US based on its new approach. (See Hudson Fiber Network Deploys Atrinet's NetACE.)

The vendor's VP of R&D, Roy Silon, notes: "We have pivoted to provide NetACE as a toolset alongside professional services to identify and then help deal with specific use cases. Atrinet now offers a project tool, rather than an all-encompassing network management tool," which is what Silon discussed in a video interview with Light Reading recorded in April 2016. "In addition, we have streamlined NetACE to work with SDN controllers to provide them with the ability to manage legacy elements in hybrid networks SDN controllers lack the ability to manage legacy devices well." (See Atrinet's NetACE  Migration to NFV & SDN With NetOps-Driven LSO .) 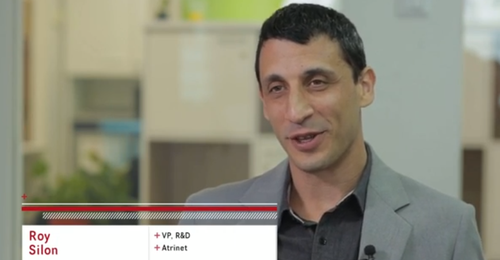 Atrinet's Roy Silon, talking to Light Reading before the shift in strategy.

CEO Efi Levy hammers home that hybrid network integration pitch, claiming that Atrinet can "help legacy and emerging technologies work together," and noting that "legacy tools are not ready for SDN and NFV." That latter point is certainly the case, based on survey results from Heavy Reading, which found that the inability of existing management tools to deal with SDN and NFV implementation was the single biggest challenge faced by network operators.

Addressing that challenge would certainly hit many operator pain points and sounds impressive but is also somewhat nebulous, which is why the Atrinet team, with help from Amzallag, has put together a set of use cases to pinpoint where it believes it can have an impact on network operations and provide project-based support. Those use cases revolve around; the starting point of network discovery and understanding; moving into early automation and zero-touch provisioning; include the onboarding of new vendors and technologies (including virtual network functions); cover mass configuration based on 'network understanding' (for example, enabling VoLTE features in multi-vendor and multi-technology environments); and even stretch as far as real-time service automation, in addition to enhancing SDN controllers with multi-vendor management capabilities in hybrid networks.

Opportunities related to these use cases are now emerging, including the migration and enrichment of inventory systems, enabling multi-vendor SDN controller-based management in OpenDaylight deployment environments (Open Contrail and ONOS are also being addressed), and onboarding new vendors into leaf-and-spine topologies.

Amzallag notes that an operator with a pure NFV environment wouldn't need to think about Atrinet, "but if your network is full of legacy technology with many vendors," then that's where the company could help.

The list of detailed use cases will only grow in the coming years as network operators are forced to operate hybrid networks and find the appropriate management tools for transition phases. "These transitions will be ongoing for five maybe ten years we believe we have the opportunity to enable transitions and [work closely] with operators, vendors and systems integrators," adds Levy.

If that's the case, Atrinet will need to broker more relationships and make itself much more visible. The company is already working with Amdocs on some projects and already has some relationships with Tier 2 local and regional integrators in markets such as Germany, but the CEO knows that more needs to be done and says that talks are underway with larger SI players.

Atrinet has a compelling story to tell and some hard evidence of real-world experience to back up its multi-vendor hybrid network management claims. Now it needs to get past the Catch 22 situation that faces companies looking to break new ground and position themselves in a new and relevant way  how to win big name, attention-grabbing reference accounts so it can attract the attention of big name accounts that often baulk at working with smaller, more specialist vendors. Amzallag looks likely to play a key role there.