Last week I headed down to Dallas for Light Reading's inaugural Automation Everywhere conference, which was, to put it bluntly, a smash hit. I can't remember a more talkative and qualified audience. (More than 65% of attendees worked for CSPs and Tier 1 carriers.)

The overall message from the conference was "automate or die" -- with speakers agreeing that CSPs must embrace disruptive automation technology to survive. And attendees agreed that these are very early days in the cycle of automation adoption, with very few service providers taking more than baby steps. That said, overall our audience was optimistic about the scope for automation to increase cost efficiency and enable operators to better address new revenue opportunities in the enterprise market. 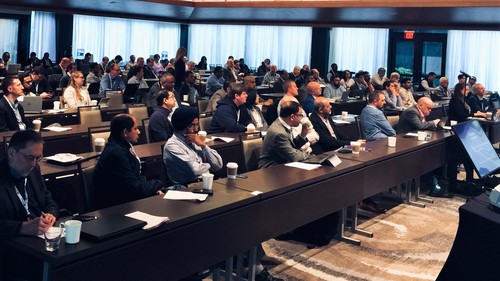 Here are the other key findings from the day:

It was clear that Light Reading's Automation Everywhere is the right event at the right time for CSPs looking to save money and generate new revenue through automated processes. Well, I have some good news: We will be analysing and debating this vital topic in London in November at Light Reading's Software Defined Operations & The Autonomous Network event. I strongly recommend taking part. With the help of some exceptional speakers, we grasped the automation tiger firmly by the tail in Dallas, and the London event, which runs for twice as long, will build on this success.

It's your blog posting is a very good response for any user or blogger. While using the HP printer, there is a time when a user faces some kind of issues.  You can contact our website to click on HP Printer Error Codes 52.x and 54.
Reply | Post Message | MESSAGES LIST | START A BOARD

patricknmoore 4/12/2018 | 11:02:02 AM
ONAP and automation I think, as a couple of folks have pointed out, that this does come down to a maturity level for ONAP and within the SPs involved. ONAP is not to a level yet that you download, install and start using it in a short amount of time. Likewise, many of the SPs are maturing themselves with regard to point of view of how to best automate with the plethora of tools available now and coming down the pike from vendors old and new.

I would bet ONAP is on every SPs list of potentials down the road, but it is not as exciting to talk about due to the maturity level. AI is hot, but it isn't like there is a ton out there right now that is usable either. Add to that the fact that people will lump into AI things that are not truly AI...I have a friend that is working in this area and he is quick to correct people that include machine leanring and the like in the AI bucket. Maybe he is an "AI snob"? That is another conversation altogether.

I do like hearing the comments about small steps, not jumping too far ahead, etc. Traditionally companies will jump into an automation project that should really be step 3 or 4 of an overall automation program, instead of planning out and executing on steps 1, 2, 3 and 4, thereby realizing much more success and return.

Taking baby steps, that tranistion into a brisk walk, that tranistion into running over time is the smarter way to automate, in my humble opionion. The misconcpetion is that it is faster to jump ahead in the automation lifecycle and "just figure it out". There is absolutely no reason to think that starting with small steps and going through that ramp up is mutually exclusive with velocity in getting automation implemented.
Reply | Post Message | MESSAGES LIST | START A BOARD

Carol Wilson 4/11/2018 | 1:47:28 PM
Re: Automation and Edge Computing Most of the major operators I've spoken with in recent weeks - AT&T, Verizon, CenturyLink, Orange, Colt, BCE, Vodafone -- all talk about ONAP being important to their future, so that is surprising.

I'm not sure I'd agree it's PR versus reality, but there may be a timing thing. The conversations I've had have been with the technical guys who are aren't terribly concerned with PR. Javier Benitez from Colt, for instance, says ONAP is absolutely important to them, but he thinks it needs years to mature. And Adam Dunstan from CenturyLink says ONAP is definitely interesting to them, but since they aren't using the tooling, they aren't likely to join any time soon. Instead, they'll use pieces of the software and contribute the changes the make to it.

Agree - I was struck by the AI finding as well. When I hear "AI" from providers/vendors, I translate that into more concrete terms like "closed loop automation" and "machine learning." I had not viewed AI as something different from these.

mendyk 4/10/2018 | 11:22:47 AM
Faith in the unknown Steve -- The AI buzz falls into the usual pattern of placing early trust in a vague concept, doesn't it. Kind of like IoT -- a concept that is so general that it means everything and nothing.
Reply | Post Message | MESSAGES LIST | START A BOARD

Steve Saunders 4/10/2018 | 10:55:19 AM
Re: Automation and Edge Computing Re: ONAP. We were surprised too. Its the difference between PR and reality, probably. If you look at how much support ONAP has at a press release and logo level you would think its success is absolutely assured. Then you get into the trenches and talk to real people struggling with virtualization and its just MIA in the conversation. There is a gap or logic bomb in there - and weve seen it before at other industry get togethers.
Reply | Post Message | MESSAGES LIST | START A BOARD

I'm a bit surprised about the ONAP mentions because it is definetly part of the discussion on service provider edge computing. Edge needs automation to be economically viable. Being in the discussion doesn't mean something gets used, obviously -- but it's in the mix.
Reply | Post Message | MESSAGES LIST | START A BOARD
EDUCATIONAL RESOURCES
sponsor supplied content
White Paper: Build Accurate Traffic Matrices with Demand Deduction
White Paper: Learn Best Practices for Core Network Capacity Planning
Case Study: Automating Multivendor Networks to Improve Network Robustness and Reliability
Success Story: How Telefonica Improved Repair Time and Time to Market with Cisco NSO and Crosswork
White Paper: Capitalize on the Economic Benefits of Network Automation
White Paper: Automate Your Certification Process to Onboard in Hours, not Days
Research Study Results: Service Providers save 50-70% in costs with Automation and Orchestration
Simplify Your Network Cybersecurity Compliance Verification and Reporting with Cisco Crosswork Trust Insights
e-Book - Transforming Telecommunications with Intelligent Automation
Use Case: Sprint Automates 50 Business Processes within 6 Months
Educational Resources Archive
More Blogs from From the Founder
So Long, & Good Luck With That