Frontier Communications' fiber buildout, the core of the company's reclamation plan, reached a record pace in the third quarter of 2021 even as revenues fell shy of expectations.

Frontier added a record 185,000 new fiber locations in the quarter, a rate that was a bit faster than anticipated, bringing its year-to-date new fiber passings to nearly 450,000. 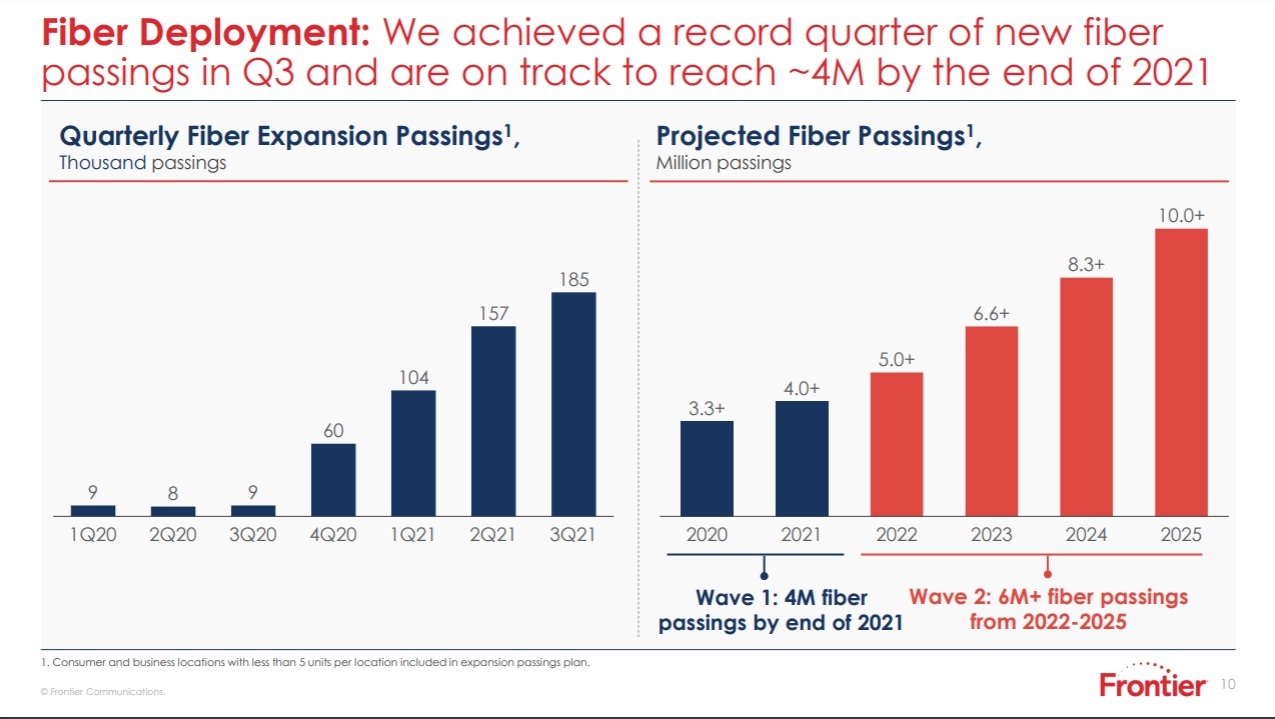 That fits in with a broader, ambitious fiber-to-the-premises (FTTP) buildout plan at Frontier, which exited bankruptcy at the end of April.

A future buildout of Wave 3, which includes some areas that are uneconomic to build FTTP to under normal conditions, could involve joint ventures, federal funding, additional venture funding, or even asset swaps. A resolution on Wave 3 is a "work still in process," John Stratton, Frontier's executive chairman of the board, said on today's Q3 2021 earnings call. He's hopeful that the company will have more details to share in upcoming quarters.

Frontier added a record 29,000 new residential fiber broadband subscribers, up from 6,000 fiber sub adds in the year-ago quarter, and adds of 12,000 in Q2 2021. The company said the "overwhelming majority" of fiber customers added in the quarter were new to Frontier rather than from existing subs upgrading from DSL.

With accelerating DSL/copper subscriber losses factored in, Frontier shed about 8,000 total broadband subs in the quarter. The average revenue per unit of Frontier's fiber subscriber base rose 10%, to $63.35. 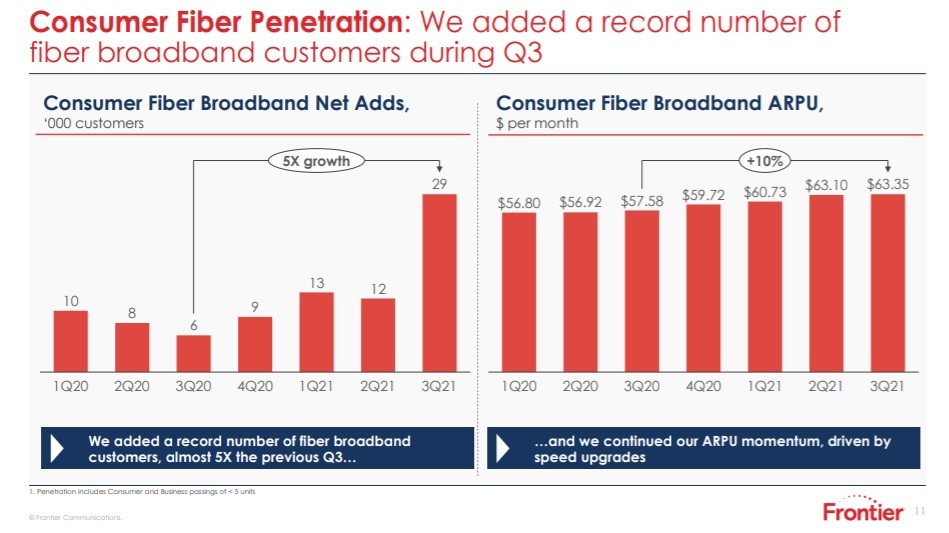 "Frontier is in the early stages of its transformation," Nick Jeffery, Frontier's CEO, said on Wednesday's Q3 2021 earnings call, according to a Seeking Alpha transcript.

Frontier pulled in Q3 revenues of $1.57 billion, off about 0.5% from Wall Street expectations. Consumer revenues, the early focus of Frontier's turnaround effort, were $800 million, down about 3.4% from a year ago, but about $2 million ahead of MoffettNathanson's expected $798 million.

But investors seem to be putting more weight into Frontier's long-term fiber buildout strategy than into the company's quarterly financial performance. Frontier's stock closed Wednesday at $31.98, up $1.22, or 3.97%.

"The Frontier investment thesis is largely, though not entirely, predicated on its network modernization plan," Nick Del Deo, an analyst with MoffettNathanson, pointed out in a research note. He posed the question: Will Frontier's earnings matter as the benefits of its modernization takes time, likely years, to hit the company's P&L in a material way?

He surmised that Frontier's financial results do matter, but not as fully as the future potential value of the company's FTTP buildout plan. "Investing in FTTH across wide swaths of its footprint should enable the company to more effectively compete with Cable and generate far more durable and valuable broadband-centric revenue streams than it has today," Del Deo wrote.

Frontier execs spent part of the call touting the superiority of FTTP over hybrid fiber/coax (HFC) networks. Frontier is moving ahead with XGS-PON technology and making plans to introduce 2Gbit/s broadband services.

Cable operators are deploying FTTP primarily in greenfields, expanding the capabilities of DOCSIS 3.1 networks, and looking more deeply into future DOCSIS 4.0 networks that will deliver multi-gig speeds on their widely deployed HFC networks.

"We've got to bear in mind that whilst we build aggressively and are very pleased with the progress we're making on selling, we're still relatively much smaller than our primary cable competitors," he said. "They are going to have to be very mindful about how they react to us, because it's potentially more expensive to them to react or not react. And that's why I think we're seeing a muted response."

Elsewhere, Frontier execs said the company has so far been able to keep supply chain constraints in check, even as its fiber buildout accelerates. Among mitigation strategies, Frontier "ran a very rigorous procurement process to expand our pool of suppliers for both labor and materials," earlier this year, Scott Beasley, Frontier's EVP and CFO, said. That, he added, resulted in a more diverse supplier base, reduced risks and locked in pricing.

Frontier is still evaluating a potential brand change and is another quarter or two away from making a recommendation to the board. Frontier, Jeffery said, is "evaluating all of the options that we do with the brand, whether we double down on the Frontier brand, we change it somehow, or we completely reinvent ourselves with a new brand."