Executives in the wireless industry have been boasting of the threat they pose to their rivals in the cable industry for years. But, according to a number of financial analysts, Verizon and T-Mobile might actually start cutting into the core revenues of cable companies like Comcast, Charter Communications, Cox Communications and Altice USA during 2022.

"This is the year. The recent deployment of large blocks of spectrum by wireless operators will enable them to offer viable home broadband service to a notable segment of the market," wrote the financial analysts at LightShed Partners in their 2022 outlook.

At issue are fixed wireless access (FWA) services, which promise to beam stationary Internet connections into homes and offices. And while FWA is nothing new  there are already roughly 7 million FWA users around the US  the new efforts by Verizon and T-Mobile appear poised to push the technology into the cable industry's core domain.

"We forecast that Verizon and T-Mobile will add 1.8 million wireless home broadband customers in 2022, more than doubling the 750,000 added in 2021," the LightShed analysts predicted. "To put that growth in context, Comcast, Charter and Altice combined added 2.4 million broadband subscribers in 2021 and 2.7 million in 2019. Investors expect these three cable companies to add more than 2 million broadband subs in 2022, but even that reduced level of growth from recent years may prove to be too aggressive."

Other analysts agree. "Fixed wireless probably cost Comcast and Charter, in aggregate, about 180,000 subscribers in the second half of 2021," wrote the financial analysts at Sanford C. Bernstein & Co. in a recent note to investors.

And they argued that this is just the start "The great risk ... seems to lie in late 2022 and 2023. As Verizon, T-Mobile and AT&T deploy initial and subsequent blocks of C-band spectrum and as T-Mobile expands its 2.5GHz coverage to the last 1/3rd of US households, the availability of fixed wireless should expand," they wrote. 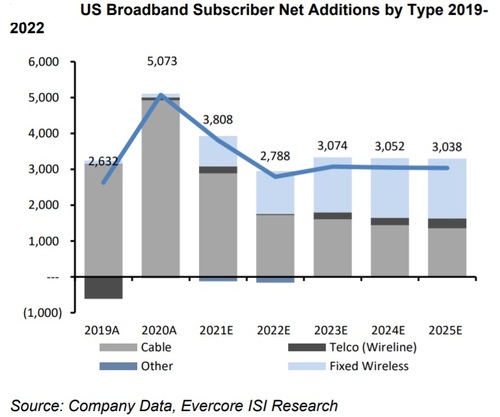 The financial analysts at Evercore predict that FWA services will gain a growing share of US broadband new subscriber additions. Click here for a larger version of this image.
(Source: Evercore)

At issue are a number of factors. First, Verizon and T-Mobile are in the midst of deploying significant amounts of new spectrum into their networks. The addition of C-band spectrum (for Verizon) and 2.5GHz spectrum (for T-Mobile) will give them far more network capacity. And that's important considering the average Internet household chews through almost 500GB per month, according to OpenVault. The average smartphone user, meanwhile, consumes just 12GB per month, according to Ericsson.

Second, Verizon and T-Mobile have finally shifted their FWA offerings from the test phase into the deployment phase. Although Verizon has been discussing FWA services for years, it finally started reporting actual customer numbers late last year (it ended the third quarter of 2021 with a total of 150,000 customers). Similarly, T-Mobile first outlined its FWA strategy in 2018, but officially launched its 5G FWA service in April  the company ended 2021 with 646,000 in-home Internet customers, well above its goal of 500,000. And both companies have recently cut FWA prices.

Finally, the cable industry appears to be in the early stages of what one financial analyst firm described as the "great deceleration." According to the analysts at MoffettNathanson, this cable industry slowdown stems from such factors as a decrease in the rate of new household formation, increased competition from fiber providers  and FWA. The analysts described the situation as a "concerning issue for cable investors, particularly if it appears that this is just a taste of what lies ahead."

But this isn't the first time that wireless executives have suggested that they pose a threat to cable network operators. For example, Verizon's previous CEO, Lowell McAdam, in 2016 discussed the opportunities around "wireless fiber" and how it might allow the company to compete against cable. (Verizon has since shifted focus from the millimeter wave spectrum that formed the basis of McAdam's promises.) And T-Mobile's previous CEO, John Legere, in 2017 wrote how the company planned to "disrupt legacy cable" with an innovative TV service. (T-Mobile quietly shut down the TVision Home service in 2020 that sprouted from Legere's promises.)

Whether 2022 will be different remains to be seen. But it's clear that FWA is quickly moving from a talking point to a financial line item, given the customer growth recorded by Verizon and T-Mobile in recent months.

Nonetheless, some analysts aren't too worried. "While we've seen some efforts by wireless operators to undercut fixed broadband pricing by offering discounts on home broadband (fiber or FWA) when combined with mobile, we believe it's easier for cable to compete in wireless than the other way around, since cable operators can offer wireless to their entire customer bases, while wireless operators can't economically offer FWA everywhere, and even wireless operators with sizable fiber footprints (AT&T and Verizon) still have the large bulk of their wireless customers outside their fixed footprints, and hence ineligible for converged pricing," wrote the financial analysts at Evercore in a recent note to investors.