Remember WiMax? The Intel-backed technology was a doomed attempt by the computer industry to break into the connectivity sector and build a 4G standard. It ultimately lost out to LTE, joining Betamax, the Sony Walkman and the Casanova-endorsed reusable contraceptive on the scrap heap of failed or obsolete innovations.

Now the computer industry is back with a WiMax successor. Disinclined to abandon that quizzical prefix, Intel Corp. (Nasdaq: INTC) calls this one WiGig. Facebook has gone with the more grounded Terragraph for the WiGig-based technology it is now busily promoting as an answer to the world's bandwidth problems. Is this like a phoenix rising from the ashes, or a putrid zombie back from the dead? (See Facebook Lauds Terragraph Cost Savings.)

WiGig/Terragraph technology is not based on WiMax, but the story is. Designed to work over extremely high frequency spectrum (the 60GHz range, specifically), it is mainly cast as a fiber substitute for places where a fiber rollout is uneconomical. It might also have a role to play as a "backhaul" technology in mobile infrastructure, providing connectivity between nodes and the core network. Stop me if you've heard this one before. 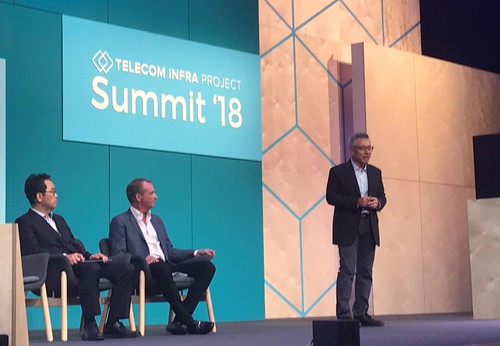 Facebook is desperate to make Terragraph a success, and have something to show for its connectivity efforts so far. Unsurprisingly, then, Terragraph was the focus of presentations lasting an entire morning at this week's two-day TIP Summit in London. But there is a massive disconnect. TIP (or the Telecom Infra Project, to give the initiative its full name) is an attempt to introduce the social media giant's principles of openness and sharing into a network equipment sector apparently dominated by a handful of restrictive, royalty-loving incumbents. Yet the likes of Intel, Nokia Corp. (NYSE: NOK) and (especially) Qualcomm Inc. (Nasdaq: QCOM), which are designing Terragraph equipment and were on stage in London, fit awkwardly into this communistic, royalty-free narrative. (See Qualcomm Blasts Apple for Disrupting Deals in Legal Dispute.)

In fairness to Terragraph, TIP is not really an open source initiative at all, a point often misunderstood in the mainstream press. In fact, only two of its 13 technical project groups are based on royalty-free principles. The others, including the millimeter wave group that champions Terragraph, allow licensing based on "reasonable and non-discriminatory" (RAND) terms. That all sounds jolly nice and equitable, but the same system is today used by the mainstream equipment market that TIP seeks to undermine. Royalty rates are falling, too. In August, Nokia put pressure on its rivals when it promised to cap its 5G licensing fees at 3 ($3.45) per device. (See TIP Players Voice Open Source Misgivings.)

Ah, but TIP is really about open approaches, say its advocates. You don't get to eat your rival's food without paying, but you do expect him to bring snacks to the party. This is exactly how the cellular standardization process is supposed to work, however. Indeed, 4G and 5G technologies are considered "standards" partly because they were designed in an "open," community-based way -- unlike, say, the proprietary stuff you would get from Sigfox, a French company developing network technology for the Internet of Things (IoT). (See French Toast? Sigfox on Skid Row.)

That makes it hard to see why Terragraph will necessarily be cheaper to deploy than a wireless technology developed outside TIP. Indeed, without the economies of scale that 5G will enjoy as a global standard, Terragraph could be expensive. While a 60GHz ecosystem is taking shape, and clearly features some big names, just a handful of operators are currently involved in Terragraph trials. The only operators not trialing 5G are companies about to quit mobile communications and head for a drown-your-sorrows, binge-drinking session at the nearest bar.

Terragraph enthusiasts point out that it works over unlicensed spectrum (meaning free but subject to interference). They also note that recent 5G spectrum auctions in Europe have cost operators dearly (meaning the Italian job). The problem with this argument is that heavy spending in these auctions has usually gone toward lower frequency bands. Of the 6.6 billion ($7.6 billion) that operators spent in Italy this month, just 164 million ($189 million) went on 26GHz spectrum, the band most likely to get used in a Terragraph-style setting. (See Italy's $7.6B 5G bonanza puts telcos on the rack.)

Even when spectrum is costlier, this rationale is dubious. The same logic was used to explain why Sigfox, which also uses unlicensed spectrum, would beat a low-power cellular standard designed for wide-area coverage. Yet the cellular NB-IoT standard now has more than 100 million global connections while Sigfox is aiming for just 6 million by the end of this year. (See China Mobile Sees NB-IoT Boom as Profits Rise.)

Moreover, just because 60GHz is unlicensed does not mean it is readily available or unregulated. Alex Choi, a senior vice president with Germany's Deutsche Telekom AG (NYSE: DT), says his company is reliant on a "temporary" 60GHz permit in Hungary, where it is carrying out trials. "We hope this constraint will go away in the near future," he says.

That is not the only obstacle, though. Yael Maguire, Facebook's engineering director, says brackets were developed to attach Terragraph equipment to poles. Customizing these for each specific deployment would have a major impact on costs at a global scale, he frets. Obtaining permits and access to passive infrastructure turned out to be "quite time consuming" in Hungary, says Choi.

As already noted, interference in unlicensed spectrum bands could be a concern. Another deployment challenge is rubbish propagation: Something as apparently innocuous as foliage could block a Terragraph signal, although 5G in high spectrum bands is likely to face the same problem.

Thinking about Facebook's target of extending broadband to lower income communities, the price of Terragraph nodes is obviously critical. The hope is that the .11ay eco-system at 60GHz will drive those costs right down. Even then you still need poles, power, permits, and to hope no one steals the equipment.

The other part not mentioned is the mesh capability and the ability to rapidly build wireless broadband networks in markets without deep fiber. That is a long-held dream and if it works as claimed in the trials, Terragraph could be a big deal.

The modeling tools, as noted in my quote in the article, look very useful. If you put very low cost nodes, mesh and modelling tools together, you have something  interesting. It's too soon to write-off Terragraph.The trial results indicate it is well-worth pursing to see how it plays out.

More generally, I'm pretty conflicted about Facebook's connectivity efforts. I admire the objectives and the ideas coming out of it are interesting. But I wonder if the premise to "do something different" will actually get the best outcomes, or if there's a bit of bloody-mindedness to it. Exhibit A: The drone thing.

Other things to think about include a) Facebook's long-term comitment b) What happens when the Facebook halo fades; and c) how sustainbale is a model where Facebook is a catalyst but other people take the risk of product development, deployment and operation.

Because of the halo around Facebook I've noticed people are unwilling to ask hard questions about these efforts -- certainly in public. I guess for fear of upsetting the company and the execs leading the effort. Your article is very welcome in that context. Facebook should value it.

On the other hand, we have billions of people on the planet without acceptably good network access, so anything that helps improve that has to be good. 5G development is tracking to favor wealthy, developed markets.