Comment (2)
Rancid meat
At best, this means 5G will be available to a higher percentage of Americans than Europeans for several years. Even that might change if infrastructure rivalry triggers a rollout race in the most competitive European markets. Telcos in the region are fond of grumbling about regulatory opposition to merger activity, arguing that too much competition leaves them short of funds for network investment. But France, Europe's most competitive infrastructure market, also has the best 4G and fiber networks in the region. (See French Telcos Gain on M&A Signals From Policy Wonks.)

Comparing mobile services in Europe with those in the US makes the latter's 5G "lead" seem even more like bluster. In its 2016 MobiNEX index, which measures countries and operators on the mobile customer experience, STL Partners ranked the US below a slew of European nations, including France, Germany, Italy, Spain and the UK. One very senior executive at a European telco, who did not wish to be quoted, launched into a tirade when asked about the European lag, complaining that mobile service quality and coverage are often appalling in the US. In this context, garnishing networks with a bit of 5G is like squirting hot sauce on rancid meat to hide the underlying flavor. 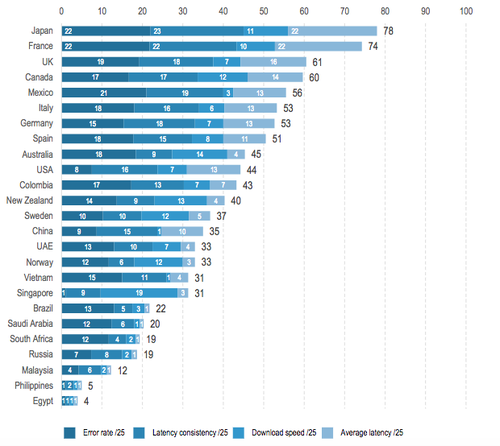 US customers also pay dearly for their unappetizing fare. The average revenue per user at AT&T's postpaid business was about $58 per month last year. In France, the average postpaid customer currently spends less than $25 on the haute cuisine served up by Orange. As noted, US prices seem unlikely to fall if a merger between T-Mobile US and Sprint goes ahead, leaving the US with just three big mobile network operators.

In the not-too-distant future, operators hope 5G will create new service possibilities in industrial markets. Providing connections between self-driving cars and street furniture is one much-hyped opportunity. Support for remote-control surgery is another. Such applications might eventually fuel economic growth and even boost operator revenues. But they are not what industry people are referring to when they talk of a US 5G lead. And there are doubts that some of these applications will ever see the light of day, at least where 5G is concerned. (See Does Ericsson's 5G-for-Healthcare Biz Case Need Surgery?)

If Europe is at risk of falling behind the US in the technology arena, it is not because of its telcos. Both Orange and Spain's Telefónica claim they spent a higher percentage of their revenues on research and development in the last two years than AT&T. Together, they invested about $2.7 billion in R&D over this period, compared with AT&T's $3.2 billion. Nor does Europe lack the vendors developing 5G technology. Ericsson AB (Nasdaq: ERIC) and Nokia Corp. (NYSE: NOK), two of the world's three largest network vendors, are European companies. China's Huawei, the biggest, is also highly active in Europe. Its innovation is unavailable to the main US service providers, by contrast, because of US government restrictions. (See US Ban on Huawei Would Trigger Turmoil in Telecom Industry.)

What Europe is missing are any homegrown technology giants to rival the US FAANGs (Facebook, Amazon, Apple, Netflix and Google) and the Chinese BATs (Baidu, Alibaba and Tencent). With a market capitalization totaling more than $4 trillion, these highly automated companies are the new oil tycoons, and visible in all walks of life. The products and services they provide have turned industries upside down and permanently changed the way people work, play and communicate. That Europe has not produced a single rival should perhaps be a greater concern for Europeans than anything to do with 5G.

James_B_Crawshaw 7/6/2018 | 3:36:32 PM
Country ranking of mobile experience Very surprising results in that study. France ahead of Singapore? I wouldn't have expected that. http://www.apteligent.com/white_paper/mobile-network-customer-experience-index-h1-2016/
Reply | Post Message | MESSAGES LIST | START A BOARD

DanJones 7/6/2018 | 1:35:50 PM
VZ not T-Mobile! AT&T and Verizon are the 2 US carriers really pushing 5G timelines not T-Mobile. For T-Mobile, we can expect limited commercial service in 2019, with full rollout push in 2020 (depending on merger). Not really much different from the Europeans actually.
Reply | Post Message | MESSAGES LIST | START A BOARD
EDUCATIONAL RESOURCES