Comment (1)
The high life and the slums
But other telcos are more upfront. Norway's Telenor Group (Nasdaq: TELN), for instance, told analysts at the start of the year that automation and digitization would claim around one fifth of jobs by the end of 2020. If it is bolder than other European operators, it may also have the moral high ground as a fallback. CEO Sigve Brekke took a pay increase of just 1.6% last year, even though the company's share price rose by a third in Oslo. (A 16% increase in per-employee wages at Telenor was probably triggered by the divestment of a large, low-cost business in India.) (See Downsizing Telenor Pins Margin Hopes on Automation.)

Elsewhere, sharp increases in CEO compensation shine an uncomfortable spotlight on operators that are slashing jobs, especially given their lackluster performance. The most egregious example is BT. Patterson's compensation rose nearly three quarters, compared with a 3% increase in wages per employee, despite a raft of disappointing metrics. Sales fell 1%, adjusted earnings before interest, tax, depreciation and amortization (EBITDA) were down about 2% and BT's adjusted EBITDA margin of 31.6% was 0.2 percentage points lower than in the previous year. BT's share price fell 28% in London in the recent fiscal year. (See BT's Patterson Gets Tasty CEO Bonus as Troops Suffer.) 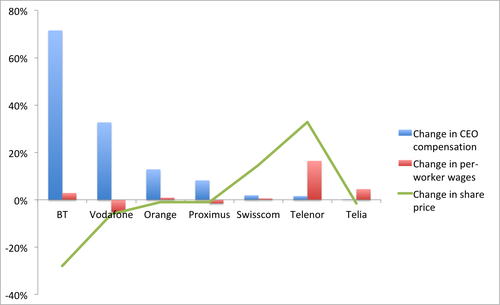 A sharp pay rise for Vittorio Colao, Vodafone's departing CEO, may also be hard to justify to investors as well as the wider world. Shareholders may have been encouraged by a 4.2% increase in adjusted EBITDA, as Vodafone slashed jobs and completed a merger in the Netherlands. But reported revenues fell 2.2% and Vodafone's share price was down 6%. Wages per employee dropped 5% following the divestment of the relatively high-cost Vodafone Netherlands business, now merged with Liberty Global's Dutch unit. (See Vodafone Rewards Top Brass as Thousands of Staff Are Axed.)

Any CEO will expect to earn more if he meets targets and satisfies investors. Yet of the 12 operators examined, share prices rose for only KPN, Telenor and Swisscom in the recent fiscal year. Reported revenues fell at seven of the companies, and the median increase in the EBITDA margin was only 0.3 percentage points, despite staff cuts. Outside the investment community, public anger at fat cat pay is likely to spill over as automation squeezes people out of work.

Many governments, alarmingly, have yet to face up to the coming upheaval. Talk of a basic income guarantee is often derided as left-wing nonsense when it merits serious attention. The UK's House of Lords, an anachronistic and undemocratic institution, decided in April that fears surrounding artificial intelligence were "out of kilter with reality," a phrase that made Light Reading wonder if they were really passing judgment on themselves. (See UK Dinosaurs Decide AI Does Not Threaten Extinction.)

For all the latest news on automation, check out our dedicated content channel here on Light Reading.

Instead, it is left to the operators to warn authorities about the looming storm. Perhaps conscious of the ethical dilemma that surrounds automation, Spain's Telefónica this week urged governments to "provide adequate education and training to ensure the right to employment of individuals facing the risk of automation of many jobs as a result of the strength of the Internet of Things and artificial intelligence." (See Eurobites: VEON Trials NB-IoT With Ericsson in Moscow.)

While Patterson and Colao figure out how to spend their extra millions, Telefónica's message is one that policymakers everywhere should be giving their full attention.

A note on methodology: Light Reading used company data for wages and salaries, where available, and divided this by headcount to arrive at per-employee figures. In most cases, headcount data is for the end of the fiscal year, which may skew calculations when layoffs have occurred late in the fiscal year. The CEO pay figures include basic salaries as well as bonuses and other benefits.

For share price movements, Light Reading typically used the stock exchange or index in the country where an operator is based. The exception was VEON, which is based in Amsterdam but reports in US dollars. In that case, share price information was taken from the US Nasdaq.

Details of net income were not considered for the purposes of this story because wild swings in these figures do not always reflect underlying operational performance.