ZTE is on the up, but challenges remain

Less than two years after it looked set to collapse, China's ZTE has pulled off a remarkable turnaround.

Full-year results for 2019 published today show the Chinese equipment vendor swung to a net profit of more than 5.1 billion Chinese yuan ($720 million), after racking up a huge loss of nearly RMB7 billion ($990 million) in 2018.

Back then, ZTE was reeling from the impact of hefty US fines and a trade ban that stopped it from acquiring US components, essential for many of its products. Those measures came after it was charged with violating US sanctions against Iran and North Korea by selling them equipment that included US technologies. Clobbered financially and unable to buy vital equipment, ZTE was on life support.

But last year its networks business grew at a faster rate than comparable units at either Sweden's Ericsson or Finland's Nokia. Total operating revenues were up 6.1%, to RMB90.7 billion ($12.7 billion), and the unit that serves carriers reported a 16.7% increase, to RMB66.6 billion ($9.4 billion). That compares with a 12% increase Ericsson managed at its networks business (thanks partly to one-offs and currency movements) and 5% growth at Nokia's equivalent unit.

No doubt, ZTE has been and continues to be one of the major beneficiaries of China's investment program. Along with Huawei, its larger Chinese rival, it plays a far bigger role in the construction of China's 5G networks and supporting infrastructure than any Western firm. That's important because of China's enormity: Ericsson CEO Börje Ekholm has estimated the country accounts for about 60% of the entire global 4G market.

Nor was any US campaign against ZTE likely to threaten its relationships with African operators and in various other low-income markets. On the geopolitical stage, China's superpower influence in many African countries is now unmatched: Replacing Chinese companies would be a difficult task for many of the region's service providers.

More impressive is that ZTE has managed to retain and nurture relationships with some important Western customers. France's Orange, for instance, signed a 5G contract with ZTE last year for a Spanish rollout and holds the Chinese vendor's products in high regard. "It has very good technology and quality, even in [5G] standalone mode, with very good results," said Arnaud Vamparys, Orange's senior vice president of radio networks, in a recent discussion with Light Reading. 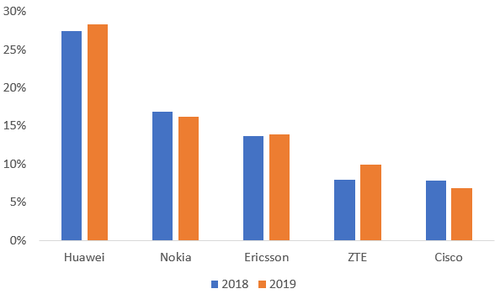 The improvement in revenues reflects an increase in ZTE's market share. Last year, the Chinese vendor recorded a larger gain than any of its chief rivals, growing its share of total telecom equipment revenues worldwide by 1.9 percentage points, according to market-research firm Dell'Oro. It now accounts for a tenth of total spending, putting it behind Huawei, Ericsson and Nokia but ahead of Cisco.

But the news is not all good. For one thing, ZTE remains smaller from a sales perspective than it did back in 2017, when its revenues were about a fifth higher than last year's. Either it has lost some of the business it was doing three years ago, or it has been forced to offer heavy discounts to its customers.

Moreover, while its networks division grew last year, its devices business reported a sharp decline, with revenues down nearly 22%, to around RMB15 billion ($2.1 billion). Sales to government and corporate customers were roughly the same, at about RMB9.2 billion ($1.3 billion).

While ZTE has not incurred recent fines, the improvement in profitability hints at some hefty cost cutting in the last couple of years. Until it publishes its annual report later this year, any details about staff numbers for 2019 remain unavailable, but ZTE cut about 6,500 jobs in 2018, finishing that year with 68,240 employees overall. Last year, its gross margin rose to 35.1%, from 31.4% in 2018, according to figures published today.

Despite the cuts, ZTE increased its spending on research and development to about RMB12.5 billion ($1.8 billion) last year, from RMB10.9 billion ($1.5 billion) in 2018, and it remains competitive with bigger firms, judging by its market share gains and the comments made by Orange's Vamparys.

A clear danger is the possibility of further action by the US government. Earlier this month, the US Department of Justice was reported to have opened a new investigation into ZTE over allegations that it bribed foreign officials to gain advantages. At the time, ZTE said it was ignorant of any such investigation.

Whatever comes of those reports, the US may be running short of weapons to use against the Chinese firm. Much like Huawei, ZTE has been trying to become more self-reliant and find alternatives to US suppliers, according to sources at the company. And the US can do nothing about China's importance in the telecom infrastructure market. With China's service providers now doling out multi-billion-dollar 5G contracts, ZTE can perhaps afford to be optimistic.