You've got to hand it to Masayoshi Son, the eccentric billionaire CEO of SoftBank Group (SBG). Shot down in Q4 2019, now riding high in Q1 2020.

SBG fiscal Q1 net income, attributable to owners of the parent, was 1.25 trillion Japanese yen (US$11.7 billion). The previous quarter, SBG shareholders had to stomach a net loss of JPY1.4 trillion ($13.1 billion). 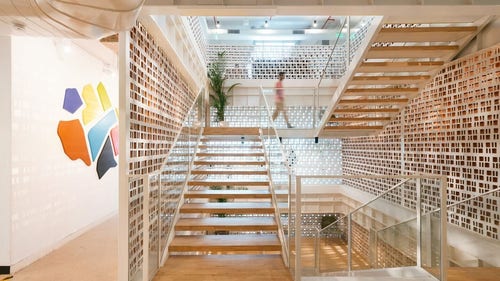 WeCrashed: Masayoshi Son is steering away from startups after the WeWork debacle - revalued at $2.9bn down from a pre-IPO valuation of $47bn. (Source: WeWork)

The days of making huge punts on young tech companies with little in the way of product  at least for now  seem to be over.

The new-look Son spoke about being "cautious" and "conservative," and that "SGB 2.0" had transformed into an "investment company."

Under new asset management
Son's greater attention to the balance sheet is best illustrated by the swift and near-completion of SBG's massive asset sale and monetization program, started in March, to raise JPY4.5 trillion ($42.1 billion).

This gives the group much more scope to whittle down debt through bond buybacks.

Share buybacks and increasing cash reserves are other SBG priorities from the program. It's a strategy that has helped SBG share price soar in recent months.

Partial sale of SBG shares in T-Mobile USA raked in a sizable $22.4 billion. Sale of shares in e-commerce giant Alibaba saw monetization to the tune of $14.7 billion.

SBG said JPY4.3 trillion ($40.2 billion) of assets were either sold or monetized, as of August 3.

Rumors that SBG is looking to get a return on UK chip designer Arm, bought by SoftBank for a hefty $32 billion in 2016, are not going away either.

The Group is reportedly in advanced discussions to sell Arm to Nvidia, a US manufacturer of graphical processing units.

Another Son-backed fund
Son's penchant for setting up new investments has not abated, however. He announced a new investment management subsidiary  armed with $550 million  owned 67% by SBG and the remainder by Son.

But it's a far cry from the Vision Fund ethos. Rather than splattering cash at a slew of startups, money will be invested in established tech giants, such as Facebook and Amazon.