When it comes to semiconductor manufacturing, it's a contest between Samsung and TSMC.

The two firms have just have unveiled plans to invest a total of $130 billion, accounting for 43% of all semiconductor capital investment, according to research firm IC Insights. Tellingly, it's the highest proportion ever by the top two firms in the sector.

Samsung has been the biggest investor in chip manufacturing for the past decade, taking over from Intel, the leader going back to the early 1990s.

Intel has just unveiled a $20 billion plan to build two new plants in Arizona, but Samsung and TSMC are on a different level.

TSMC will tip in a record $100 billion over the next three years to expand capacity to meet the huge surge in global demand. The company said it expected "megatrends" of 5G and high-performance computing would ensure strong semiconductor demand in the next several years.

Samsung is planning to spend approximately 35 trillion won (US$31 billion) this year, the biggest portion going to its main Pyeongtaek site near Seoul, although it will also invest in plants in Xi'an and Austin, Texas.

This plunge by the two Asian firms is not good news for those with aspirations to industry leadership.

Maintaining a lead in chip technology "has become increasingly expensive over the past 25 years," IC Insights said.

The investment required to implement the most advanced manufacturing processes had driven out all but three companies  Samsung, TSMC and Intel  from the top end of the market, it said.

Of these, only Samsung and TSMC could "truly be considered to be at the leading edge" in volume production of the most advanced processes, 7nm and 5nm. Intel is not expected to reach high volume 7nm production until 2022, by which time Samsung and TSMC will have moved onto 3nm.

The research firm says any country that sought global leadership would need to spend "at least $30 billion per year for a minimum of five years to have any reasonable chance of success."

But Chinese economic planners know that it requires more than mere cash to become a frontrunner. 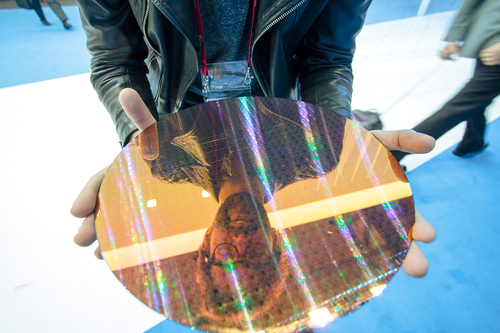 Even before the US sanctions on chips and manufacturing technology, Beijing had tipped tens of billions into efforts to create national champions.

Despite that, China remains heavily dependent on foreign technology, importing more than $300 billion in semiconductors annually, while its own industry accounts for just 10% of global foundry plant.

Since the US sanctions began, Chinese investment into the semiconductor industry has skyrocketed, with investors last year tipping 228 billion yuan ($34.7 billion) into the sector, up 407%.

But the fundamental problem for challengers is that the chip sector is structurally an industry that favors incumbents. For example, Nvidia created the graphics processing segment in 1999 and has never relinquished its lead.

In the mid-90s, the top two companies accounted for as little as 13% of total capital investment, less than a third of the level today, IC Insight points out.

If there is to be a changing of the guard in the chip sector, it won't be any time soon.