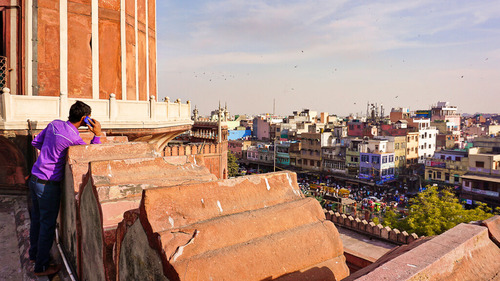 Going down: Both Bharti Airtel and Jio saw revenue per user fall in the past quarter.
(Source: Cyprian Hauser on Flickr, CC2.0)

This drop in ARPU comes after the Telecom Regulatory Authority of India eliminated Interconnection Usage Charges (IUC) from January this year.

Jio added 15.4 million new subscribers, while Airtel added 14.1 million (including 13.7 million 4G subscribers) in the March quarter. However, Jio's additions also include its home broadband subscribers, which is not the case for Airtel.

The relaunch of the JioPhone earlier this year has helped Jio gather some momentum where subscriber addition is concerned. The upcoming launch of a low-cost smartphone is further likely to help Jio gain more subscribers.

The most significant development for Airtel is the growth of its home connectivity business, which has reported the highest sales in the past three years. It recorded the highest ever number of new customers  274,000, to reach 3.07 million.

"The company has also been rapidly expanding its reach to non-wired LCO partnership model, which is now live in more than 200 cities," says the Airtel press release.

Jio's fixed broadband numbers were not revealed separately by the telco.

Both Airtel and Jio highlighted the challenges of operating during the ongoing second wave of the COVID-19 pandemic, which has led to lockdown in several regions in the country.

This has made it challenging for service providers to ensure connectivity in all regions. For users, it has become a challenge to recharge phones. More than 90% of wireless subscribers in India are prepaid customers.

"We doubled down on several alternative channels  pharmacies, groceries, Bank ATMs and post offices and enabled recharges at points that continue to be available during the lockdown," says the Airtel press release.

The company encouraged its customers to use digital channels, and also undertook campaigns to educate users to pay or recharge online.

"Jio has ensured zero impact on the network despite minimum staff and COVID related restrictions due to high degree of automation and network virtualization," says the press note.

It also worked to improve customer outreach to ensure continuity of recharge and services. The ongoing quarter results will reveal the full impact of the pandemic on both service providers.