Huawei is slowly being strangled

Back on a results conference call from Shenzhen for the first time in four years, after her "detention" at a palatial residence in Vancouver, Huawei's Meng Wanzhou appeared far chipper than the company she helps to manage as chief financial officer. The Chinese equipment giant, which previously bulldozed rivals in international markets, looks decidedly un-chipper  nay, chip-less. Cut off from the semiconductors it needs by US sanctions, Huawei has sought salvation in software. Today's update proves its strategy is failing.

The results are appalling, whatever Huawei says. Meng talked up efficiency improvements, but profits rose only because sanctions forced Huawei to sell its Honor smartphone unit (now on a tear) and a server business that could no longer buy x86 chips. Proceeds were booked as "other income," a figure that rocketed 8,686% last year, to 60.8 billion yuan (US$9.5 billion), and went straight into operating profit. Even after the usual extravagant outlay on research and development (R&D)  which, at nearly RMB143 billion ($22.4 billion), equaled a monstrous 22.4% of sales  net profit was higher. But nothing "organic" was good. 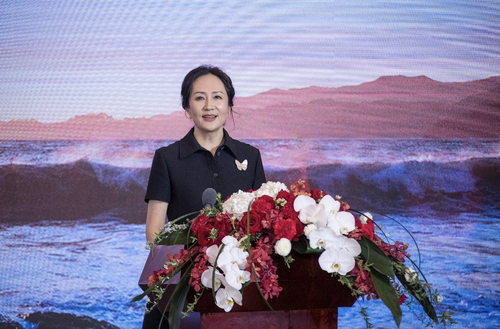 Huawei's Meng Wanzhou was back on home soil for the latest update.
(Source: Huawei)

The 50% drop in device sales was expected. Guo Ping, one of Huawei's rotating chairmen, explained why the smartphone unit has suffered so much worse than other divisions in a rare moment of total transparency. Huawei needed a baseband chip for every one of the 120 million smartphones it sold in 2019, he told a Wall Street Journal reporter posing questions. Each 5G basestation also needs its own baseband chip, said Guo, but only a million of those were shipped the same year.

The shocker, then, was that sales to telecom operators fell as much as they did  by 7% last year when rivals reported growth. The industry tends to assume Huawei does not have to worry about its unpopularity outside authoritarian regimes because China is such a vast and lucrative market. Unfortunately, it seems, some earlier high-speed feasting on Huawei products means China's appetite for 5G basestations is practically sated. "The 5G construction in China was completed in 2020 and therefore customer demands are not that high," acknowledged Meng.

These consumer and carrier units together account for 82% of revenues, and all the software expertise in the world will not save them  purely because they are mainly hardware businesses. Stuck with less sophisticated chips, Huawei has argued it can overcome its limitations through software advances, and thereby remain competitive. But this assumes innovation is in deep freeze everywhere else. The best products will be a blend of high-end chips and brilliant software, not reliant on one or the other.

R&D funds are being consumed in three areas  fundamental science, system architecture and software  and Huawei is not about to turn chipmaker. This year, moreover, it is unlikely to book the same RMB57.4 billion ($9 billion) gain from asset sales it recognized for 2021. To maintain its R&D budget without that increase, it would have had to shoulder a 13% drop in net profit.

Without an end to US sanctions, access to high-end chips will come only via domestic fabs like SMIC. But it will probably be years before SMIC and other Chinese foundries have the tools they need to compete against Taiwan's TSMC and South Korea's Samsung, say experts. One of the most important missing ingredients is the extreme ultraviolet lithography equipment used to imprint electronic circuits on silicon wafers. ASML, a Dutch company, currently enjoys a monopoly there, and its own government has denied it an export license to serve SMIC.

Not so enterprising after all

All this seems to leave Huawei staring at its small enterprise unit as a potential engine of growth. Sales were up an impressive 23% in 2020 as Huawei sashayed into new market opportunities. But all the vigor had disappeared by 2021, when the revenue growth rate was a disappointing 2.1%. Strip out the cloud and sales fell 3.5%, to RMB82.3 billion ($12.9 billion).

What's more, for all the bullish rhetoric about that cloud business, its revenue contribution of RMB20.1 billion ($3.2 billion) last year  while a 34% increase on the 2020 figure  looks wimpy alongside the $62 billion generated by AWS, the public cloud market leader. Guo insisted Huawei is the fifth-biggest cloud worldwide, which is merely evidence of the gulf between the big players and everyone else. Unable to procure x86 server chips for its cloud business, Huawei is bashing out its own Kunpeng processors based on Arm architecture. In other words, it depends on the blueprints it buys from a company based in the UK, whose Huawei strategy is rather like China's approach to COVID-19.

The axis of autocracies forming between China and Russia could bring additional pain for Huawei in European countries where it still holds influence, such as Germany. Angela Merkel, Germany's former chancellor, had no problem buying gas from Putin. Olaf Scholz, her successor, clearly does now that Putin is bombing Ukraine. As Chinese companies including Huawei continue to serve that regime, Scholz will find it harder to justify retaining Huawei products in Germany.

"We have noticed that countries have issued policies but those are complex and constantly changing so we are carefully evaluating those policies," said Guo on today's call, when asked about Huawei's position on that conflict. Hacker attempts to bring down Russia's Internet have reportedly failed thanks to Huawei's support for Russia.

Huawei likes using colorful metaphors to describe its predicament. It previously compared itself with a fighter jet taking flak. A slide in today's presentation appeared to show a climber in peril on snowy peaks. But a better analogy is of someone being slowly strangled by Western hands while China  helpless for now  looks on. Software might provide enough oxygen to keep Huawei alive but incapacitated. For a resurgence, it will need a lot more.

Like what we have to say? Click here to sign up to our daily newsletter
COMMENTS
Newest First | Oldest First | Threaded View
Add Comment
Be the first to post a comment regarding this story.
EDUCATIONAL RESOURCES
sponsor supplied content
Why IMS Needs to be "Any Cloud-Native"
5G: The Race Cant Be Won Without The Crew Onboard
Digital Marketplace: The New Telecom Frontier
Network Optimization: Non-Real-Time RIC Trial Analysis
Vendor Interoperability with Service-Based Architecture
The Outlook for Open vRAN
QCT Introduces New Innovative Family of Edge Servers for the Telco Marketplace.
QCT CU/DU Solutions to Optimize Open RAN Deployments
End-to-End Enterprise 5G Solutions Powered by QCT
New Innovative Family of Edge Servers for the Telco Marketplace
Educational Resources Archive
More Blogs from Morris Lore
Rakuten takes aim at VMware, and it's not the only threat