Foxconn has revealed its concept electric vehicles that it plans to build for other companies, in a brilliantly unsubtle ploy to make the self-driving Apple Car.

At its headquarters in Taipei, the company unveiled its sports utility vehicle and sedan models. It already is the biggest assembler of iPhones, and is making a concerted push to eke out a similar role with Apple's car. 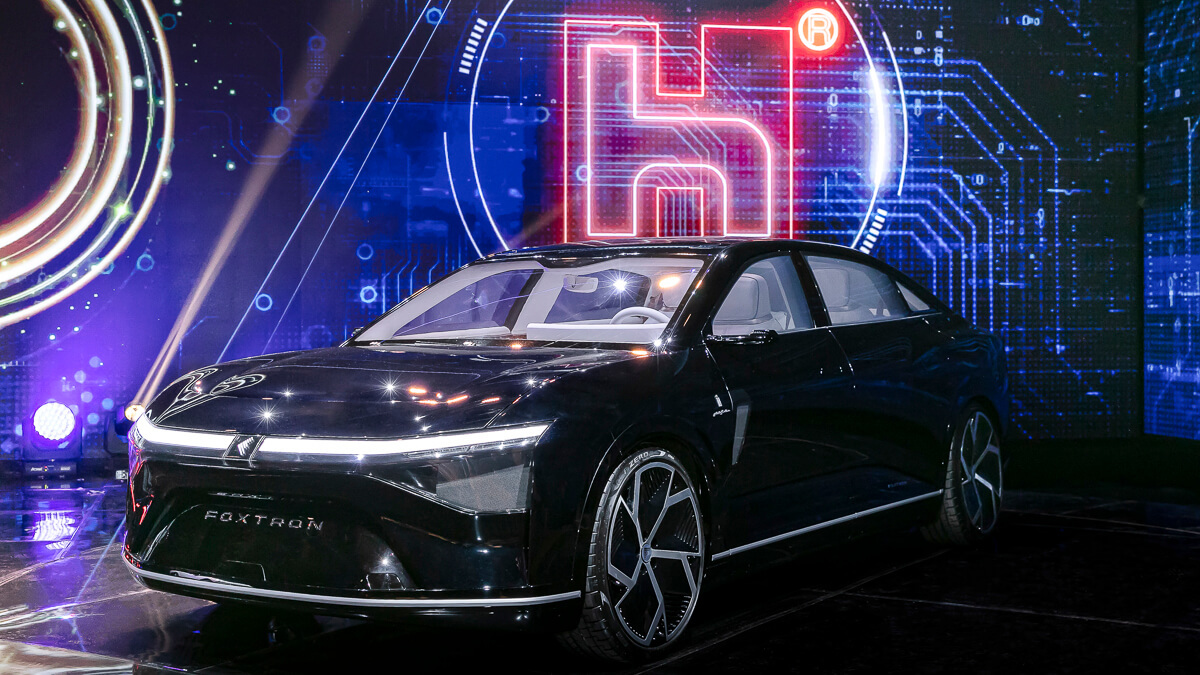 New car smell: The Foxtron Model E is one of three concept cars unveiled by Foxconn, as the vie to make the Apple car.
(Source: Foxconn)

In September, it purchased an Ohio automotive factory from the faintly struggling US electric vehicle startup Lordstown Motors, for $280 million, as part of its efforts to boost its electric vehicle supply chain. It is meanwhile closely eyeing a similar purchase soon in Europe. And buying a chip plant in Taiwan in August for $90.8 million was also aimed at bolstering Foxconn's auto chips supply chain.

Apple accounts for roughly half of Foxconn's sales, but there's no reason, speculates the company, that couldn't go up further. For now, it will make electric cars for Taiwan's Yulon Motor Company, while it angles for bigger things.

The company also will make an electric bus for a Taiwanese transport provider. Starting next April, it's hoping to start mass producing an electric pickup, the Lordstown Endurance out of Ohio.

Apple has sought to make an Apple Car since 2014, but awkwardly, lost the head of its car project, Doug Field, in September. The former vice president of special projects instead opted to go to Ford, where he took over the role of chief advanced technology and embedded systems officer.

It is a defection that will have stung in Cupertino. Up until 2018, Field was at Tesla, where he was a leading figure in the launch of the company's Model 3. Added to that, Apple has seen three other high-ranking executives in its automotive project leave this year.

Benjamin Lyon, one of so-called Project Titan's founders, left in February for a rocket start-up called Astra. Ex-Googler Jaime Waydo, who headed up the project's autonomous driving group, left for Cavnue, a start up working in connected roads. And its robotics head, Dave Scott, decided in May to take over Hyperfine, a medical device group.

Foxconn has made bits of progress in building up its automaking chops. Since announcing in November 2019 it was wading into the space, it has embarked in spurts of dealmaking. So far it has struck a manufacturing deal with the US electric vehicle company Fisker (which is aiming to make an all-electric SUV from recycled and vegan materials, called the Fisker Ocean).

The company has partnered with Thailand's PT, a state-owned oil and gas company. And it's struck deals with Dutch-based electric vehicle maker Stellantis NV and China's carmaker Geely. But at the same time, it hasn't quite sold any electric vehicles yet. Volkswagen, Hyundai and obviously Tesla have meanwhile been churning them out. This is something Foxconn is aiming quickly to change.

The SUV will start sales in Taiwan in 2023, under a Yulon branding. And a non-Taiwanese carmaker will sell the sedan, intimates the company.

For its part, Foxconn is angling for a self-set target to provide components or services for 10% of the globe's electric vehicles by between 2025 and 2027. In looking to other carmaker partners, Apple has been rebuffed by worries those companies would just turn into the Foxconn of the auto industry.

So in the end, the Foxconn of the car sector may just end up being Foxconn.