As Ericsson advances, Nokia's 5G business may be finished in China

Is it "le fin" for the Finns in China?

The award of huge 5G contracts by China's big three service providers has left Nokia empty-handed months after the Finnish firm warned of growing Chinese support for domestic vendors. Deals reportedly worth nearly $10 billion have been dished out by China Mobile, China Telecom and China Unicom in the last few weeks. Nokia scraped not even a cent.

Chinese partiality has not worked out quite so badly for Ericsson, the other big Western vendor. After landing a contract with Mobile worth about $593 million (at today's exchange rate), the Swedish company at the weekend reportedly picked up a double-digit share of a massive 5G tender issued by Telecom and Unicom, which are jointly building a 5G network. Analysts have put the overall value of this tender at around $4.6 billion. Ericsson seems to have walked off with deals worth at least $460 million.

The outcome seems to reflect the different mobile fortunes of the Nordic vendors. Ericsson has looked resurgent in the last year or so, building market share by replacing either Nokia or China's Huawei as an equipment supplier in telco networks. Under CEO Börje Ekholm, it has sold various non-mobile assets and focused its research-and-development budget on 5G technology. 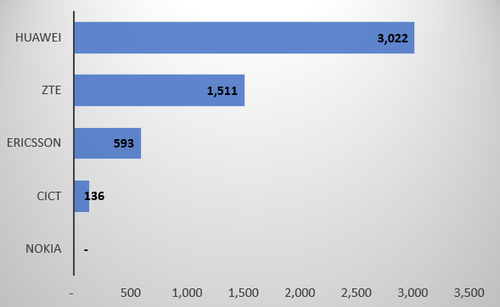 The strategy seems to have paid off. China has long rigged its telecom market in favor of domestic firms, leaving Ericsson with just a tenth of the market, according to Ekholm's own estimate. A Viking excursion designed to increase that share seemed at risk of being caught in the trade crossfire between China and the US. Yet with 11.5% of the Mobile tender, and a double-digit share of the Telecom and Unicom work, Ericsson appears to have advanced.

"We are quite proud of that achievement, particularly considering we are the only non-Chinese vendor that got market share," said Fredrik Jejdling, Ericsson's head of networks, in discussing the 5G deal with Mobile before news surfaced of the Telecom and Unicom work. "It is 11.5% and that is multiplied by a high number of basestations in the total market to provide quite a significant amount of volume."

In comparison, Nokia's mobile situation looks bleak. Last year, the Finnish company alerted investors to 5G product difficulties that have torn into profit margins and upset financial targets. It was admittedly distracted by the integration of the Alcatel-Lucent business it bought in 2016. Initially, it made a poor choice to use more expensive, programmable components in its 5G products, hoping these would appeal to customers. Blame has also been attached to hold-ups at an important supplier, with several analysts identifying Intel as the culprit.

Did Nokia's 5G problems drive Chinese operators toward other suppliers? Pressure on gross margins, blamed largely on its costly 5G components, will certainly have given Nokia less wiggle room on price during negotiations. But the Alcatel-Lucent merger may also have put Nokia in an awkward position, boosting its market share to a level that made Chinese authorities uncomfortable, according to one industry expert who previously spoke with Light Reading on condition of anonymity. "Since foreigners should not have too high market share, it is likely that the other vendors will gain at the expense of Nokia," he said last year.

Fixing the 5G mess is now consuming Nokia's time and resources, and the China disaster will make that task even harder. Nokia's 5G mobile business in China remains an aspiration, and the firm now lacks a lucrative source of revenue it could have partly reinvested in product improvements. In July 2019, during an interview with Light Reading, Kristian Pullola, Nokia's chief financial officer, warned of a possible retreat from China sparked by growing support for homegrown suppliers. Nokia's commitment to China is likely to be a talking point when it publishes quarterly results later this week.

The optics look good
But if it's down in 5G mobile, Nokia has everything to play for as China's only western provider of fiber and copper network products. Given the increase in Ericsson's market share, Nokia may have been snubbed largely for reasons of product competitiveness rather than geopolitics. Still highly regarded for its expertise in core, fixed and transport technologies, it will be desperate to make up for its 5G loss in these areas. Discussing China ambitions in its 2019 annual filing with the Securities and Exchange Commission, Nokia said it would be "prudent in 5G, while targeting more attractive opportunities with communications service providers in other parts of our business, such as core, routing, transport, fixed access and LTE, as well as with enterprise and webscale customers."

Halting the decay is a priority for Nokia, whose Chinese business was on the slide even before 5G contract awards. Last year, revenues from China fell 15%, to about 1.8 billion ($2 billion). While that is still more than Ericsson, the gap is shrinking. The Swedish firm reported growth in China sales of about 8% in 2019, to just less than 15.8 billion Swedish kronor ($1.6 billion). After this week's updates, Ericsson and Nokia may be on course to trade places.

Unfortunately, the China 5G upset at least temporarily shuts Nokia out of what may be the fastest-growing part of the infrastructure market this year. Claiming to have made a full recovery from COVID-19, China is prioritizing investment in 5G mobile technology and targeting the rollout of about half a million 5G basestations by the end of 2020. Still-suffering Europe faces 5G delays, according to Ericsson and Huawei. And US operators will struggle to maintain spending as unemployment soars.

Aside from any supply chain constraints, perhaps the biggest risk to Ericsson is on profitability. The Swedish firm has repeatedly had to warn investors that its 5G landgrab could nibble into margins, as it offers generous deals to secure projects deemed strategically important. So far, though, it has been able to protect margins through cutbacks without hurting its competitiveness. Nokia's ailments have undoubtedly helped.

Like what we have to say? Click here to sign up to our daily newsletter
COMMENTS
Newest First | Oldest First | Threaded View
Add Comment
Be the first to post a comment regarding this story.
EDUCATIONAL RESOURCES
sponsor supplied content
Why IMS Needs to be "Any Cloud-Native"
5G: The Race Cant Be Won Without The Crew Onboard
Digital Marketplace: The New Telecom Frontier
Network Optimization: Non-Real-Time RIC Trial Analysis
Vendor Interoperability with Service-Based Architecture
The Outlook for Open vRAN
QCT Introduces New Innovative Family of Edge Servers for the Telco Marketplace.
QCT CU/DU Solutions to Optimize Open RAN Deployments
End-to-End Enterprise 5G Solutions Powered by QCT
New Innovative Family of Edge Servers for the Telco Marketplace
Educational Resources Archive
More Blogs from Morris Lore
Public cloud holds perils, and don't expect an 'open' RAN with it