China's ZTE Regenerating, but Still Smaller Than It Was

China's ZTE generates smaller sales than it did three years ago despite more than quadrupling its net profit for the recent third quarter after last year's results were decimated by the impact of US trade sanctions.

Sales for the first nine months of this year were up 9.3% year-on-year, to about 64.2 billion Chinese yuan ($9.1 billion), but down from the RMB71.6 billion ($10.1 billion) that ZTE generated in the same period of 2016. After Huawei reported its own 24% year-on-year sales increase for the first three quarters, the gulf between the two Chinese players has grown, with ZTE now just one tenth as big as Huawei in revenue terms.

Using today's exchange rates, ZTE generated about half as much in sales as Nokia over the first nine months and about 55% as much as Ericsson. ZTE would look even smaller next to its European rivals after the removal of revenues it generates from the sale of consumer devices, which the networks-focused Nordic companies have not manufactured in years.

Even so, the bottom-line recovery leaves ZTE looking much heathier than it did last year, with net profit up 157% for the first nine months, to about RMB4.1 billion ($580 million), and showing a 371% improvement for the recent third quarter, to roughly RMB2.7 billion ($380 million).

ZTE was laid low when US authorities last year banned it from acquiring any US components. The company had previously been fined for breaching US trade sanctions against Iran and North Korea and was permitted to resume trade with US component makers only after agreeing to pay another $1 billion fine, make management changes and be supervised more rigorously by US authorities.

Because ZTE is so heavily reliant on US components, the ban nearly drove it out of business, while the fines wiped out any company profits.

ZTE has tried to remain competitive this year by pumping a higher percentage of revenues into research and development activities. It claims to have spent 14.6% of revenues on R&D during the first nine months, up from 13% over the whole of 2018 and just 10% back in 2014.

While that figure compares favorably with the 14.1% of sales that Huawei spent on R&D last year, ZTE still looks like a relative R&D weakling next to its main competitors. Last year, it invested just $1.5 billion in R&D, compared with Huawei's $14.4 billion, Nokia's $5.1 billion and Ericsson's $4 billion. 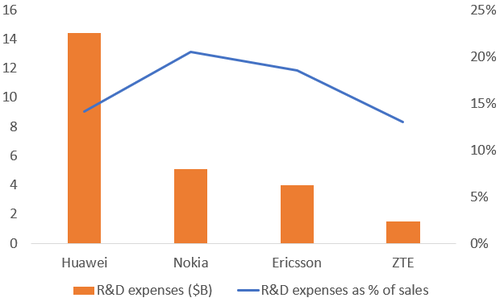 Whether there has been an uptick in staff numbers this year is unclear, but the rather lackluster sales performance came despite ZTE's trumpeting of 35 commercial 5G contracts.

The company looks set for a boost in the Chinese market, where operators are due to award major 5G contracts in the next few months. As one of China's homegrown vendors, ZTE is guaranteed a much bigger share of business than foreign competitors.

Elsewhere, ZTE remains a force in parts of Africa where the Chinese government and Chinese investors have become increasingly influential in recent years. In other parts of the world, it has also been a popular choice with cost-conscious operators serving low-income segments of the population.

But Italy's Wind Tre, a high-profile European customer, altered course when ZTE was hit with the US components ban, introducing Ericsson as a second supplier and blaming ZTE's difficulties for subscriber losses at its own business. At the time, other European customers were understood to be closely monitoring ZTE for any signs of further problems.