As a chamber of unelected peers who sit in judgement on UK government policy, the House of Lords has long seemed undemocratic and anachronistic to its opponents. But when those peers used the phrase "out of kilter with reality" in a report they published this week, they were not referring to themselves. Instead, this was their verdict on the "hopes and fears presently associated with AI [artificial intelligence]." In massively downplaying the potential AI threat to jobs, that verdict could make the House of Lords appear even more detached from reality.

Nevertheless, the UK's Lords are not the only ones who see no real cause for concern. Responding to the publication of their report, Israel's Amdocs, which sells IT systems to network operators, has weighed in with its own upbeat take on AI. The loss of jobs to automation "is likely to be balanced out by the creation of new jobs," said the company in a statement. "The introduction of AI will also help drive efficiencies in business, freeing up workers to do more productive tasks."

Tyrannosaurs in Their Natural Habitat 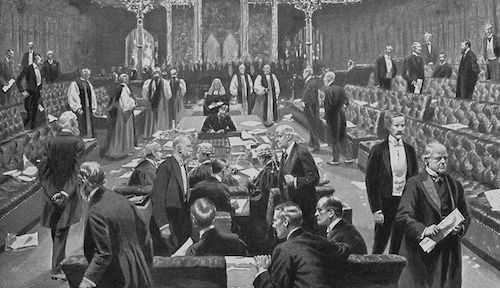 The House of Lords earlier this week.

For reasons known only to Amdocs Ltd. (NYSE: DOX) and like-minded optimists, these new jobs and "more productive tasks" are evidently off limits to AI. This is despite the fact that today's most sophisticated AI systems have trounced humans at its most intellectually challenging games, composed music that audiences cannot distinguish from the classical greats and -- in a more humdrum, white-collar context -- written news stories that would not look out of place on a reputable news wire. (See Automation's Advocates in Downsizing Denial and AI Threat Is Tech's Fart in the Room.)

In trying to assess the impact of AI, scaremongering and doomsday predictions are rarely helpful. But a rose-tinted view of AI could be as dangerous as climate change denial. Along with visions of extreme global warming, society must hope the specter of mass unemployment remains a fiction. At the very least, authorities should consider the possibility it will not. Worryingly, the UK's Lords already appear to have made up their minds. "Many jobs will be enhanced by AI, many will disappear and many new, as yet unknown, jobs will be created," they knowingly conclude in this week's report.

The view that AI will give rise to as many jobs as it destroys is based largely on historical precedent. While successive waves of automation have hollowed out some industries, people have always been able to find jobs elsewhere. The percentage of US workers employed on farms fell from about 50% in the late nineteenth century to just 2% in 2000, for instance. Yet this attrition has not led to widespread unemployment because new industries and roles have sprouted.

The automation that comes with AI bears limited resemblance to the mechanization that arrived in the nineteenth century and the computerization that began in the late twentieth, however. In the past, technology has always remained a tool in the hands of a worker. The nineteenth-century power loom drove the traditional weavers out of business, but could not operate itself. A telco's software-based network has needed a human programmer for upgrades, even if it is less reliant on field technicians. With AI, the tool itself is cognitive and self-managing. Human intervention is neither required nor desirable. (See The Automation Taboo: Let's Talk About Jobs.)

In the telecom sector, operators have dressed this ugly truth in euphemism when touting their automation expertise. "Why zero touch?" said Mark Lum, the cofounder of Layer 123, an events business, in recently questioning the use of an expression that has gained popularity across the industry. "Because it is more positive than human-free network." In-vogue terms like "closed loop service assurance" and the more dramatic "self-driving network" anticipate the telco's dazzling emergence from the chrysalis of automation without dwelling on the human cost.

A few players have spoken up, though. Perhaps the most notable example is that of Norway's Telenor Group (Nasdaq: TELN), whose CEO this year said that automation and digitization would claim one in five jobs at his organization over the next three years. In the public glare, most other executives have awkwardly sidestepped the employment issue. Yet behind the anonymity of an online survey, they can make their opinions known: Recently asked by Light Reading what the main reason was for automating network operations, nearly one third of 262 survey takers picked "reducing headcount," making it the most popular of six available responses. (See Downsizing Telenor Pins Margin Hopes on Automation, 'Brutal' Automation & the Looming Workforce Cull and Automation Is About Job Cuts  LR Poll.)

Next page: The Lords are leaping to conclusions

HOW IS RPA+AI TRANSFORMING TELECOMMUNICATIONS?
Keeping Us Digitally Connected During the COVID-19 Crisis
How Qualcomm Uses RPA to Avoid Costly Errors in Finance & Accounting
With Discovery Bot, Were automating automation!
e-Book - Transforming Telecommunications with Intelligent Automation
More Blogs from Morris Lore
Banning Trump and Parler is not for big tech to decide