Son Strikes Back With $108B Vision Fund 2

Masayoshi Son's plan for world domination through artificial intelligence has gone into overdrive, with the Japanese billionaire and SoftBank founder today announcing a second multi-billion-dollar technology investment fund to sit alongside the original Vision Fund.

The new vehicle, imaginatively called Vision Fund 2 (but disappointingly omitting any "Son strikes back" subtitle), already appears to have raised $108 billion after securing commitments from a who's who list of technology firms and investors.

In a short release about the latest move, SoftBank said it had signed memorandums of understanding with Apple, Foxconn and Microsoft besides various Japanese and international financial institutions, including Standard Chartered Bank, Sumitomo Mitsui Banking Corporation and the National Bank of Kazakhstan. It is pouring $38 billion of its own money into the fund. 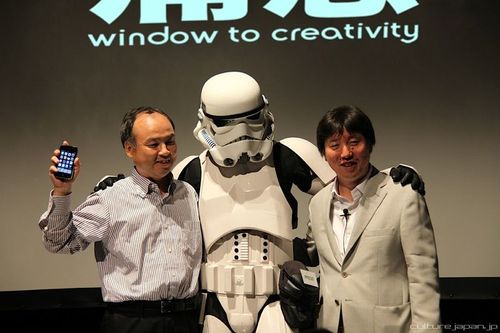 Masayoshi Son (left) gets in touch with his dark side.

But the size of the fund is expected to grow further and could ultimately dwarf the $97 billion Vision Fund. "Discussions are ongoing with additional participants in the Fund," said SoftBank. "The total anticipated capital contribution to the Fund is expected to increase."

Much like the Vision Fund, which has reportedly invested about $70 billion in 80 companies so far, Vision Fund 2 will invest in firms at the very cutting edge of technology. Artificial intelligence is an obsession for Son: The Japanese business leader talks enthusiastically about the "singularity," the moment when machines overtake humans on the intelligence scale, and envisages robots with IQs of 10,000.

"The objective of the Fund is to facilitate the continued acceleration of the AI revolution through investment in market-leading, tech-enabled growth companies," said SoftBank in its statement about Vision Fund 2.

The future Son envisages raises important questions about the opportunities that will remain for humans, he has acknowledged. But he's pressing ahead anyway, determined to be the driving force behind that AI revolution.

In that respect, the first Vision Fund may not have worked out as planned. It is backed mainly by sovereign wealth funds in Saudi Arabia and the United Arab Emirates, limiting the influence of SoftBank and Son. Some parties also distanced themselves from Saudi investors after the murder of journalist Jamal Khashoggi last October at the Saudi consulate in Istanbul -- allegedly on the orders of Saudi Crown Prince Mohammed bin Salman.

SoftBank is certainly making a bigger commitment to this second Vision Fund. Its initial investment of $38 billion compares with the $28 billion it said it would commit to the original vehicle. That could translate into greater influence for Son.

But supporting that kind of investment will be tricky. There is speculation that SoftBank may sell more shares in Alibaba, a Chinese ecommerce giant, to raise funds. The long-awaited merger between US mobile operators T-Mobile and Sprint, a SoftBank subsidiary, could also free up capital -- handily, that deal has just been approved.

Companies in which Vision Fund has invested include Uber, the developer of the eponymous ride-hailing mobile app, and WeWork, which provides office space for technology startups.

SoftBank raised money for that fund through an initial public offering in late 2018. It also transferred a 25% stake in ARM, a UK semiconductor company it bought in 2016, to the Vision Fund.