Comcast Uses AI to Clamp Down on Cyber Threats

Adding an enterprise-level offering as well as opening up a new revenue stream for its consumer broadband service, Comcast has introduced a digital home security service that uses machine learning and artificial intelligence techniques to spot malware intrusions and potentially hacked IoT devices.

The service, called Xfinity xFi Advanced Security, then takes things a step further. It automatically blocks and contains any identified suspicious activity and directs the customer how to resolve the threat to the in-home WiFi network.

Comcast Corp. (Nasdaq: CMCSA, CMCSK) is hawking the new service for $5.99 per month. It's been integrated with Comcast's xFi home network management platform (think of it as X1 for broadband) and ties into the MSO's whole-home WiFi platform, which leans on its line-up of DOCSIS 3.0 and DOCSIS 3.1 gateways and xFi "Pods" that were developed in partnership with Plume Design Inc. . Xfinity xFi Advanced Security is another example of new broadband-focused offerings from cable operators that look beyond just speeds and feeds. (See Will Plume's Open Source Plan Pay Off? and Comcast Unlocks xFi-Powered Smart Home and Consumer Broadband Focus Shifts From Big Billboard Speeds to a Broader, Whole-Home Experience .)

Comcast, which introduced the new service at this week's CES in Las Vegas, is using AI elements to monitor and block security threats looking to enter the customer's home WiFi network. If a cyber threat is identified, the xFi app tells the customer what steps to take to mitigate it. The alert element is an opt-in component. 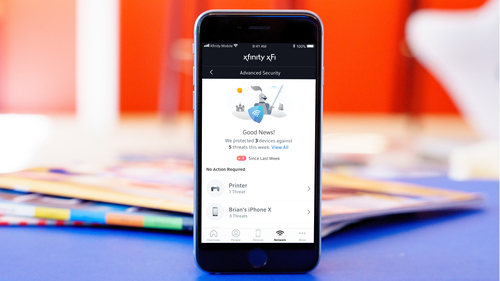 Comcast's new xFi Advanced Security product uses a simple user interface to inform customers of blocked threats and, if necessary, instructions on how to secure other potentially affected devices on the home network.

The general idea is to bring an enterprise-level security offering to a platform designed for average consumers amid the flood of OTT devices, including video streaming boxes, gaming consoles, smartphones and tablets, as well as smart locks, connected cameras and other IoT devices that are being added to the home network, explained Eric Schaefer, SVP and GM, broadband, automation and communications, at Comcast Cable.

The system looks not just for distributed denial-of-service attacks but is also on the lookout for hackers that are seeking to expose open ports on consumer home networks, he noted.

AI, machine learning adds smarts to security
The AI element uses data from the roughly 15 million gateways on the Comcast network to monitor for those threats. The analysis includes the monitoring of WiFi traffic patterns by specific devices on the home network known to the system without requiring the customer to input that information manually. That intelligence tells Comcast's security system if devices are behaving normally or if that data shows irregularities or possible security, hacking or piracy threats. (See How Comcast Used AI to Make Its X1 Voice Remote Bilingual .)

If a connected camera that normally communicates with an IP address in Sunnyvale, Calif., for example, started to send data outside the country, that would prompt an alert and the possible shutdown of that port. The same would occur if a website considered "safe" was found to have a malicious link embedded within it.

If the potential for harm or a suspicious device is identified, the action is blocked and a notification is then pushed to the customer about the nature of the threat, how to unblock what's been blocked and what specific action to take. Or the customer can decide not to take any action. The customer, Comcast said, would decide how to handle the threat based on the data supplied by the company's new security system.

"This is not playing Big Brother. It's really about giving the consumer a level of control," Schaefer said. "The power of this platform is giving enterprise-grade features to an average Xfinity consumer."

Similar to its partnership with Plume, Comcast developed the AI and machine-learning portion of the new cloud-based offering in conjunction with Cujo AI, a Mountain View, Calif.-based startup that recently closed a strategic "B" funding round led by Charter Communications Inc. . Cujo has a standalone retail product (last month, Cujo AI announced that its technology was in 16 million homes), but Comcast has adapted and enhanced it for xFi, Schaefer said. Cujo AI has raised about $8.5 million, according to CrunchBase.

Idea is catching on in cable
This idea is not new, even in the cable arena. In November, CableLabs , the Colorado-based cable R&D organization, introduced a "Micronets" framework for home IoT security. Under that proposed system, the home network would be re-architected into smaller segments that can be managed individually and dynamically. If a threat emerges, the possibly compromised device is placed into a separate micronet to limit the damage until a solution can be found. CableLabs estimated then that technology rollouts of the Micronets framework were still one to three years away. (See CableLabs Erects 'Micronets' Framework for IoT Security .)

Schaefer acknowledged that Comcast's approach is similar to that of CableLabs. But he held that the MSO's product is quite a bit further ahead, given that it fits into the existing, widely deployed xFi platform. "This is really just flipping a software module," he said.

Comcast also believes that the size and scope of its device intelligence creates an advantage over retail online security products. "It's hard to train your AI without these massive data links," Schaefer said.

Comcast is launching xFi Advanced Security nationwide this week to any of the 15 million-plus homes with an xFi gateway. The debut follows consumer trials conducted in one of Comcast's systems in the southern US. Schaefer said the new offering is already up and running in "thousands" of households.