Two years ago Vodafone UK's customer services operation -- by its own admission -- was a mess. Following the bungled migration of customers on to a new billing platform, the mobile operator's net promoter score (NPS), a keenly watched measure of customer satisfaction, fell in 2015 to -35 on a scale where -100 equals rage and 100 means bliss. Customer complaints rose to about four times the industry average in November that year. "It was not a great place to be," says Neil Blagden, Vodafone UK's customer operations director, during a press briefing in London.

Hired from insurance company Direct Line to clean things up, and relishing a challenge, Blagden has been busy hauling that operation back onto its feet. In each of the last 18 months, Vodafone UK has made about 100 fixes and improvements to its systems. It has closed 12 underperforming contact centers that were supporting the UK business, leaving it with 21 currently, and halved the volume of calls it receives. In April, its NPS was up at 26, having risen more than 60 points since November 2015.

Clearly, Vodafone is still some way from nirvana. The number of complaints it receives still tracks slightly above the industry average, for example. But the turnaround has undeniably been impressive. Having mopped up so successfully, Blagden is now looking to give Vodafone a full digital makeover and transform the company into a customer services leader.

It has started on that digital journey through investments in a messaging platform called Message Us and an artificial intelligence (AI) system branded TOBi. Already "live" with some customers, those technologies are to be rolled out more widely in the next few months. Vodafone is also due to unleash a new voice biometrics system and a voice assistant that will be compatible with Amazon.com Inc. (Nasdaq: AMZN)'s Alexa software and Echo speaker. If they live up to their promise, all four innovations could turn Vodafone into a much sleeker animal more loved by its customers.

Rise of the Machines 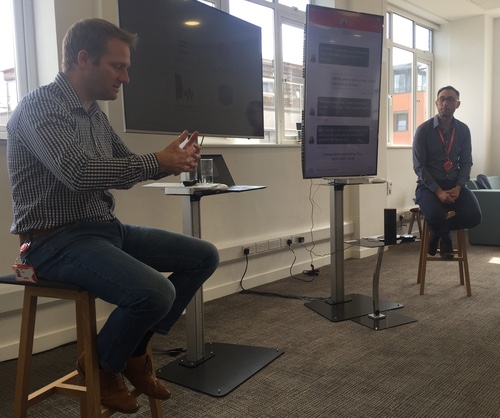 Partly because of its obvious implications for employee numbers, TOBi is perhaps the most eye-catching of the four. Based on IBM's Watson technology, it has already been integrated with Vodafone's web chat systems and will respond to queries over a messaging platform much like a human advisor. Vodafone is not trying to hide its real "chatbot" identity from customers, however, and is making human assistance available as needed, including when the AI detects signs of frustration in customer messages (it currently understands what customers need help with about 90% of the time, Vodafone claims).

Even so, the big plan is to ensure, by the end of the year, that TOBi can handle most queries a customer might have. Richard Clarke, Vodafone UK's head of contact transformation, says there are about 150 "intents" in the overall customer service estate, of which TOBi should eventually be able to cope with 112. About 30% of the operator's customers already use TOBi on a more limited basis, but that percentage should also be much higher by the end of 2017. And beyond that date, there are "multiple other channels where TOBi could sit and help," says Blagden, including in Vodafone's interactive voice response (IVR) technologies.

How TOBi gets on in the UK is important from an organizational perspective because Vodafone Group plc (NYSE: VOD) wants to use it in other markets, too. That portends a big shake-up of customer service operations globally. Unsurprisingly, given the growing concern that technology is destroying jobs, Blagden is coy about the impact TOBi could have on staff numbers. But he acknowledges that it raises major questions about investments in staff and staff training. "There is a big human question in terms of the roles of agents and advisors," he says. "There will be implications, but for me it is also about the nature of the advisor role and how that changes. If TOBi can take away the high-volume transactional activity then what is left over is more case-managed and specialist, where there is a need for more investigation."

From Vodafone's perspective, another TOBi attraction is that IBM Corp. (NYSE: IBM) charges for the Watson technology on a software-as-a-service basis, enhancing its economic appeal. "The cost is very cheap compared with human infrastructure and contact centers," says Clarke.

Blagden is not drawing a link between Vodafone's plan to shut down further contact centers and the rollout of TOBi and other digital systems. But if the AI technology takes off in the short term, it could make closing those facilities a lot more straightforward. By March 2019, Vodafone aims to have just ten "core" sites handling the customer service needs of the UK business, including six in the UK and another four spread across Egypt and India.

Check out this blog by Nvidia: "Machine Learning at its most basic is the practice of using algorithms to parse data, learn from it, and then make a determination or prediction about something in the world. So rather than hand-coding software routines with a specific set of instructions to accomplish a particular task, the machine is "trained" using large amounts of data and algorithms that give it the ability to learn how to perform the task."
Reply | Post Message | MESSAGES LIST | START A BOARD

Phil_Britt 7/19/2017 | 1:27:59 PM
Re: Vodafone Customer Service "was" a mess The AI will do nothing more than a low-level contact center employee. I will work down a decision tree, meaning it doesn't skip steps, nor can it handle anything not on the tree.
Reply | Post Message | MESSAGES LIST | START A BOARD

sarcher60555 7/19/2017 | 11:16:08 AM
Vodafone Customer Service "was" a mess Still is.  Try getting ahold of someone to explain over charges and roaming fees.
Reply | Post Message | MESSAGES LIST | START A BOARD
EDUCATIONAL RESOURCES