Despite its status as the world's most valuable firm, Apple has for some time been thought to lag its biggest rivals in developing one of today's most valued technologies. In the artificial intelligence (AI) battle, it still looks a relative weakling next to the likes of Amazon and Google.

No wonder that when Light Reading polled readers in February, asking them what Apple Inc. (Nasdaq: AAPL) should spend its billions on, the most popular response was artificial intelligence and machine learning. But Apple this week may have found a far less costly way of closing the AI gap. Rather than splurging billions on touted AI startups, it has poached one of the smartest AI experts from one of its main competitors.

What Should Apple Spend its Billions On? 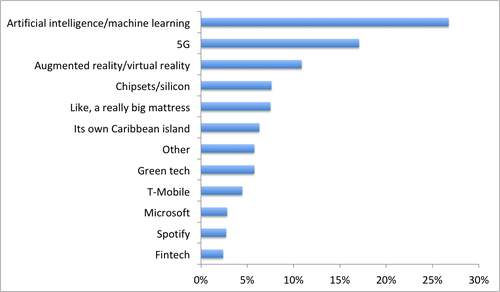 According to a report from the New York Times (NYT), the executive in question is none other than John Giannandrea, the head of search and artificial intelligence for Google. Henceforth, Giannandrea will take charge of Apple's own machine learning and AI strategy as one of 16 Apple executives who report directly to CEO Tim Cook, reports the NYT.

Giannandrea appears to have joined Google (Nasdaq: GOOG) in 2010, when the search engine giant beefed up its search capabilities with the acquisition of a startup called Metaweb. The company then employed Giannandrea as chief technology officer. Following the takeover, he is reported to have worked on integrating AI into Google's various services, and has been in the ascendant as AI's importance has grown. He has even had an office next to Google CEO Sundar Pichai, according to the NYT.

While Apple will not have to spend billions on acquiring Giannandrea, rather than AI startups, he is likely to be well compensated by the iPhone maker. As some of the most in-demand technology wizards in the market, AI experts command salaries that sometimes exceed eight figures, according to reports. An immediate priority at Apple will be to knock Siri into shape. The company's voice-activated digital assistant, Siri has recently been a disappointing experience next to Alexa from Amazon.com Inc. (Nasdaq: AMZN) and Google Assistant.

In the long run, Giannandrea and his cutting-edge software skills may have a major role to play in Apple's reinvention. That a hardware company is the world's most valuable firm in the software age is paradoxical, as Apple is undoubtedly aware. It is not that Apple lacks software expertise: Its capabilities are evident in the operating systems and applications that run across its range of devices. But few would call it a software player. Sales from software-based services accounted for less than 30% of the $52.6 billion Apple made in its last financial quarter, while the iPhone was responsible for about 55%. In a post-smartphone era, Apple could be in trouble without a standalone software strategy.

Indeed, while the phone's obsolescence is clearly not imminent, Apple should be as keen to expand outside the devices business as Google is to move beyond browser-based search. Recruiting one of the world's foremost AI experts could aid such an expansion. Bjorn Taale Sandberg, the head of research for Norwegian telco Telenor, believes AI will underpin most industrial processes in the next 20 years. The companies whose AI systems are used in those processes may suck up the profits while others get sidelined. (See Robot Wars: Telecom's Looming AI Tussle.)

Apple's role in that market, as one of the most "closed" technology players in the industry, is far from obvious. While Google, Facebook and even Microsoft Corp. (Nasdaq: MSFT) are happy to see their technologies infuse products and services from telecom operators and other companies, Apple remains largely aloof, building tools that are rarely used outside its own ecosystem. It is for that reason its takeover of Shazam, a popular music-recognition app, is attracting so much scrutiny from European regulators. A service that once directed customers to Spotify, Deezer and other music-streaming apps could eventually restrict them to Apple Music, authorities fear. (See Telefónica Takes Aura AI Tool Into 6 Markets.)

As the NYT reports, Apple also seems more concerned than other technology giants about respecting customer privacy. That could leave it at a technological disadvantage if rivals are happily feeding off and tossing around customer data to improve their AI systems (although Apple has reportedly said it is working on algorithms to overcome this problem).

Even so, were Apple to splash billions on acquiring a major services company such as Netflix, an AI lead could make that service look far more attractive to consumers than any rival offers. And while Apple's AI capabilities might never make it past Apple's ecosystem, they should massively enhance the appeal of existing products and services as competitors step up their game. Samsung phones powered by Google's Android operating system represent the biggest smartphone challenge to Apple. But China's Huawei Technologies Co. Ltd. has emerged as a serious technological contender, even if it lacks Apple's branding appeal. As voice-activated assistants grow more sophisticated and usable, they have the potential to be the deciding factor when a consumer is choosing between different smartphone models. (See Huawei Aims P9 at iPhone 6S Crowd.)

Whether a means of defending Apple's existing product line, or a platform for expansion into new markets, AI expertise is a must-have for the company. Until this week, its shortcomings made Apple look vulnerable and ill-prepared for the coming AI revolution. The recruitment of Giannandrea is a significant step in the right direction.

Joe Stanganelli 4/29/2018 | 10:58:40 PM
Re: Results and hed Meanwhile, more "run-of-the-mill" developers are still in very high demand for substantial salaries. I just attended a developers' conference where exhibitors and presenters were drooling all over themselves in desperation making their hiring announcements. Even Google, Microsoft, and similar companies were pretty actively recruiting.
Reply | Post Message | MESSAGES LIST | START A BOARD

kq4ym 4/17/2018 | 12:41:36 PM
Re: Results and hed While Apple may bite you, it appears the new guy is taking a big bite from the Apple with the speculation that "AI experts command salaries that sometimes exceed eight figures." Now my figuring is that means at least tens of millions. Now that's a big bite from even the largest of an apple.
Reply | Post Message | MESSAGES LIST | START A BOARD

That said, Apple appears to be on track with some aspects of this poll, considering their announcement of replacing Intel chips with their own chips by 2020, in light of the fourth-place result of silicon/chipsets.

As for the pun in the hed? Nice. All that's missing is a Yakov Smirnoff type of joke. ("In Soviet Russia, Apple bites you!")
Reply | Post Message | MESSAGES LIST | START A BOARD
EDUCATIONAL RESOURCES