Unless that person has the brain of Albert Einstein, anyone applying for a job on the operations team of Rakuten Mobile will be sorely disappointed. Japan's youngest mobile network has implemented a hiring freeze in that department after reaching the grand total of 250 employees, a fraction of the number that a normal operator would have. Provided the network keeps running, the implications for other operators and their staff are alarming.

Under the leadership of Tareq Amin  promoted to CEO from chief technology officer earlier this year  Rakuten Mobile has been rolling out what may qualify as the most automated telecom network on the planet. Basestations and other bits of equipment have been shorn of all but the most essential components. Jobs previously done by field technicians are increasingly handled through software upgrades. The engine noise of the truck roll has been replaced by the tapping of a keyboard.

The hiring freeze means just 250 people are today responsible for maintaining a network that covers 97% of the Japanese population. They are, in Amin's words, the only employees at the company "who really touch the network," looking after functions such as the IMS (Internet Protocol multimedia subsystem) core and packet core as well as any radio engineering. This leaves another 850 employees in core engineering, project management and admin roles under Sharad Sriwastawa, Amin's successor as chief technology officer, for an overall team of 1,100 people. 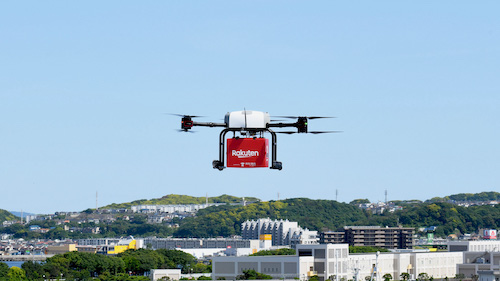 The Japanese company is taking automation to the extreme.
(Source: Rakuten)

"Sharad doesn't have the traditional business units, so I don't have field technicians  those resources in mobile do not exist," said Amin on a recent call with analysts and reporters. "My premise is that if there are no electronics to maintain, then the people required for traditional functions like preventative maintenance disappear."

Automation has been facilitated partly by Rakuten's deployment of a cloud RAN (radio access network). Most traditional networks pair radio units with IT resources at the mast. Rakuten has stripped away the IT resources and parked these in data centers sprinkled throughout Japan. In the process, it has been able to cut down on the equipment it needs.

While the latest ratios were not available at the time of publication, one distributed unit (the name of the box that performs most of the baseband processing) is able to serve multiple radio sites. Less manual effort is required to maintain this network, according to Amin. Rakuten has "the ability to do auto healing because we have excess capacity on our compute nodes," he said.

The vision is of a network that ultimately runs itself without any human intervention. "Sharad has a hiring freeze because I want him to be challenged to evolve and not get lazy  to show we are going to get to the end destination of Level 4 autonomy with everything running on its own," Amin said.

This level of extreme automation holds out the promise of a low-cost future. Germany's Deutsche Telekom, an operator that breaks out labor costs in its annual report, last year spent about 18.5 billion (US$19.8 billion) on staff, as much as 27% of its total operating costs (based on deducting EBITDA  earnings before interest, tax, depreciation and amortization  from revenues). By reducing those costs, cutting staff numbers can fatten profit margins and make it hard for rivals to compete.

Rakuten's last few financial reports tell a markedly different cost story. Heavy investment in the nationwide rollout of mobile network underpinned by fiber connections has torn into profits. Until the network is built, Rakuten must also rely on an expensive roaming deal with KDDI in areas it does not cover. For the first quarter, Rakuten Mobile's loss grew 38% year-on-year, to more than 135 billion Japanese yen ($1.1 billion).

Losses may have been lower had Rakuten grown faster. Two years since its commercial launch, it has attracted fewer than 6 million customers, despite offering some free services to Japanese consumers as an enticement to join. The figure puts it a long way behind market leader NTT DoCoMo, which currently serves more than 80 million subscribers.

Rakuten is demanding patience from its investors. Most of the costly work on network deployment is now behind the company, according to Amin, and Rakuten has yet to make a serious push on marketing its mobile offers. Doing so while the network was largely incomplete would have risked a backlash from the finicky Japanese.

With Amin in charge, the next year could be the most interesting in Rakuten Mobile's short history. If all goes to plan, costs should fall, and customer adoption should accelerate. Next year, the operator expects to record a profit for the first time. In the not-too-distant future, the full financial benefits of extreme automation will become apparent  unless the project fails. Among other things, Amin may have to prove Rakuten can function as smoothly with so few technical employees when there are millions more customers on its network.

Success would force other telcos to adapt. Speaking to Light Reading two years ago, when he hoped to cap the size of his operations team at 350 rather than 250, Amin surmised that each of Japan's other operators had thousands of employees in the same area. And the situation is unlikely to be different in other countries. As part of its Symphony offer, Rakuten is now pitching its automation expertise, along with in-house software products, to many of these companies.

Brownfield networks would probably struggle to automate as effectively or as speedily as Rakuten. But major greenfield networks are taking shape in the US (Dish) and Germany (1&1), both of which are customers of Rakuten Symphony. If they can operate their networks with much smaller teams than their rivals use, they could have a big cost advantage.

What's already striking is the disparity between Rakuten's total headcount and that of its Japanese rivals. KDDI, for instance, had 47,320 employees at the end of its last fiscal year, while SoftBank Corp (the telco part of SoftBank) had 47,313. Including all its diverse interests, Rakuten employed 23,841 people in 2020, the last year for which data is available.

Even so, with its small base of telecom subscribers, Rakuten is far behind KDDI and SoftBank on revenues per subscriber, a metric that investors are analyzing as an efficiency indicator. Its figure of about $479,000 annually compares with KDDI's $881,000 and SoftBank's $864,000. How those figures change in the next few years will be telling.