Any company that has just reported a 30% drop in sales and recently sold two businesses for about $9 billion would be expected to shrink its workforce dramatically. But not Huawei. Since 2016, the year Donald Trump was proclaimed US president, it has grown by 25,000 employees. And while the number did fall last year, for perhaps the first time in Huawei's history, only 2,000 jobs disappeared  a mere 1% of the total.

But a full excavation of the data shows the overall increase and subsequent flattening-off was driven by a huge investment in research and development (R&D) while other departments eventually suffered. It is no secret that Huawei outspends rivals in this area and has continued to fatten its annual R&D budget, which has soared 87% since 2016, to more than $22 billion last year. R&D headcount has risen by 28,000 employees over that period  from 46% to 55% of the total. Huawei is morphing into an R&D company.

This commitment to R&D has paid off before. Many European telco executives with experience of the big three equipment vendors continue to rate Huawei ahead of Ericsson and Nokia on technical performance. Huawei would never have grown its market as sharply as it did in the 4G era simply by undercutting rivals. It evidently hopes an even bigger investment in R&D will plant the seeds of recovery. 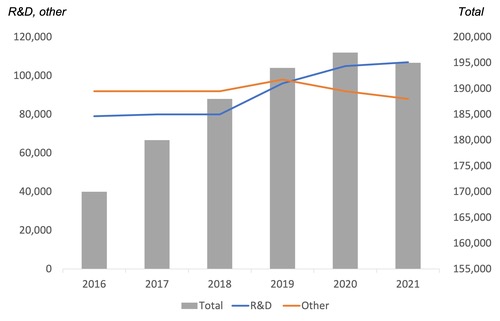 There are two good reasons to be doubtful. The first is that Huawei probably cannot maintain R&D spending at the current level without hurting profits in future. These grew last year, despite huge R&D expenses, only because Huawei booked about $9 billion from the sale of Honor, a smartphone unit, and xFusion, its x86 server business. Calculations show net income would otherwise have dropped 13%.

Huawei might put additional assets up for sale, of course. Further divestments would mean letting go of other device or network units, some of which could wither and die inside Huawei unless it quickly finds the nourishment they need. Local chipmaking expertise is essential, and experts do not think China will have this for several years. Asset sales, meanwhile, would clobber revenues  as they did last year  even if they allow Huawei to boast higher profits.

The other problem is that Huawei built up its huge R&D capability when it was mainly a vendor of telecom hardware. Cut off from essential components by US sanctions, it is pivoting to software. But can thousands of R&D staff  who presumably joined when the focus was on developing better radio units  simply be redeployed? What's more, excluding cloud, the enterprise unit that sells much of this new software reported a drop in sales last year.

Nor will the most brilliant code in the world make up for less advanced components, as Huawei seems to think. "The only way to compensate in software is to use a less sophisticated radio algorithm," Michael Begley, Ericsson's head of product line RAN compute, told Light Reading last year. "That is effectively what you are saying."

To help pay for R&D, Huawei has cut about 10,000 other jobs since 2019, roughly a tenth of the non-R&D total. Yet there is a danger. Huawei built its reputation partly by offering immediate, on-the-ground support to customers across a global business empire when its competitors were struggling to keep up. Even deeper cuts would make this much harder to guarantee.

Huawei is unlikely to be able to save as much in future, as well. In its latest annual report, it claims to have slashed its cost of sales by 42% last year, to just 329 billion Chinese yuan ($51.7 billion). As a result, its gross margin rose an unprecedented 11.6 percentage points, to 48.3%. Meng Wanzhou, the chief financial officer back home after a long detention in Canada, attributed this to changes that will not be replicable year after year.

"We adjusted our product mix in sales, so our sales margin was improved," she told reporters. "We also refined supply planning. Better collaboration has enabled us to shorten the cycle from order to revenue. In addition, as Huawei has accumulated ICT expertise, through digital operations we enhanced internal operational efficiency."

Even if Huawei does have the resources and talent to reinvent itself as a software company, innovation will probably not happen fast enough. More than 80% of its revenues still come from the sale of network products and consumer gadgets. After the sharp drops last year, those revenues will not simply evaporate in 2022, but the products behind them will slowly become less competitive and less appealing to a Western audience. For the next few years, that trend is likely to be irreversible.